Sheema Khan became a director of Hamas-linked / Washington-based CAIR shortly after the incorporation of its Canadian branch CAIR-CAN, of which she was the founding Chair. CAIR-CAN was renamed National Council of Canadian Muslims (NCCM) in 2013.

In its fall 1997 newsletter, the Council on American-Islamic Relations (CAIR), a Washington-based Islamist lobby linked to the terrorist organization Hamas, welcomed a Quebec Press Council ruling about a complaint filed by its Montreal branch against the newspaper La Presse. The name of the complainant, Sheema Khan who acted for CAIR-Montreal at the time, appears in the Press Council’s ruling. Sheema Khan’s complaint pertained to a book review written by journalist Martine Turenne and to an accompanying picture.

In its newsletter, Washington-based CAIR ignored the fact that two parts of Sheema Khan’s original complaint related to the title and the content of the article were dismissed. On August 5, 1997, La Presse published a short article devoted to the Press Council’s ruling with the following headline: “The Press Council does not give any blame to La Presse” (“Le Conseil de presse ne retient aucun blâme contre La Presse”). 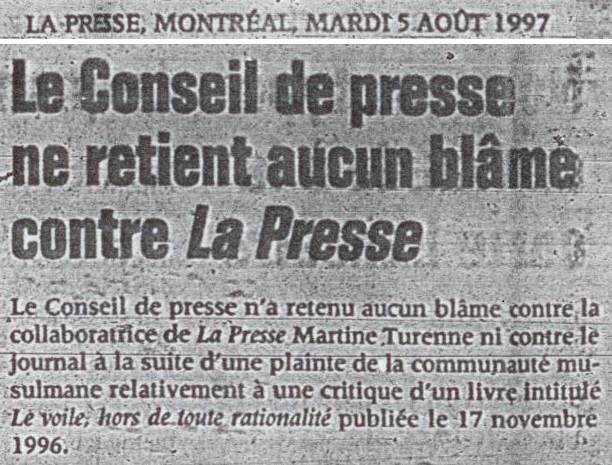 In 1997, La Presse considered that it was cleared by the Quebec Press Council’s ruling following a complaint by Sheema Khan of the Council on American-Islamic Relations.

Washington-based CAIR started its Canadian activities in Montreal in 1996, and then moved to Ottawa. At the time, the end of CAIR-Montreal’s activities and the beginning of CAIR-Ottawa’s coincided with Sheema Khan’s move from Montreal to Ottawa. In 2000, CAIR-Ottawa became CAIR-CAN when the organization was incorporated with Industry-Canada.

In its 2005 annual review, CAIR-CAN / NCCM described its early history as follows:

In 1996, a group of concerned Canadian Muslims started an informal network in Canada to work with the Washington-based CAIR, an organization well known among Canadian Muslims since 1994. In the spring of 1997, CAIR-Montreal was formed, and was soon after replaced by CAIR-Ottawa. In 2000, CAIR-CAN was incorporated as a Canadian organization speaking out for Canada’s Muslim population.

Shortly after CAIR-CAN’s incorporation, its Chair Sheema Khan was appointed on the Board of the parent organization in Washington, often referred to as CAIR National.

In July 2013, CAIR-CAN changed its name to become the National Council of Canadian Muslims (NCCM). At the time, Point de Bascule pointed out that the name change was likely motivated by CAIR-CAN’s desire to cover its links with Washington-based CAIR, an organization whose links with the terrorist organization Hamas have been acknowledged by U.S. Courts. Point de Bascule based its comment on various hints, including a CAIR-CAN / NCCM document accompanying the July 6, 2013 name change official announcement stating that “There was never any operating or funding relationship between CAIR.CAN and CAIR.”

Another reason that could have led CAIR-CAN to change its name is that, throughout the years, many Washington-based CAIR leaders have been convicted for various criminal offenses. Investigative Project, GMBDW, Robert Spencer, Daniel Pipes, Pamela Geller and others have extensively documented this issue.

In January 2014, CAIR-CAN / NCCM initiated the required procedures for a defamation lawsuit against the Prime Minister Harper’s office after his spokesman described NCCM as “an organization with documented ties to a terrorist organization such as Hamas.”

If this issue were to finally end up in court, a judge will have to determine whether there is a relationship between CAIR-CAN / NCCM and Hamas. Point de Bascule publishes the present article as another item documenting this relationship.

CAIR-CAN / NCCM leadership does not claim that the nature of the operating relationship between CAIR-CAN / NCCM and Washington-based CAIR could have changed over the years but that this relationship simply never existed. The extent of this misleading assertion should help the Prime Minister Harper’s lawyers demonstrate the claimant NCCM’s bad faith in this defamation suit.

Here are three recent articles by Point de Bascule that delved with the relationship between CAIR-CAN / NCCM and Hamas and provided the appropriate references:

Point de Bascule (June 5, 2014): September 1, 2001 – The Globe and Mail identified Sheema Khan as “chairwoman of the Canadian branch of the Washington-based Council on American-Islamic Relations” 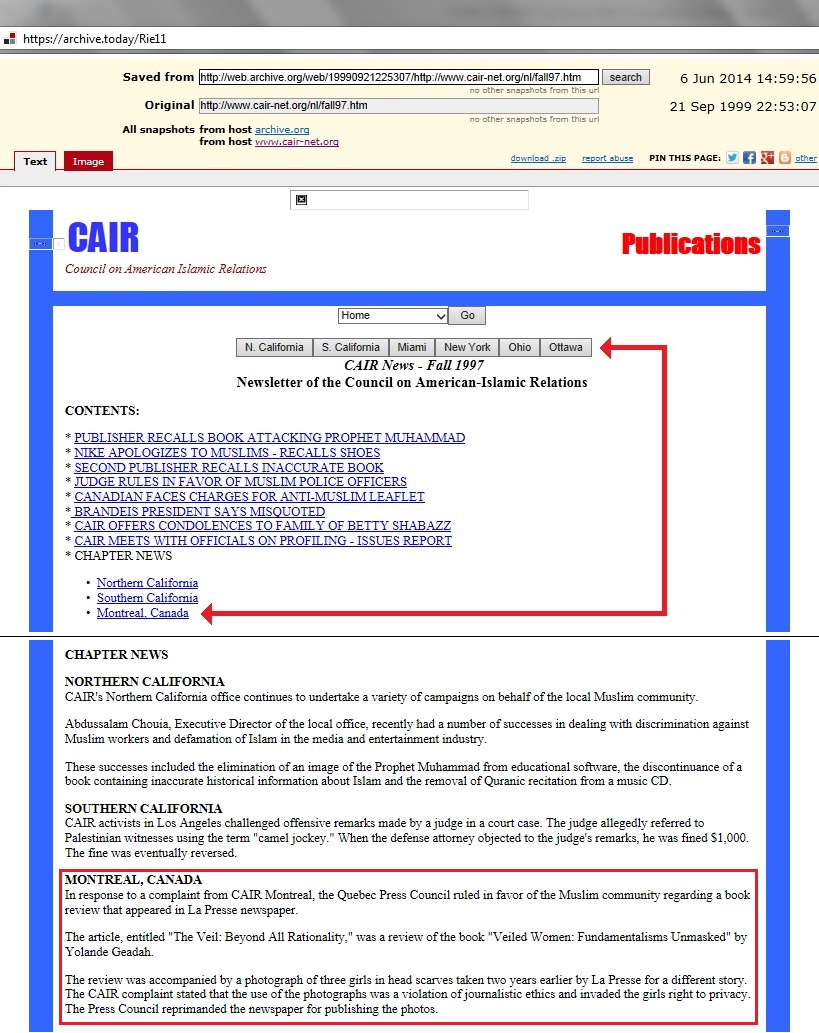 Excerpt of a newsletter published by Washington-based CAIR in the fall 1997. The integral version of the newsletter is archived on Point de Bascule.

The first excerpt identifies CAIR-Ottawa and CAIR-Montreal as two branches of Washington-based CAIR. All other branches mentioned are in the United States. At the time, the end of CAIR-Montreal’s activities and the beginning of CAIR-Ottawa’s coincided with Sheema Khan’s move from Montreal to Ottawa.

The second excerpt reports the Quebec Press Council’s ruling on the complaint filed by Sheema Khan of CAIR-Montreal. The item does not mention, however, that parts of the original complaint against La Presse were dismissed by the Press Council.

Although our main motivation when we published this article was to highlight CAIR-CAN / NCCM founder Sheema Khan’s relationship with Washington-based CAIR, it is opportune to examine the grievances that she submitted to the Quebec Press Council against La Presse in 1996.

[Translation by Point de Bascule] Ms. Sheema Khan files a complaint against journalist Martine Turenne and the newspaper La Presse for having conveyed racist and distorted comments about the Muslim religion and more specifically about the wearing of the Islamic veil.

She denounces the title of the article “The veil, beyond all rationality” as racist and prejudicial to the religious practice of wearing the veil.

She is outraged by the parallel drawn by the journalist between fundamentalism and Nazism. According to her, Martine Turenne and Yolande Geadah are wrong when they present fundamentalism as an absolute compliance with the faith and the religious rules. By doing so, Ms. Turenne is associating a large portion of the Quebec population to Nazis, she points out, which is highly reprehensible.

She mentions, finally, that La Presse used a two-year old photo with no connection to the subject as illustration for its November 17, 1996 article and, furthermore, without the consent of the two young girls who were shocked and hurt by the publication.

She adds to her complaint letters by the two young girls who defend the Islamic religion and highlight important errors of interpretation made by the journalist and the writer.

In order to refute Sheema Khan, it should be noted that, before being exposed by outside observers, the connection between Nazism and the doctrine propagated by the Muslim Brotherhood and other Islamists was first evoked by the Islamists themselves. In his book To what do we summon mankind?, that was none other than Hassan al-Banna (1906-1949), the founder of the Muslim Brotherhood, who presented Hitler as a model for Muslims looking for fortune, influence and success. Among the models presented by al-Banna in this text, Hitler is the only non-Muslim. The others are Ali (600?-661), al-Abbas (647?-680), the war leader Saladin (aka Salah al-Din 1137?-1193) and the King Abdul Aziz Al Saud (aka Abd al-Aziz Al Suud 1876-1953), the founder of Saudi Arabia.

Last February, Point de Bascule identified three important CAIR-CAN / NCCM leaders who openly endorsed al-Banna in the past in spite of his admiration for Hitler and his own totalitarian ambitions: current NCCM director Khadija Haffajee is one of them; Jamal Badawi and Wael Haddara are the others.

When the New York Times announced Hassan al-Banna’s death in 1949, it also highlighted the fact that his Muslim Brotherhood organization “had taken on the character of a political movement with mystic and fascist overtones.”

Another Muslim Brotherhood leader who has openly endorsed Hitler is their current spiritual guide Youssef Qaradawi. In the following excerpt, Qaradawi endorses Hitler for the extermination campaign that he waged against the Jews. He presents Hitler as God’s envoy. Furthermore, Sheema Khan herself, who complains when a connection is established between Nazis and Islamists, endorsed Youssef Qaradawi in a 2002 Globe and Mail column by describing him as a “renowned Muslim scholar.” Another important CAIR-CAN / NCCM leader (at least from 2001 to 2013), Jamal Badawi, occupies a leadership role in at least two international Islamist organizations led by Youssef Qaradawi: the International Union of Muslim Scholarsand the European Council for Fatwa and Research.

Here is how Youssef Qaradawi praised Hitler on Al-Jazeera in 2009:

Throughout history, Allah has imposed upon the [Jews] people who would punish them for their corruption. The last punishment was carried out by Hitler.

[…] He managed to put them in their place. This was divine punishment for them. Allah willing, the next time will be at the hand of the believers. […] To conclude my speech, I’d like to say that the only thing I hope for is that as my life approaches its end Allah will give me an opportunity to go to the land of Jihad and resistance, even if in a wheelchair. I will shoot Allah’s enemies, the Jews, and they will throw a bomb at me, and thus, I will seal my life with martyrdom. Praise be to Allah.”

In order to counter CAIR-CAN / NCCM’s defamation lawsuit, it would be advantageous for the Prime Minister’s lawyers to stress that the endorsement of al-Banna and Qaradawi by CAIR-CAN / NCCM leaders does constitute a fourth type of link with Hamas: an ideological one.

Like CAIR-CAN / NCCM leaders who refer to Hassan al-Banna as a guide who inspires their action, Hamas also endorses al-Banna. In the very first lines of the Hamas’ charter, al-Banna is quoted to justify wiping out Israel from the map: “Israel will exist, and will continue to exist, until Islam abolishes it, as it abolished that which was before it.” In the article 2 of its charter, Hamas also presents itself as a branch of the Muslim Brotherhood, the organization that was founded by Hassan al-Banna.

Also, like Sheema Khan when she was CAIR-CAN / NCCM Chair in 2002, Hamas considers Youssef Qaradawi as a “renowned Muslim scholar.” Throughout the years, Hamas relied on Qaradawi’s fatwas justifying suicide operations to organize attacks against civilians in Israel. On July 16, 2013, Hamas even threatened to launch terrorist attacks in countries where Israel embassies are located. Canada is among the potential targets, of course. Apart from being engaged in the destruction of Israel, in recent years Hamas leaders have frequently advocated the Islamic conquest of the West (2008 – 2011 – 2012).

In 2009, CAIR-CAN / NCCM ally, IRFAN-Canada, Hamas’ fund collector in Canada, organized a fundraising event in a hall belonging to the Muslim Association of Canada (MAC) in Montreal. For the occasion, they invited Ekrima Sabri, the former mufti of Jerusalem, to give a speech. Like Qaradawi, Sabri promoted the suicide operations in 2000 by stating that “The younger the martyr – the greater and the more I respect him.”

The 1997 Quebec Press Council’s ruling highlights that the newspaper La Presse, represented at the time by its vice-president and associate editor Claude Masson, gave its “full support” to journalist Martine Turenne’s position while she was defending herself against the Islamist lobby CAIR’s complaint.

The tactic used by CAIR against Martine Turenne and La Presse in 1996-1997 has been used on many occasions since against other commentators who try to inform about the Islamist threat and to limit its progression. Their tactic consists in trying to make those who criticize the Islamists and their doctrines pass for racists who go after Muslims in general and to call them Islamophobes.

In her defense in front of the Press Council, Martine Turenne clearly stated that she never compared Muslims in general to Nazis but that she limited herself to comparing Nazism with the political version of Islam that was exposed in her article.

Point de Bascule: File CAIR-CAN / NCCM (A subsection of the file entitled Complaint from CAIR-Montreal against La Presse at the Press Council contains seven documents directly related to the complaint filed by Sheema Khan against La Presse in 1996.)