In July 2013, CAIR-CAN changed its name to the National Council of Canadian Muslims (NCCM). At the time, Point de Bascule pointed out that the name change was likely motivated by CAIR-CAN’s desire to “cover its links with the Washington-based / Hamas-linked organization [CAIR].”

Over the years, U.S. tribunals and commentators have frequently stressed the existence of links between Washington-based CAIR and Hamas. In 2002, for example, an American judge presiding over the case Holy Land Foundation for Relief and Development v. Ashcroft concluded that the “Islamic Association for Palestine (“IAP”), has acted in support of Hamas.” CAIR was established in 1994 by three leaders of the Islamic Association of Palestine.

Since the name change, CAIR-CAN / NCCM Executive Director Ihsaan Gardee frequently repeated that his organization has never had any operational relationship with Washington-based Council on American-Islamic Relations (CAIR). When asked by CBC’s Evan Solomon to explain why both organizations shared the same name then, Gardee answered that “the name of the organization was originally CAIR-CAN because CAIR in the U.S. is a well-known, well-recognized Muslim civil liberties organization. But we are two separate and distinct organizations. We always have been. […] We never had an operational relationship.”

NCCM’s leadership did not claim that the nature of the operational relationship between Washington-based CAIR (aka CAIR National) and CAIR-CAN (now renamed NCCM) could have changed over the years, but that it never existed. Period.

This is a rewriting of history, of course. Shortly after the name change in July 2013, Point de Bascule quoted some of CAIR-CAN’s own documents contradicting Gardee’s statement. A 2003 Journalist’s Guide to Islam conceived by CAIR-CAN (p. 15), described Washington-based CAIR as “CAIR-CAN’s parent organization” (p. 14). In December 2003, then CAIR-CAN Chair Sheema Khan swore an affidavit supporting Washington-based CAIR in a legal trade-mark battle stating that it “has direct control” over CAIR-CAN’s activities in Canada.

There are also numerous documents published by Washington-based / Hamas-linked CAIR identifying CAIR-CAN as one of its branches.

When CAIR-CAN / NCCM’s relationship with CAIR, Hamas and other Muslim Brotherhood-linked organizations is brought up, its Executive Director Ihsaan Gardee is quick to refer to his organization’s public record and repeat that “NCCM’s entire body of work is public,” implying that those who will search his organization’s past documents will find a confirmation of his denials.

In fact, less and less of CAIR-CAN / NCCM’s body of work is public. After the organization changed its name, it did not rename its old website but created a new one. Those who enter the old address http://www.caircan.ca/ will be redirected towards the new website but will not find the old content. All the old CAIR-CAN documents (including those embarrassing ones proving its links to CAIR, Hamas and the Muslim Brotherhood) became unavailable after they were recently erased from the Google cache. In order to find older CAIR-CAN documents, it is necessary to search archiving websites, other websites unrelated to CAIR-CAN / NCCM and old newspapers.

One such older document of interest that is exclusively accessible on archiving websites was originally published by Washington-based CAIR in 2000. It is the announcement of Sheema Khan’s appointment to CAIR’s Board of directors after CAIR-CAN had been incorporated. The press release confirms that Sheema Khan was already “head of CAIR-CAN, the council’s new Canadian office in Ottawa” when she was appointed to the board of its Washington-based parent organization.

This is another proof of the existence of an “operational relationship” between CAIR and CAIR-CAN.

When the CAIR-CAN’s name change was announced in July 2013, Sheema Khan made a point of participating in the activities that were organized in Ottawa for the occasion. Recently, Ihsaan Gardee invoked Sheema Khan’s name to deny that the Muslim Brotherhood could have had anything to do with the establishment of CAIR-CAN in 2000.

(OTTAWA, CANADA, 8/7/2000) – Dr. Sheema Khan has been appointed to the national board of directors for the Council on American-Islamic Relations (CAIR), a Washington-based Islamic Advocacy group. Khan is head of CAIR-CAN, the council’s new Canadian office in Ottawa, Ontario.

Khan has been active with CAIR in Canada for the past four years, first with CAIR-Montreal and then as director of CAIR-Ottawa. She has a master’s degree in physics and a Ph.D. in chemical physics, both from Harvard University. Khan currently works as a senior research scientist with a pharmaceutical firm in Montreal.

Hansard (September 20, 2005): CAIR-CAN Executive Director hails Jamal Badawi as “perhaps one of the best North American Islamic scholars, if not the premier.” (Badawi is a leader of numerous Muslim Brotherhood organizations in Canada and abroad and has been a CAIR-CAN director from 2001 to 2013.) 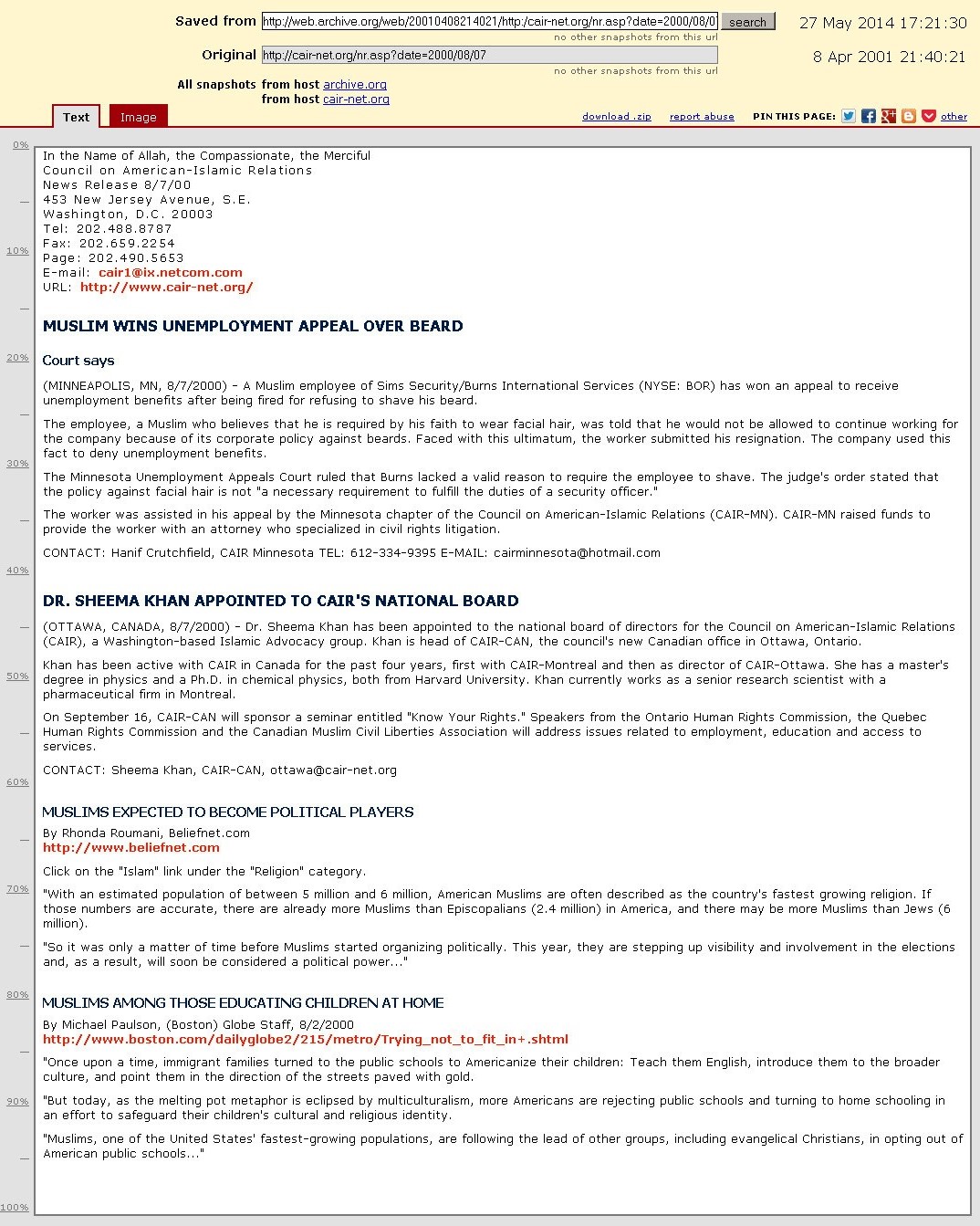