September 1, 2001 – The Globe and Mail identified Sheema Khan as “chairwoman of the Canadian branch of the Washington-based Council on American-Islamic Relations”

U.S. tribunals have acknowledged the relationship between Washington-based CAIR and Hamas. Given CAIR-CAN’s defamation suit against PM Harper’s office for having evoked the relationship between CAIR-CAN / NCCM and Hamas, it becomes all the more relevant to stress that CAIR-CAN was established as a branch of Washington-based CAIR. This is one of many ways to demonstrate CAIR-CAN’s relationship with Hamas. When in July 2013, CAIR-CAN changed its name to the National Council of Canadian Muslims (NCCM), Point de Bascule pointed out that the operation was likely motivated by CAIR-CAN’s desire to “cover its links with the Washington-based / Hamas-linked organization [CAIR].”

In January 2014, a spokesman for Prime Minister Harper’s office described CAIR-CAN / NCCM as an “organization with documented ties to a terrorist organization such as Hamas.” At the time, the NCCM retorted that the statement was “absolutely false” and that it is not associated with any terrorist group.

On January 28, 2014, the NCCM sent a notice of libel to the PMO. This is the first step in a defamation suit. On May 26, a lawyer acting on behalf of the NCCM announced that the organization had filed a lawsuit against the Prime Minister and his spokesman.

In recent articles, Point de Bascule and other commentators have pointed out at least three types of links between CAIR-CAN / NCCM and Hamas.

The first link derives from the endorsement given to Hamas in 2004 by Jamal Badawi and Wael Haddara while they were both leading CAIR-CAN and the Muslim Association of Canada (MAC). On March 22, 2004, the MAC issued a press release in which it openly supported Hamas. This endorsement of Hamas came more than one year after the Canadian government, Liberal back then, had added Hamas to a list of terrorist organizations. The listing is available on Public Safety Canada’s website. This endorsement of a listed terrorist organization by CAIR-CAN leader Wael Haddara contradicts another statement he made in 2012 when he assured Canadians that he would withdraw his support to an organization if “for any reason, [it] ceases to be considered in compliance with Canadian laws.” Clearly, that was not the case when he and another CAIR-CAN leader, Jamal Badawi, endorsed Hamas in 2004.

Over the years CAIR-CAN / NCCM and MAC have shared leaders and sponsored many activities together. They are among the most important components of the Muslim Brotherhood’s infrastructure in Canada.

The second link between CAIR-CAN / NCCM and Hamas was revealed by analyst Jonathan Halevi. In a March 2014 article, he reproduced CAIR-CAN’s October 7, 2000 Action Alert urging its supporters to fund the Jerusalem Fund for Human Services (JFHS), a Hamas front in Canada at the time. Like CAIR-CAN, JFHS changed its name and became the International Relief Fund for the Afflicted and Needy Canada (IRFAN-Canada). Under its two names, JFHS / IRFAN-Canada was well known for its documented ties with Hamas.

In April 2011, the Canada Revenue Agency (CRA) revoked IRFAN-Canada’s charity status after it concluded that, for the period 2005-2009 alone, it transferred $14.6 million to the terrorist organization Hamas (GMBDR – Toronto Star). On this occasion, the CRA produced a document “illustrat[ing] past and present linkages between JFHS, IRFAN-Canada and Hamas.”

There are also numerous documents published by Washington-based / Hamas-linked CAIR identifying CAIR-CAN as one of its branches.

When, in 2001, the Globe and Mail identified Sheema Khan as “chairwoman of the Canadian branch of the Washington-based Council on American-Islamic Relations,” it stated a fact that the CAIR-CAN / NCCM leadership would like us to forget. In a letter to the Winnipeg Free Press, CAIR-CAN / NCCM Executive Director Ihsaan Gardee reminded his readers that Sheema Khan has been a Globe and Mail columnist for many years.

When the CAIR-CAN’s name change was announced in July 2013, Sheema Khan, the organization’s founder, made a point of participating in the activities that were organized in Ottawa for the occasion. Her presence at the event illustrates the continuity that exists in CAIR-CAN / NCCM’s mission and activities beyond the name change. On July 6, 2013, Ihsaan Gardee and other NCCM leaders highlighted this continuity when they stressed that “we [NCCM] remain the same organization our constituents and partners have come to rely on.”

A Muslim lobby group accused a National Post reporter yesterday of setting out to cause trouble for people who sent letters to his newspaper criticizing his stories.

Sheema Khan, chairwoman of the Canadian branch of the Washington-based Council on American-Islamic Relations, said that Stewart Bell telephoned the employers of people who sent their letters to the Post via workplace e-mail.

In one call to an Ottawa company, “he asked the company if the letter was reflective of their own company policy, and, if not, whether the company had given this individual permission to use the company’s e-mail address to send the correspondence,” she said.

She declined to name the company or the letter writer. “Things were cleared up with his employer. They didn’t see any harm in sending a letter to the editor.”

Mr. Bell wrote three stories last month about Muslim-related Internet sites he said may have been used to recruit terrorists. He appeared to hang up yesterday when asked about the group’s complaint. Post editor-in-chief Kenneth Whyte did not repond [sic] to a request for comment. 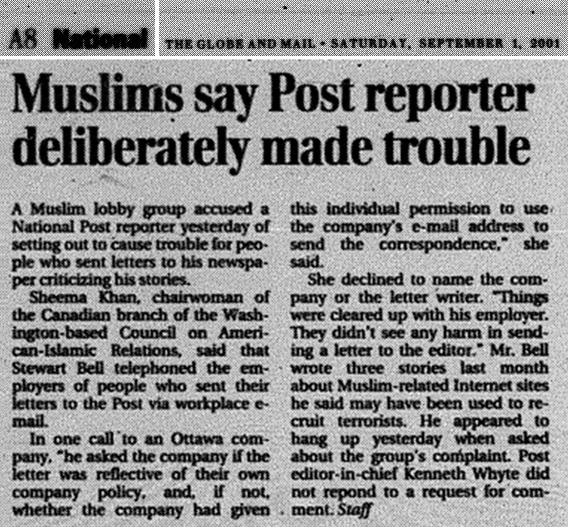 At least three types of links can be established between CAIR-CAN / NCCM and Hamas.

Hansard (September 20, 2005): CAIR-CAN Executive Director hails Jamal Badawi as “perhaps one of the best North American Islamic scholars, if not the premier.” (Badawi is a leader of numerous Muslim Brotherhood organizations in Canada and abroad and has been a CAIR-CAN director from 2001 to 2013.)