By Point de Bascule | on December 22, 2014 |
Enquête’s conclusion was contradicted by its own researcher on a Montreal private radio station
and by
facts that occurred shortly after the show was broadcast

Enquête concluded that it is all a myth. Enquête based its conclusion on the fact that, after visiting four mosques in the Montreal area with a recording device, its undercover collaborator did not hear any direct incitement to violence. Enquête witnessed an imam at the Assahaba mosque who discouraged his fellow congregants from befriending non-Muslims but this was not considered meaningful because there was no direct call for violence (Enquête / video 13:28). Enquête alluded to a call made in 2013 by Imam Ahmed Kandeel at the Al-Rawdah mosque in Montreal to jail or kill those who abandon Islam (Enquête / video 11:30). This call had been translated from Arabic by analyst Jonathan Halevi. When Enquête’s collaborator visited Kandeel’s Al-Jisr mosque in Laval (north of Montreal) in the summer 2014, he did not hear any call to violence, so Kandeel’s 2013 speech was discarded.

Enquête made no references to radical statements in Quebec-based mosques that were reported by other Radio-Canada programs in the past. The fact that, in recent years, many Islamic charities (some very active in Quebec) had their charitable status revoked by the Canada Revenue Agency for their funding of terrorist organizations was not mentioned. The fact that radical preachers who have endorsed armed jihad in US streets (Siraj Wahhaj), and suicide operations (Ekrima Sabri) or claimed that Jews make matzos (unleavened bread) with the blood of Christians (Salah Soltan) are invited to speak in Quebec by mainstream Muslim organizations was also considered a non-issue by Enquête. Chiheb Battikh, the director of the Education department of the main Muslim Brotherhood front in Canada was convicted for a kidnapping for ransom that took place in Montreal in December 2012. Once again, another non-issue for Enquête.

Islamists are also involved in non-violent influence operations with government agencies that aim at misrepresenting the nature of the Islamist threat, and how to tackle it. In recent months, Point de Bascule documented some out-of-Quebec cases:

After the brutal murder of Cpl. Nathan Cirillo on Parliament Hill last October by a jihadist, the first reaction of the Ottawa Police Service was to contact local Islamist organizations that transferred funds to Hamas fund collector in the past and to reassure them against any possible backlash;

After having contributed to radicalize young Muslims in Canada by distributing literature, such as the sharia manual Umdat al-Salik that advocates armed jihad, the use of deception, and much more, and by launching the RIS convention in Toronto with the sponsorship of the terror-funding / Saudi-based World Assembly of Muslim Youth (WAMY), Hussein Hamdani now advises Public Safety Canada on ‘de-radicalization’.

These facts and many more were brought up by Point de Bascule director, Marc Lebuis, when he met Johanne Faucher, Enquête’s main journalist, during the preparation of the November 27 episode, but almost none of this information was taken into consideration by Enquête. As if their conclusion had been drawn from the start and their decision taken to discard the facts that could challenge it.

In May 2014, Ms. Faucher contacted Marc Lebuis for the first time. She had been given a confidential access to Tom Quiggin’s report on the penetration of the Muslim Brotherhood in Canada and she wanted to know more about the Brotherhood’s activities in Quebec. Ms, Faucher and Marc Lebuis met on two occasions and he sent her emails to provide information about the Islamist infrastructure in Quebec. The filmed interview, whose excerpts were broadcast on November 27, occurred during a third meeting in September 2014.

After pushing aside all the inconvenient facts, Enquête finally concluded that those who warn about an Islamist threat in Quebec are “wading in intolerance,” and “fueling the fear of Muslims.” 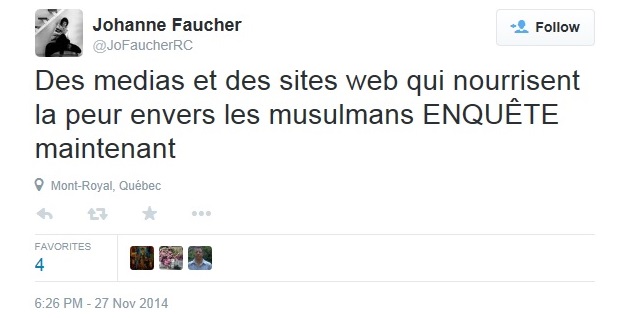 A few minutes before Radio-Canada broadcast its Enquête episode on the Islamist threat in Quebec (that it deemed non-existent), Johanne Faucher published a message on Twitter to advertise her TV show. She claimed that “Media and websites are fueling the fear of Muslims.”

Nadia Zouaoui was the main researcher for the November 27, 2014 Enquête episode. Her name appears just below Johanne Faucher in the list of collaborators. Before the episode was broadcast, Ms. Zouaoui was invited on two occasions by Radio9 Montreal to express her views about the radicalization in Montreal’s Muslim community.

On November 5, Nadia Zouaoui told radio host Caroline Proulx about the return of a “much more Salafist Islam” in Montreal’s mosques and she mentioned the fear of some Muslim parents to see their children being radicalized if they send them to weekend schools for learning Arabic.

Enquête’s researcher Nadia Zouaoui also told Radio9 that “[Muslim] groups meet behind closed doors,” and make “very dangerous speeches.” According to her, Islamist preachers “talk about politics,” and “promotes the victimization of the [Muslim] community” by propagating the idea that there is “a war against Muslims.” Nadia Zouaoui added that “Radicalization is very insidious. It’s much more than ‘We will become Salafist’, or ‘We will go wage jihad’. There is also this manipulation, this victimization that makes people sensitive to radicalization.”

At the end of October, at the same radio station, Zouaoui suggested that “we will have to watch [Montreal’s] mosques” because “there is a kind of radicalization, a return to a more Salafist, a more strict Islam, and it’s everywhere in the world. I believe that we must fight against that.”

Nadia Zouaoui’s assessment was carefully brushed aside from the November 27 episode of Enquête.

The transcript of Nadia Zouaoui’s comments on Radio9 about the radicalization occurring in Montreal’s mosques and the links to her full interviews are available on Point de Bascule.

November 27, 2014 – The Enquête public affairs show concluded that the Islamist threat in Quebec is a myth and that those warning about it are “Islamophobes” … “wading in intolerance.”

December 1, 2014 – Invited by the Senate Committee on National Security and Defence, Montreal police chief, Marc Parent, told senators that “the hunt for potential domestic terrorists takes a huge amount of time and effort [and that] Montreal police have launched 100 terror-related investigations in the past two months” (also WebArchive / Archive.Today).

Donations to Hamas: A very active file in Montreal

Some of IRFAN’s donors in Quebec

According to these reports, IRFAN-Canada kept on collecting money after its charitable status was revoked for funding terrorism in 2011. The Muslim Association of Canada (MAC), the main Muslim Brotherhood front in Canada, could have kept on transferring money to Hamas fund collector, IRFAN-Canada, after its charitable status was revoked. Hamas leaders have frequently advocated the Islamic conquest of the West in the past (2006 – 2008 – 2011 – 2012). In 2011, for example, Hamas leader Mahmoud Al-Zahhar said on TV that Western civilization “will not be able to withstand the great and glorious Islam.” Hamas is also engaged in the destruction of the state of Israel, as stated in its charter. On July 16, 2013, Hamas threatened to launch terrorist attacks in countries where Israel embassies are located.

December 2, 2014 – Jacques Frémont, President of the Quebec Human Rights Commission, announced his intention to ask for a modification of Quebec laws in order to facilitate complaints against websites and others deemed ‘anti-Muslims’ by his organization. According to Mr. Frémont, his proposal is based on recommendations by United Nations bodies. These U.N. recommendations were initiated by Muslim governments that belong to the Organization of Islamic Cooperation (OIC). They aim at forbidding the criticism of Islam, under the pretense of forbidding the defamation of religion. These proposals have consistently been rejected by Canada at the U.N. (p. 15). The Islamist offensive is not limited to violent actions. It also includes an ideological offensive aimed at silencing those who warn about the Islamists’ ambitions.

December 4, 2014 – The RCMP charged a Montreal-based 15-year-old youth with terrorism-related offences after he was arrested for allegedly committing a robbery “for the benefit, or at the direction, of a terrorist group.” Police said that the teenager was planning to join “terrorist activity abroad.” According to Reuters (also WebArchive / Archive.Today), Canadian officials are “tracking 93 people they consider high-risk travelers, who they fear could try to leave the country to join militant groups or mount attacks in Canada.”

December 4, 2014 – Release of a documentary highlighting the fact that Quebec’s authorities were unable to protect the Shafia women from an honour killing at the hands of their father/husband in 2009 in spite of being asked for help on many occasions by the victims. The inability of police to understand the ramifications of sharia principles justifying honour killings is a direct consequence of Islamists’ outreach programs with police.

December 7, 2014 – On his arrival at the Montreal airport from Tunisia, Nejib Belhaj-Chtioui was arrested (also WebArchive / Archive.Today) after being sought for more than a year on terrorism-related charges.