“Bridge building” with Islamists – Rundown of the Muslim organizations met by the Ottawa Police Service and the RCMP in the hours following the murder of Cpl. Nathan Cirillo by a jihadist on Parliament Hill 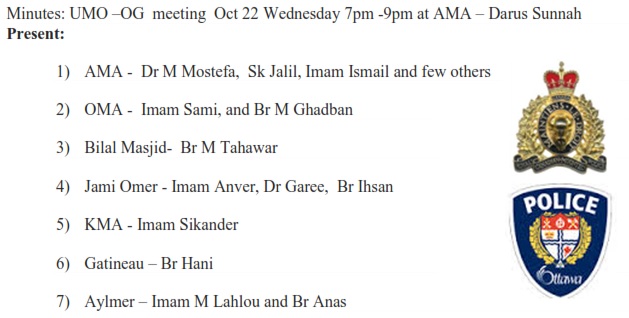 The minutes of the October 22 meeting between the RCMP, the Ottawa Police Service and the leaders of 13 Ottawa-based Muslim organizations are available on the South Nepean Muslim Community’s website (also WebArchive and Archive.Today). The minutes are also reproduced at the bottom of this article.

Special thanks to DG for informing Point de Bascule about the meeting between the RCMP, the OPS, and the leaders of 13 Ottawa-based Muslim organizations that took place on October 22, 2014, just a few hours after the brutal killing of Cpl. Nathan Cirillo by a jihadist on Parliament Hill.

On October 22, shortly after the brutal killing of Cpl. Nathan Cirillo by a jihadist on Parliament Hill, Ottawa Police Chief Bordeleau sent a message to various Ottawa-based Islamist leaders to reassure them and invite them to contact the Ottawa Police Service if they fear “backlash.” Point de Bascule dedicated an article to examine the threat posed by the Islamists with whom Police Chief Bordeleau is “building bridges.” The Ottawa Police did not stop there. The day of the terrorist attack in Ottawa, it also sent a delegation of officers to meet with the leaders of 13 Muslim organizations operating in the city. The RCMP was also represented at the meeting

Most of these organizations have transferred money to sponsors of radicalism and many of them to a sponsor of terrorism in the past.

The minutes of the meeting mention that Sk Jalil (likely Sheikh Jalil Marhnouj, vice president of the Assunnah Muslims Association) “br[ought] the RCMP and [Ottawa] Police officers and guid[ed] them to speak and depart in a timely fashion” that evening.

Islamists operating in Ottawa feel so confident that they do not even hide the fact that they belong to the Hamas’ support network. The South Nepean Muslim Community (SNMC), for example, the organization that invited most participants at the meeting according to the minutes, still openly endorses Hamas fund collector, IRFAN-Canada, on its website (also Archive.Today). An image of the page has been reproduced towards the end of this article.

In 2002, the Canadian government, Liberal back then, added Hamas to a list of terrorist organizations. In April 2011, IRFAN’s charitable status was revoked by the Canada Revenue Agency after it concluded that, for the 2005-2009 period alone, it transferred $14.6 million to Hamas. In 2014, the Government of Canada listed IRFAN as a terrorist organization.

Aside from the National Council of Canadian Muslims (former CAIR-CAN), all Islamist associations represented at the October 22 meeting with the OPS and the RCMP belong to the United Muslim Organizations of Ottawa Gatineau (UMO-OG), an umbrella organization composed of the main Muslim Brotherhood-linked entities in Ottawa.

Most of the 13 organizations represented at the meeting with the OPS and the RCMP have a charitable status. In what follows, we looked at the money transfers they declared to the Canada Revenue Agency and we highlighted those that went to three organizations funding the radicalization of Muslims in Canada: IRFAN-Canada, Human Concern International (HCI) and Islamic Relief.

We present a short profile of IRFAN, HCI, and Islamic Relief before listing the money transfers.

As long as Canadian authorities, and police organizations in particular, will be giving credibility to those who fund the radicalization of Muslims in Canada, it will be impossible to contain the threat that we are facing.

In April 2011, IRFAN’s charitable status was revoked by the Canada Revenue Agency after it concluded that, for the 2005-2009 period alone, it transferred $14.6 million to Hamas. In 2014, the Government of Canada listed IRFAN as a terrorist organization.

Hamas leaders have frequently advocated the Islamic conquest of the West in the past (2006 – 2008 – 2011 – 2012). In 2011, for example, Hamas leader Mahmoud Al-Zahhar said on TV that Western civilization “will not be able to withstand the great and glorious Islam.”

On July 16, 2013, Hamas threatened to launch terrorist attacks in countries where Israel embassies are located. These threats are identical to those that incited Martin Ahmad Rouleau and Michael Zehaf-Bibeau to kill Warrant Officer Patrice Vincent in Saint-Jean and Corporal Nathan Cirillo in Ottawa.

As early as 2004, then Opposition MP Stockwell Day and others warned about the threat posed by Hamas fund collector IRFAN. In 2007, a U.S. tribunal stated that IRFAN was a front for Hamas in Canada (subsection VIII).

When IRFAN organized a fundraising event in Montreal in 2009, it invited Ekrima Sabri, the former Mufti of Jerusalem who has expressed his support for suicide operations, and declared in 2000: “The younger the martyr – the greater and the more I respect him.”

Ahmed Said Khadr led HCI’s branch in Pakistan in the early 2000s and was killed in 2003 while fighting for al-Qaeda. Today, Khadr is being praised by al-Qaeda as a martyr. HCI also transferred $29,700 to the now-declared terrorist organization IRFAN in 2004. HCI regularly sponsors radical activities in Canada, including the visit of the Jamaat-e-Islami (JEI) leader Qazi Hussain Ahmad in 2008. That year, Canadian Immigration authorities refused to grant Ahmad a visa.

JEI’s main message has been summarized by its founder Syed Maududi in his book Jihad in Islam:

“Islam wishes to destroy all States and Governments anywhere on the face of the earth which are opposed to the ideology and programme of Islam regardless of the country or the Nation that rules it … Islam requires the earth – not just a portion – but the whole planet.”

Islamic Relief is the most important Muslim charity in the world. On its British, Irish and Canadian websites, Islamic Relief lists eight categories of beneficiaries for the zakat (charity) that it collects. It openly mentions funding Muslims involved in jihad (“Those struggling in the path of Allah”). Besides jihadists, this charity mostly funds groups of needy people and the zakat collectors themselves.

The eight categories of zakat beneficiaries listed by Islamic Relief match those mentioned in the manual of sharia Umdat al-Salik (Reliance of the Traveller). The English translation of this manual is endorsed by the International Institute of Islamic Thought, the main Muslim Brotherhood think-tank in North America and by academics close to the Muslim Brotherhood, such as Tariq Ramadan, and Mohammad Fadel.

The Islamist Hussein Hamdani who is currently advising Public Safety Canada on security matters was distributing this manual of sharia through his organization Ihya Productions in the early 2000s. Ihya Productions’ mission was to provide “quality Islamic educational resources” in order to stimulate a “revival of the Ummah” (Muslim community), another way of saying that they provided key Islamic texts to radicalize young Muslims and give them theoretical ammunition to better understand the project of Islamic conquest.

The section h8.17 of the Umdat al-Salik (Reliance of the Traveler) sharia manual specifies that “those struggling in the path of Allah” who may receive Muslim charity are those who are “engaged in Islamic military operations for whom no salary has been allotted in the army roster (O: but who are volunteers for jihad without remuneration). They are given enough to suffice them for the operation, even if affluent; of weapons, mounts, clothing, and expenses (O: for the duration of the journey, round trip, and the time they spend there, even if prolonged. Though nothing has been mentioned here of the expense involved in supporting such people’s families during this period, it seems clear that they should also be given it).”

In November 2012, the Swiss bank UBS closed UK-based Islamic Relief’s account and blocked its donations for fear of being involved in the financing of terrorist activities. In June 2014, Israel banned Islamic Relief from operating in the West Bank due to its ties with Hamas.

In recent years, Islamic Relief has been involved in the radicalization of Muslims in Canada by sponsoring numerous conferences, such as Reviving the Islamic Spirit in Toronto, that featured Siraj Wahhaj, a promoter of armed jihad in U.S. streets and Jamal Badawi, who openly encourages sedition by Muslim judges and other civil servants in Canada.

In June 2012, Islamic Relief was represented in the delegation led by Hussein Hamdani that met with then Minister of Public Safety Vic Toews. The main purpose of the delegation was to convince the Minister to stop referring to the Islamic ideology that motivates jihadists in Canada and abroad.

Money transfers to three Muslim Brotherhood-linked entities involved in the radicalization of Muslims by the organizations met by the OPS and the RCMP the day Cpl. Cirillo was killed by a jihadist on Parliament Hill

1. Assunnah Muslims Association (identified as AMA on the minutes)

Islamic Society of Cumberland (identified as Bilal Masjid on the minutes)

Ottawa Muslim Association (identified as OMA on the minutes)

Note: In 2013, this organization transferred money to CAIR-Canada (now called the National Council of Canadian Muslims / NCCM). CAIR-Canada / NCCM is not eligible to receive money from a registered charity because it is not a “qualified donee,” as defined by the Income Tax Act.

Note: In 2007 and 2008, this organization claimed many money transfers without identifying all the donees. Therefore, more money could have been transferred to IRFAN and HCI than what is specified above.

Kanata Muslim Association (identified as KMA on the minutes)

Taqwa Musalla (identified as Taqwa on the minutes)

This organization does not appear to have a charitable status with the Canada Revenue Agency.

Islamic Society of Gloucester (identified as Gloucester on the minutes)

No money transfers reported to IRFAN-Canada, HCI and Islamic Relief between 2000 and 2013

Islam Care Centre (identified as Islam Care on the minutes)

Muslim Association of Canada (identified as MAC on the minutes)

South Nepean Muslim Community (identified as SNMC on the minutes)

National Council of Canadian Muslims (identified as NCCM on the minutes)

This organization does not appear to have a charitable status with the Canada Revenue Agency.

The South Nepean Muslim Community, that invited the participants to the meeting with the OPS and the RCMP, openly endorses the terrorist organization IRFAN-Canada on its website 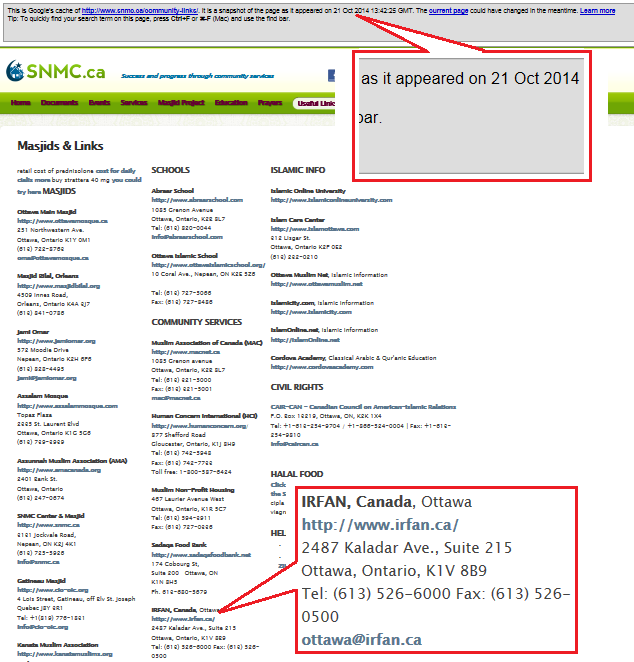 Minutes of the October 22, 2014 meeting with Ottawa Police Service and RCMP representatives and leaders of 13 Muslim organizations in Ottawa