On October 8th, 2014, the International Cultural Center is organizing another of these “outreach” activities in Montgomery Village (Maryland) between known Islamists and police authorities under the theme Understanding the ISIS Threat to the Homeland. In their presentation of the panel, the organizers announce that “[their] international expert panel will discuss the recruiting tactics of ISIS and other terrorist groups and explore innovative strategies for empowering the community to intervene.”

In spite of the fact that both Rabia Chaudry and Hussein Hamdani are Islamists linked with the North American Hamas support infrastructure, they are scheduled to meet with Montgomery County Police Chief Thomas Manger to present their “solutions” to the terrorist recruitment in the U.S.

In 2007, Rabia Chaudry was identified as the Media Relations Director of the Council on American Islamic Relations (CAIR) in Connecticut. In 2012, she publicly defended CAIR almost three years after U.S. Judge Jorge Solis stated that: “The government has produced ample evidence to establish the associations of CAIR, ISNA […] with Hamas” (Section IV / United States of America v. Holy Land Foundation for Relief and Development) and ten years after another judge concluded that the Islamic Association for Palestine, where CAIR founders came from, “has acted in support of Hamas” (Holy Land Foundation for Relief and Development v. Ashcroft).

Given the fact that the FBI severed its ties with CAIR in 2009 “amid mounting evidence that it has links to a support network for Hamas,” it is unacceptable that another police service in the U.S. associates with CAIR apologists, such as Rabia Chaudry, and leads the public into believing that those who are linked with the North American Hamas’s support network are allies against the terrorist threat in the U.S. 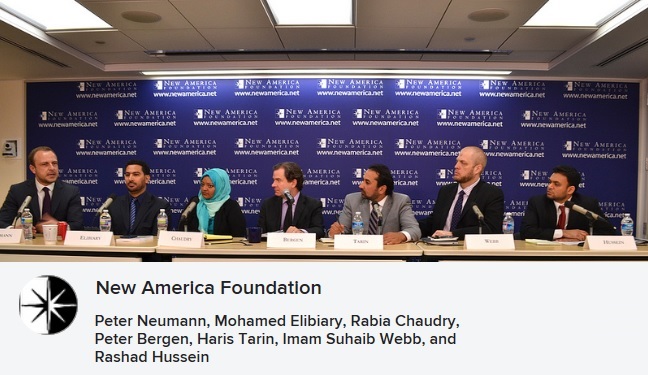 *** Rabia Chaudry with four activists (also MPAC) whose association with the Muslim Brotherhood has made the headlines in recent years. The Investigative Project on Terrorism has published profiles of Mohamed Elibiary and Haris Tarin. According to the Rose El-Youssef Egyptian magazine, Rashad Hussein is one of six Muslim Brotherhood activists having infiltrated the Obama administration. Breitbart recently published a piece about Suhaib Webb’s ties to radicalism. On September 27, Webb apologized to ISIS for having criticized the terrorist organization in the past. ***

Here is a summary of Hussein Hamdani’s links with three organizations whose charitable status was revoked by the Canada Revenue Agency for their funding of terrorism and a fourth one that publicly endorsed Hamas after it was listed a terrorist organization by the government of Canada.

World Assembly of Muslim Youth (WAMY) – In January 2003, Hussein Hamdani’s organization, the Ihya Foundation, launched the Reviving the Islamic Spirit conventions in Toronto with the sponsorship of the Saudi World Assembly of Muslim Youth, an organization that has been fingered for years for financing terrorism. In 2012, when the Canada Revenue Agency revoked WAMY’s charitable status, it highlighted that its Canadian branch funded Al Qaeda in 2001, two years before it sponsored the launch of the RIS conventions.

IRFAN-Canada – In spite of being a security advisor to Public Safety Canada, Hussein Hamdani maintained his leadership positions with two organizations contributing to IRFAN-Canada, Hamas’s main fund collector in the country. There were many warnings that IRFAN-Canada was contributing to Hamas. Among them, one came from Canadian Opposition MP Stockwell Day in 2004, and another one from the United States. In 2007, IRFAN was identified as a part of Hamas’s global financing mechanism in the Holy Land Foundation trial in the U.S (subsection VIII). In April 2011, the Canada Revenue Agency revoked IRFAN’s charitable status after having concluded that, for the 2005-2009 period alone, it transferred $14.6 million to the terrorist organization Hamas. In April 2014, IRFAN was added to Canada’s list of outlawed terrorist groups.

Stockwell Day’s public warnings about IRFAN should have been enough to convince Hamdani to keep his distance from entities funding IRFAN. Rather than doing so, Hussein Hamdani maintained his leadership positions in at least two organizations that transferred money to Hamas’s fund collector in Canada. On his official profile published when he joined the Cross-Cultural Roundtable on Security in 2005 and on his current one (September 2014) posted on the Public Safety Canada’s website, Hussein Hamdani is presented as the Halton Islamic Association’s Public Relations Officer and as a Director on the Board of the Hamdani Foundation in St. Catharines.

Both organizations have contributed to Hamas’s fund collector, IRFAN, while Hamdani was associated with them.

Here is a list of money transfers to IRFAN by organizations in which Hussein Hamdani is involved:

Islamic Society of North America (ISNA) – On October 6, 2013, Siraj Wahhaj was invited to speak at the ISNA mosque in Mississauga (Ontario, Canada) by Hussein Hamdani’s North American Spiritual Revival, in spite of the Imam’s endorsement of armed jihad in U.S streets, his defense of a cop-killer, and many other radical positions. Two weeks before, a substructure of the organization hosting the event (ISNA) had its charitable status revoked after the Canada Revenue Agency determined that the ISNA Development Foundation was providing tax receipts to a non-charitable entity collecting money for an organization waging armed jihad in India.

Muslim Association of Canada (MAC) – Hussein Hamdani has maintained his collaboration with the MAC, in spite of its open support for Hamas in 2004, more than one year after it was added to a list of outlawed terrorist organizations by Public Safety Canada, the very department advised by Hamdani on security matters. From 2001 to 2010, the MAC transferred $296,514 to Hamas’s fund collector, IRFAN-Canada.

On its own website, the MAC has stated that its “modern roots can be traced to the Islamic revival of the early twentieth century, culminating in the movement of the Muslim Brotherhood … MAC adopts and strives to implement Islam … as understood in its contemporary context by the late Imam, Hassan Albanna [1906-1949], the founder of the Muslim Brotherhood.”

Hassan Al-Banna referred to Hitler as an inspiration for Muslims looking for “success and fortune,” and he stated that “It is obligatory on us [Muslims] to begin fighting against non-Muslims even if they do not fight against us.”

On March 21, 2014, the head of MAC Education Department, Chiheb Battikh, was sentenced to six years in jail for a kidnapping for ransom in Montreal.

In August 2014, Jonathan Halevi translated a sermon given by Imam Ahmed Abdul Kader Qandeel (aka Ahmed Kandil) at the MAC main mosque in Montreal in which he said that apostates have to be executed or jailed to death by the authorities of an Islamic State.

This is precisely the rule being advocated and applied by the Islamic State (ISIS) today. How can those supporting the Muslim Association of Canada be of any help when it comes to challenging ISIS for applying the very rules advocated by their own religious leaders?

The MAC has also invited a long list of Muslim scholars to radicalize young Muslims in Canada: Ekrima Sabri, a promoter of suicide operations (“The younger the martyr – the greater and the more I respect him”), Salah Sultan who said on Al-Aqsa TV that Jews use the blood of Christians whom they slaughter to make matzos (unleavened bread), Tariq Ramadan, who openly called his Muslim supporters in Dallas in 2011 to colonize the United States “with our understanding of Islam, with our principles,” etc.

Rather than warning Public Safety Canada about the radicalization offensive waged by the MAC in the Muslim community, Hussein Hamdani endorsed it and contributed to it:

In 2005, the Hamdani family foundation contributed $11,000 to the Muslim Association of Canada (MAC). That year, Hussein Hamdani was identified as a director of the foundation on his profile published by the Government of Canada;

In 2009, under the chairmanship of Hussein Hamdani, the publicly funded Settlement and Integration Services Organization (SISO) joined with pro-Hamas MAC and other organizations to sponsor a conference in Hamilton;

In 2010, under the chairmanship of Hussein Hamdani, SISO replaced resigning Executive Director Morteza Jafarpour by Yaser Haddara, a Director of the MAC that year according to the Canada Revenue Agency;

In May 2011, Hussein Hamdani supported and announced an activity organized by the MAC whose proceeds went towards Cordoba House in Hamilton, a MAC substructure. 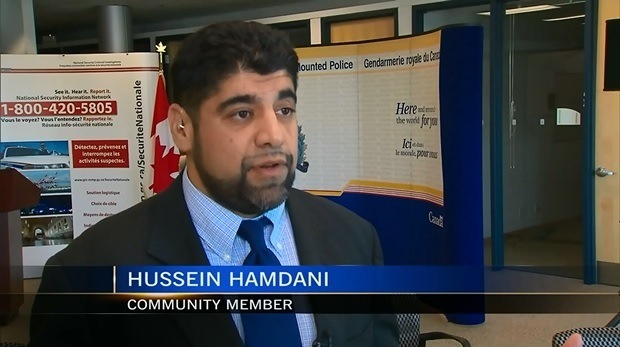 Point de Bascule (December 12, 2013): Reviving the Islamic Spirit – In 2003, the launch of the RIS conventions in Toronto was sponsored by an organization tied to Al-Qaida (Hussein Hamdani was director of Ihya Foundation, the organizer of the event.) 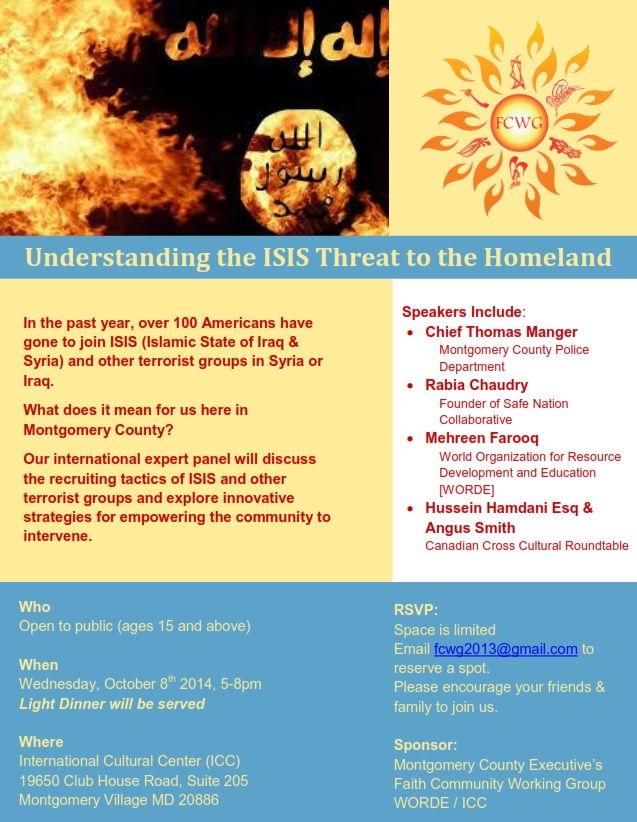