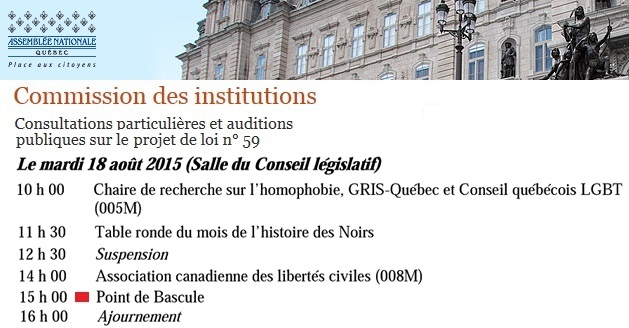 Transcript of the presentation in the Hansard

The original presentation was made in French.

According to our research, Canada is not only facing a terrorist threat, but also much more insidious, and non-violent efforts that aim at misleading government agencies, police services, the media, etc., on radical Islam’s ambitions of conquest in Canada and in the West in general.

There are many formulations of this plan of conquest.

In the early 2000s, Jamal Badawi, one of the main leaders of the Muslim Brotherhood infrastructure in Canada, said that, at the present time, Muslims should accept to become judges and civil servants in Canada even though the country was not ruled by sharia, the Islamic law.

He declared that these judges and these civil servants should take advantage of their positions of influence to stop applying current legal provisions that are not compatible with sharia.

In 2004, in an interview with Egypt Today, Tariq Ramadan went in the same direction when he encouraged Islamists operating in Canada to use the Canadian legal framework, which he referred to as “one of the most open in the world,” to subtly and gradually introduce rules of sharia in Canada.

At the time, Tariq Ramadan strongly urged his supporters NOT to openly mention their commitment to sharia: “The term shariah in itself is laden with negative connotations in the Western mind,” Ramadan said. “There is no need to stress that. […] For the time being this is not how we want to be perceived,” he added.

This statement to the effect that Islamist lobbies supported from abroad want to implement sharia law in Canada is not new. It was part of the presentation of the motion against Islamic tribunals in Ontario that was adopted by the Quebec National Assembly on May 26, 2005.

Today in 2015, those who want to implement sharia in Canada have put on their agenda the adoption of measures banning references to Islamic concepts when describing the threat facing Canada.

This is what led us to ask for a hearing by this Commission studying Bill 59. If Bill 59 is adopted, it will make it very risky to talk about the ambitions of Islamists to implement sharia in Canada. In 2005, if the provisions of Bill 59 had been in operation, those who were publicly criticizing the introduction of Islamic tribunals in Ontario would have been at risk of being sued for ‘hate speech.’

JACQUES FRÉMONT: SUING THOSE WHO WRITE AGAINST ISLAM ON THE INTERNET

On December 2, 2014, when the Quebec Human Rights Commission President, Jacques Frémont, explained on Radio-Canada the recommendations of his organization that led to what is now Bill 59, he pointed out that he intended to use the new powers he was asking for to initiate lawsuits against “people who would write against […] the Islamic religion […] on a website or on a Facebook page.”

Point de Bascule (December 19, 2014): Quebec Human Rights Commission President Jacques Frémont confirms to Radio-Canada that he intends on targeting those who criticize ideas, those who criticize the Islamic religion in particular [Article in French]

2. #BILL59 IS INSPIRED BY UN AND OIC RESOLUTIONS AGAINST THE CRITICISM OF ISLAM

A second point that is very troubling in regard to the QHRC’s project, now part of Bill 59, is that the QHRC president justifies it by invoking United Nations resolutions supporting the same goal.

What Mr. Frémont did not tell Radio-Canada when he alluded to these UN resolutions on December 2, 2014 is that they originally came from the Organization of Islamic Cooperation, the OIC, that claims equivalence between hate speech, blasphemy, criticism of Islam and defamation of religions.

RAIF BADAWI WAS WHIPPED FOR CRITICIZING CERTAIN ASPECTS OF ISLAM

Saudi Arabia, one of the OIC’s most important members, invoked the same kind of provisions to convict Raif Badawi to 1,000 lashes for having criticized certain aspects of Islam on his blog. Quebecers strongly expressed their support for Raif Badawi in recent weeks.

DESCRIPTION OF THE OIC

The OIC is an association of 56 Muslim countries (with the Palestinian Authority). It constitutes the most important bloc of countries taking part in UN votes. In 1990, displeased with the Universal Declaration of Human Rights (that Saudi Arabia did not approve in 1948), the OIC adopted its own Cairo Declaration on Human Rights in Islam that affirms the primacy of sharia and that is incompatible with freedom of expression.

OIC members regularly present resolutions at the UN and in other international forums to criminalize the criticism of Islam. In 1999, Pakistan presented the first resolution to this effect. The first version of this resolution specifically asked for the condemnation of ‘defamation of Islam.’ Subsequent versions referred more generally to ‘defamation of religions.’

At the United Nations, under both the Liberal and Conservative governments, Canada has consistently voted against the censorship proposals brought forward by the OIC since 1999. These proposals are behind the UN resolutions referred to by Mr. Frémont to support the recommendations that have been included in Bill 59.

3. TWO ACTIVITIES THAT ARE INCOMPATIBLE IN THE QHRC’S MISSION

A third reason for opposing Bill 59 is that the Quebec Human Rights Commission that would apply the provisions regarding ‘hate speech’ has a double mandate whose two facets are incompatible in a society based on the rule of law. In a speech that he gave at the Université de Montréal on March 25, 2015, QHRC President, Mr. Frémont, described the QHRC’s activist role as follows: he stated that the QHRC’s mandate is “seeking changes in people’s attitude” (“faire changer les mentalités” in French), “provoking a social change” (“induire le changement social” in French), and “making the law” by choosing to prosecute difficult cases (“faire le droit” in French). When Mr. Frémont explained what he meant by “making the law,” he indicated that the QHRC should initiate lawsuits without the absolute certainty to win in court and that the QHRC should “take risks” to see how far judges are willing to go to accommodate the changes that the QHRC wants to bring in society.

Point de Bascule (June 30, 2015): March 25, 2015 – Excerpts of a speech given by Jacques Frémont on the role of the Quebec Human Rights Commission [Article in French]

ANTI-SHARIA MUSLIMS DENOUNCE THE USE OF THE TERM ‘ISLAMOPHOBIA’

Salman Rushdie, in an interview to the French magazine L’Express, and several groups of Canadian anti-sharia Muslims, in a full page they published in the National Post on July 30, 2015, pointed out that we must “stop referring to this taboo of so-called islamophobia.” Rushdie asked: “Why can’t we debate about Islam? It is possible to respect individuals, to protect them from intolerance while demonstrating skepticism towards their ideas and even by criticizing them vigorously.”

Muslim Facing Tomorrow (National Post – July 30, 2015) : #BILL59 Debate – A coalition of Muslim organizations publishes a full page in the National Post to denounce the unfettered use of accusations of Islamophobia to inhibit free speech and silence the discussion on Islamist extremism in Canada

4. TRUTH AND PUBLIC INTEREST ARE NOT DEFENSES AGAINST CHARGES OF ‘HATE SPEECH’

My last criticism towards ‘hate speech’ legal suits is that, contrary to libel suits, they are much vaguer, much more arbitrary and the defenses almost nonexistent. The notion of ‘hate speech’ is not defined in Bill 59, but, even it was, it would be problematic because this notion of ‘hate speech’ is based solely on what the persons targeted by litigious statements have been made to feel or even what they COULD feel, given that Article 6 of Bill 59 would enable the QHRC to initiate lawsuits without any complaints from the public. Contrary to libel suits, the public interest of raising an issue that could be perceived as offensive is not taken into account with ‘hate speech.’

In a recent Point de Bascule article, we have highlighted that the leader of an organization that has been invited at Bill 59 public hearings had justified in 2003 in La Presse that Salman Rushdie be killed ‘for having offended the Prophet.’ If we were being sued for defamation for bringing up this fact, we could stress that it is of public interest to raise this issue since this organization represents 70 Islamic institutions in Montreal. In a ‘hate speech’ lawsuit, this defense would be worthless since the focus is exclusively on the feeling of the person that was targeted by the litigious statements.

SUPPORTING RAIF BADAWI AGAINST CENSORSHIP WHILE APPLYING THE SAME KIND OF CENSORSHIP IN QUEBEC?

In closing, I would like to highlight that it would be a tremendous step backwards if Quebec, which probably was the first North American jurisdiction to adopt an anti-sharia resolution in 2005, and which supported Raif Badawi against censorship and persecution by Saudi Arabia, were to give in to pressure and restrict Quebecers’ freedom of expression, notably when they want to describe and resist the Islamist threat.

A CALL NOT TO ADOPT #BILL59

For all these reasons, I enjoin you not to adopt Bill 59.
I thank you for your attention.