Video of the roundtable https://www.youtube.com/watch?v=3P3CeT1-9WA&feature=youtu.be

On May 25, 2016, Haroun Bouazzi of AMAL-Québec and representatives of two anti-Islamophobia lobbies in France and Belgium spoke at a roundtable entitled Beyond the Law, which political mobilizations? that ended a full-day event in Paris dedicated to Islamophobia.

From 2004 until May 2014 / Archive.Today, the Association against Islamophobia in France (French: Collectif contre l’islamophobie en France / CCIF), very close to Tariq Ramadan and the oldest and the most influential of the three lobbies, used a logo with the two Cs of its acronym put back to back to form an S, so it can read ‘sif’ which means ‘sword’ in Arabic, the sword that can be found on the Saudi flag, for example, which represents a justification for the use of violence.

After being sued for ‘Islamophobia’ by the CCIF in 2013, Figaro’s columnist, Ivan Rioufol, referred to the CCIF logo in his defense to demonstrate the Islamist and supremacist agenda of this organization. In October 2015, Rioufol won his case / Archive.Today after the CCIF’s complaint was dismissed by a Paris tribunal.

WARNING: An organizer and a participant at the roundtable had names that were almost identical: Marwan Mohammed, a sociologist at the CNRS, and Marwan Muhammad, the CCIF’s Executive-Director. There is no reference to the sociologist in the English version of this text but those who would consult the more elaborate French version of this text or other Islamophobia-related material published in France should keep this in mind.

On May 25, 2016, AMAL-Québec co-president, Haroun Bouazzi, spoke at a full-day event in Paris dedicated to Islamophobia. The event was attended by other anti-Islamophobia activists from France and Belgium and by academics and lawyers. Valérie Amiraux, a professor at the Université de Montréal and Coline Bellefleur, the Quebec spokesperson for the Canadian Muslim Lawyers Association, were also in Paris to take part in other roundtables that day.

The schedule of the event and the list of participants are available on the Association against Islamophobia in France / CCIF’s website.

In one of his presentations, Haroun Bouazzi described the situation of Muslims living in Quebec as being “catastrophic.” (Video 0:07:25)

As noted in a recent report broadcast by the Belgian public TV network RTBF, the concept of Islamophobia is being used by the Muslim Brotherhood and organizations close to it, such as the Belgian CCIB and the French CCIF, to prevent any criticism of Islam. In this TV report, sociologist Gilles Kepel highlighted that “Islamophobia is a weapon being used against non-Muslims who criticize Islam. It is also being used against those Muslims who have a wrong interpretation of Islam, in other words an interpretation that they disagree with.”

After the terrorist attacks in St-Jean (Quebec) and Ottawa in the fall of 2014, the Couillard government invited Haroun Bouazzi and other leaders of the Muslim community for consultations aimed at preventing radicalization within the Muslim community. During his presentation in Paris, Haroun Bouazzi alluded to his role alongside the Quebec government (Video 0:19:37).

Bouazzi highlighted that the kind of dialogue he is having with the Couillard government, and with his Minister Kathleen Weil in particular, can only be fruitful if other activists, whom he described as “much more rigid” (Video 0:13:10) are involved, at the same time, in a strategy that he described as “revolutionary” and “far-left”. Without specifically naming his approach but by the description he provided, Haroun Bouazzi was referring to a Good cop Bad cop routine, Bouazzi presenting himself as the Good cop in the circumstances.

Haroun Bouazzi did not specify the kind of “revolutionary” actions he had in mind and that would, in his mind, shake the Couillard government enough to force it to bow down to the requests supported by the Bad cops AND the Good cops. Occupying ministers’ offices? Organizing ‘spontaneous’ riots inspired by those in Montréal-Nord / Archive.Today? Repeating the “carrés rouges” episode? Burning hundreds of cars to emulate the French model?

The “carrés rouges” episode refers to a student strike or boycott that occurred in the spring of 2012 in Quebec. Strikers and their supporters (including the leader of the Opposition at the Quebec National Assembly) wore pieces of red cloth (“carrés rouges”) that became the symbol of their opposition to the provincial government. Groups of students, who were displeased by the announcement made by the Charest Liberal government to increase the tuition fees (the lowest in Canada), organized countless demonstrations, blocked the streets and prevented other students from attending their classes. At the time, Islamists at the University of Ottawa tried to replicate the movement.

In the least explosive scenario, one can easily imagine that after “much more rigid” Bad cops had illegally (that goes without saying) occupied a minister’s office, for example, a delegation of “moderate” Good cops led by Haroun Bouazzi would offer its services to the government as a mediator to convince the “rigid” ones to leave. In exchange, the government would offer Bouazzi what the “rigid” activists and the “moderate” activists want.

This Good cop Bad cop routine, used with so much success by Al-Qaida (the “rigid” ones) and the Muslim Brotherhood (considered “moderate” by so many Western governments) has been explained by specialist Raymond Ibrahim:

At this May 25 meeting in Paris, the Association against Islamophobia in France’s Executive Director, Marwan Muhammad, agreed to resort to “revolutionary” tactics to reach his political goals (Video 1:29:03). Besides, he compared the reformist approach to a contact sport, to “a judo competition” (sic).

The first Point de Bascule article announcing the May 25 meeting in Paris had highlighted the closeness between Marwan Muhammad’s CCIF and Tariq Ramadan.

In 2012, two years before the January 2015 terrorist attack against Charlie Hebdo, Tariq Ramadan’s organization, Muslim Presence, justified the use of violence against the satirical magazine. When Point de Bascule broke the story shortly after the terrorist attack in 2015, the organization Muslim Presence withdrew the article from its website without providing the slightest explanation. Another compromising document had just been dropped in the “memory hole.”

Another article recently published by Point de Bascule highlighted the collaboration of AMAL-Québec and Haroun Bouazzi with the National Council of Canadian Muslims (NCCM, formerly CAIR-Canada). The NCCM / CAIR-Canada was established as a branch of the Washington-based Council on American-Islamic Relations of which Judge Solis recalled, in a 2009 decision, its closeness with the terrorist group Hamas (see page 15 of the decision).

FEMYSO is the youth wing of the Federation of Islamic Organizations in Europe, an umbrella entity that connects the various Muslim Brotherhood national branches in Europe. 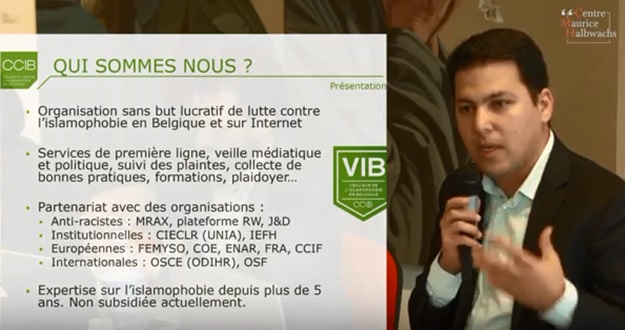 In his speech, the CCIB representative stated that criticism of Islam “is not problematic by itself and it must be allowed in a democratic society that accepts a certain tension between the freedom of expression, the criticism of Islam… as long as we do not touch a limit […] that reaches and goes beyond what is called ‘hate speech’.” (Video 0:27:00)

However, a recent TV report broadcast by the Belgian public TV network RTBF highlighted that the CCIB published a text on Facebook describing books that were denouncing terrorism as contributing to Islamophobia. (Video RTBF 36:04) If even the criticism of terrorism is unacceptable and ‘Islamopohobic’ in the CCIB’s eyes, then essentially speaking there is nothing left with a remote link to Islam that can be criticized without deserving the qualifiers “hateful” or “Islamophobic.”

Hajib Hajjaji accused the Belgian political class of trying to “disqualify” and “demonize” the CCIB by reminding of its links with the Muslim Brotherhood infrastructure in Europe. (Video 1:22:40)

During his intervention, Marwan Muhammad (CCIF) mentioned a “financial leap” that was experienced by his organization in the last three years and that enabled it to go from three full time employees to ten.

According to Muhammad, “the expenses for the day-to-day CCIF operations are paid strictly out of revenues coming from members’ donations.” However, he admits that the CCIF is receiving funding from government entities, such as the European Commission of Human Rights, and from charitable foundations that help put in place “special” projects. (Video 1:49:48)

In 2013, the Libération daily newspaper described George Soros’ Open Society as being one of the CCIF’s “important funders” / Archive.Today.

In her book L’Islam, épreuve française (quoted by Ivan Rioufol from Le Figaro / Archive.Today), Elisabeth Schemla reproduced a statement made by Marwan Muhammad at the Orly mosque in August 2011 to the effect that French citizens do not have the right to oppose the transformation of France into a Muslim country:

Since French citizens “do not have the right” to oppose the transformation of their country into an Islamic republic, according to Marwan Muhammad, here is another motive for which they will, assuredly, be accused of Islamophobia.

NOTE: The French version of this text has also a second part with a transcript of long excerpts from all three speakers’ speeches.

Right image, Haroun Bouazzi is in the back between Minister Kathleen Weil and Quebec Premier Couillard in a November 2014 meeting whose declared goal was preventing radicalization. He is accompanied by Lamine Foura (right) and Monsef Derraji (at the back in the middle) from the Congrès maghrébin au Québec (CMQ), Islamist Samira Laouni (left) and Imam Omar Kone.

Left image, Mohamed El Khayat and Abdelaziz Younsi, two members of the CMQ Board of Governors, the organization invited to take part in a counter-radicalization program by the Premier, are currently being tried on a $400,000 fraud charge against the Quebec government and on other charges. Abdelaziz Younsi was the IT director of the province’s Ministry of Public Safety.