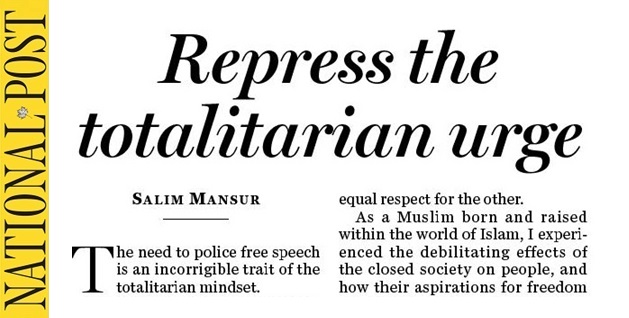 Author: Salim Mansur (He is a professor at Western University in London, Ontario.)
Source: National Post, September 1, 2015, p. A13

The need to police free speech is an incorrigible trait of the totalitarian mindset. This trait is reflected in open society among those who seek to coercively limit freedoms that are the cornerstones of liberal democracy. As Jean-François Revel, the once widely celebrated French philosopher, noted, this trait is the “totalitarian urge” that lurks among us.

The Quebec government of Liberal Premier Philippe Couillard’s effort to police free speech through Bill 59 is an illustration of this perversity. Bill 59 apparently is the response to a proposal made by the Quebec Human Rights Commission to provide it with tools to initiate lawsuits against those who publicly engage in “hate speech.” At present only individuals may bring lawsuits on the grounds of discrimination under section 10 of the Quebec Charter of Human Rights and Freedoms.

It is Couillard’s contention that Muslim terrorism is brought about by criticisms of Islam. From this follows the view if such criticisms are disallowed then terrorism will end. And Jacques Fremont, president of the Quebec Human Rights Commission, has been public in stating he would sue those who “write against … the Islamic religion … on a website or on a Facebook page.”

The intent of Bill 59 is ironically consistent with the global agenda of the Organization of Islamic Cooperation (OIC) pushed by Saudi Arabia, Iran, Turkey and Islamist organizations worldwide. Since the late Supreme Leader Grand Ayatollah Ruhollah Khomeini of Iran pronounced his religious decree in February 1989 calling for the death of novelist Salman Rushdie as punishment for insulting the prophet of Islam, the push by the OIC at the UN to legally restrict and globally ban criticism of Islam as “defamation of religion” has intensified.

The 57 member states of the OIC are part of what was until recently described as the “Third World.” The reality of the Third World when compared to that of the first and second (former Soviet bloc of communist countries) worlds resides in its industrial, technological and scientific backwardness. This backwardness is compounded by the absence of democracy and its prerequisite, in other words a culture that values individual freedom and equal respect for the other.

As a Muslim born and raised within the world of Islam, I experienced the debilitating effects of the closed society on people, and how their aspirations for freedom are daily crushed by a culture suspicious of and punishing any new thinking as subversion of religious based customs.

Most Canadians and Westerners are unaware of instructions drilled into the impressionable minds of Muslim boys at a very early age in schools by mullahs, or religious teachers. They are taught that idolatry or associating a partner with Allah (shirk), unbelief (kufr), and apostasy (ridda) are crimes against God deserving of death, and that it is obligatory on Muslims to execute this punishment. They are taught any rule of law apart from Shariah is sinful and illegitimate, and that it is obligatory on Muslims to establish Shariah rule wherever they can and persist in the effort until the whole world eventually submits.

The result of such teaching, and the culture that perpetrates it, is the ideology of jihad that glorifies terrorism as the cult of martyrdom.

As a Canadian, I know the values of freedom and democracy are indispensable for the world of Islam if it eventually makes the transition from closed to open society. These values, especially freedom of speech, have to be vigorously defended and taught to immigrants from Muslim countries to embrace as citizens of a liberal democracy.

In places like Bangladesh bloggers have been hacked to death for practising free speech. In Iran, Saudi Arabia, and across the Middle East freedom of speech and freedom of religion are repressed with lashings, crucifixions, imprisonments and beheadings.

This is why Bill 59 is not merely a diminution of liberal democracy. It is worse. It is a betrayal of those Muslim immigrants and refugees in Quebec who came seeking freedom and democracy. And it is an abject capitulation in appeasing those Muslims who cling to the values of a closed society and fear, like rulers of the OIC countries, the culture of an open and free society.

Salim Mansur (2011): Delectable Lie: A Liberal Repudiation of Multiculturalism / Numerous videos of interviews about the book

Salim Mansur (October 2, 2008): Speech given at the conference Political Islam: A Threat to Our Freedoms organized by Point de Bascule

Joint letter by 14 intellectuals (September 6, 2011): A Call to McGill University and the Université de Montréal to Support Freedom of Expression

Muslims Facing Tomorrow and other Muslim anti-sharia organizations (National Post – July 30, 2015): Full page opposing the unfettered use of accusations of Islamophobia to inhibit free speech and silence the discussion on Islamist extremism in Canada / WebArchive – Archive.Today