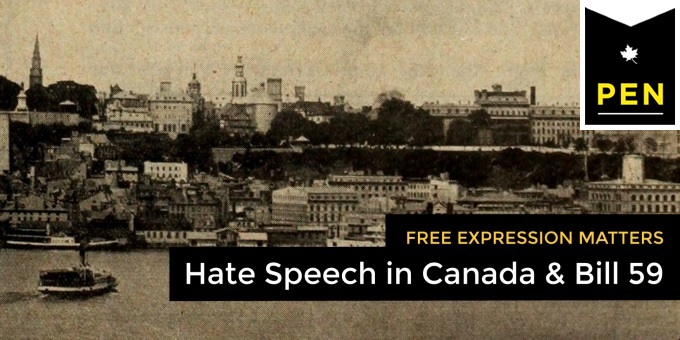 The PEN Canada document is presented by its author as an extension of the Report on free expression released by PEN International ahead of its 81st congress that took place in Quebec City on October 13-16, 2015. However, it is worth noticing that the October Report did not contain the slightest reference to ‘hate speech’ #Bill 59.

On October 19, 2015, the National Post Editorial Board deemed “troubling” / WebArchive – Archive.Today this PEN International’s decision to ignore #Bill59, “a threat that was being played out literally in front of PEN Internationals delegates’ noses in Quebec City during their congress.”

Here are some excerpts of the recent PEN Canada’s condemnation of #Bill59:

[B]ill [59] aims to combat speech that targets individuals or groups on the grounds of discrimination identified in the Québec Charter of Human Rights and Freedoms. These grounds include what is contained in most other provincial human rights codes including age, sex, colour and pregnancy but also “political convictions.” A restriction on speech that targets individuals or groups on the basis of political conviction is a serious restriction on civil and political dialogue. While the bill expressly states that its purpose is not to prohibit the dissemination of speech intended to “legitimately inform the public,” it would nonetheless pose a very real risk to those speaking and writing on contentious political matters, creating a potential chill where civil discourse matters most.

Not only does Bill 59 prohibit citizens from engaging in or disseminating hate speech, but also from acting in a way that causes the speech to be disseminated. This language casts an alarmingly wide net. For those in heated political discussions, will the defence of “legitimately informing the public” be sufficient against an anonymous complaints to the Commission des Droits de la Personne et des Droits de la Jeunesse the bill makes possible?

Bill 59 also allows individuals to report anticipated hate speech before any expression has been made, and the Act permits the Commission to apply to court for an injunction to stop the speech from happening. This would permit the policing of future speech.

Finally, the penalties for being found guilty of an offence would present a significant deterrent to the free expression of ideas. [Individuals between $2,000 and $20,000 and groups up to $250,000] With such vague language and high consequences, it is easy to see why many may abstain from dialogue for fear of prosecution.

National Post / Canada (August 15, 2015): EDITORIAL Bill 59 hate speech law “is a danger to democracy and should not pass”