National Post View: Bill 59 hate speech law “is a danger to democracy and should not pass” 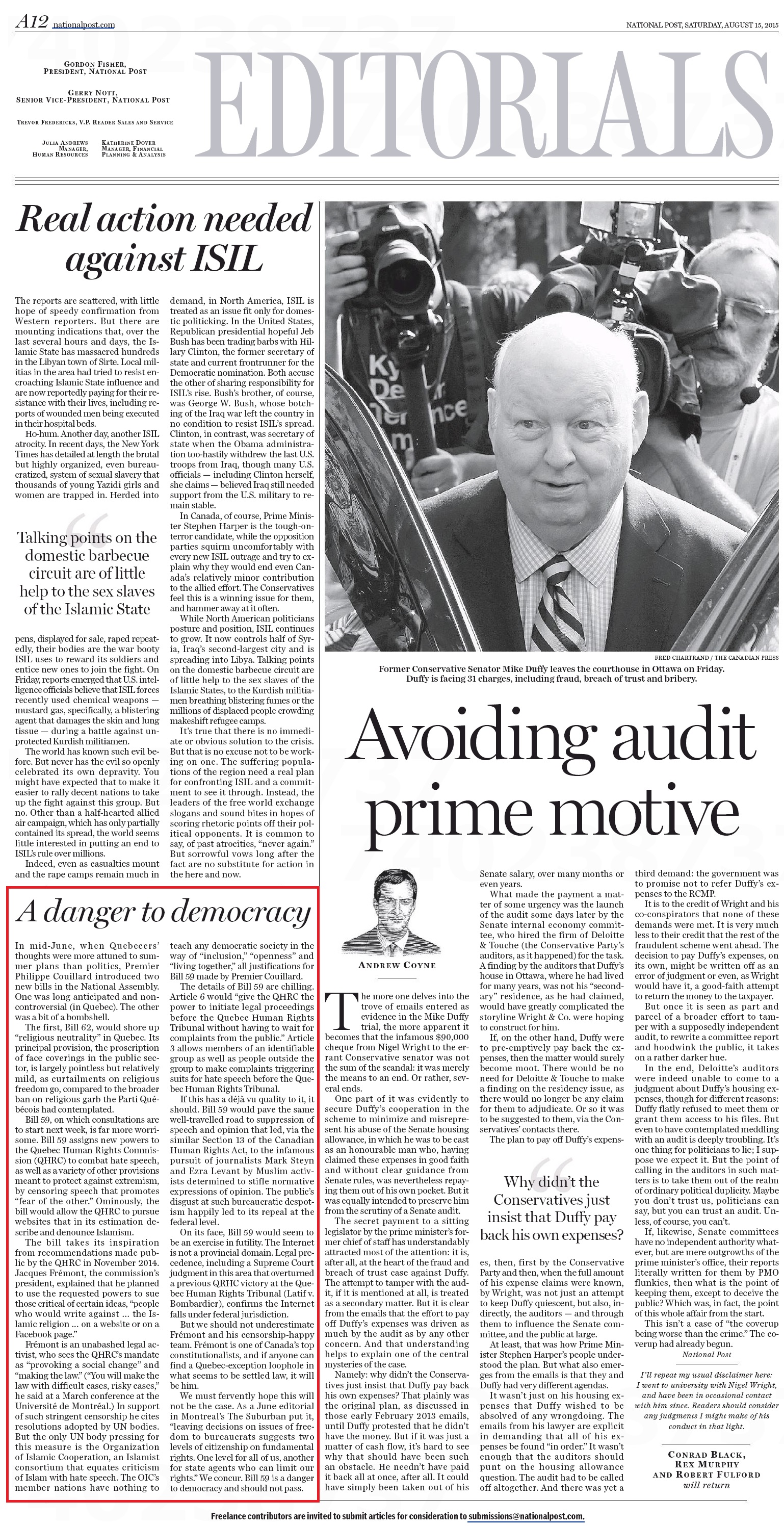 In mid-June, when Quebecers’ thoughts were more attuned to summer plans than politics, Premier Philippe Couillard introduced two new bills in the National Assembly. One was long anticipated and non-controversial (in Quebec). The other was a bit of a bombshell.

The first, Bill 62, would shore up “religious neutrality” in Quebec. Its principal provision, the proscription of face coverings in the public sector, is largely pointless but relatively mild, as curtailments on religious freedom go, compared to the broader ban on religious garb the Parti Québécois had contemplated.

Bill 59, on which consultations are to start next week, is far more worrisome. Bill 59 assigns new powers to the Quebec Human Rights Commission (QHRC) to combat hate speech, as well as a variety of other provisions meant to protect against extremism, by censoring speech that promotes “fear of the other.” Ominously, the bill would allow the QHRC to pursue websites that in its estimation describe and denounce Islamism.

The bill takes its inspiration from recommendations made public by the QHRC in November 2014. Jacques Frémont, the commission’s president, explained that he planned to use the requested powers to sue those critical of certain ideas, “people who would write against … the Islamic religion … on a website or on a Facebook page.”

Frémont is an unabashed legal activist, who sees the QHRC’s mandate as “provoking a social change” and “making the law.” (“You will make the law with difficult cases, risky cases,” he said at a March conference at the Université de Montréal.) In support of such stringent censorship he cites resolutions adopted by UN bodies. But the only UN body pressing for this measure is the Organization of Islamic Cooperation, an Islamist consortium that equates criticism of Islam with hate speech. The OIC’s member nations have nothing to teach any democratic society in the way of “inclusion,” “openness” and “living together,” all justifications for Bill 59 made by Premier Couillard.

The details of Bill 59 are chilling. Article 6 would “give the QHRC the power to initiate legal proceedings before the Quebec Human Rights Tribunal without having to wait for complaints from the public.” Article 3 allows members of an identifiable group as well as people outside the group to make complaints triggering suits for hate speech before the Quebec Human Rights Tribunal.

If this has a déjà vu quality to it, it should. Bill 59 would pave the same well-travelled road to suppression of speech and opinion that led, via the similar Section 13 of the Canadian Human Rights Act, to the infamous pursuit of journalists Mark Steyn and Ezra Levant by Muslim activists determined to stifle normative expressions of opinion. The public’s disgust at such bureaucratic despotism happily led to its repeal at the federal level.

On its face, Bill 59 would seem to be an exercise in futility. The Internet is not a provincial domain. Legal precedence, including a Supreme Court judgment in this area that overturned a previous QRHC victory at the Quebec Human Rights Tribunal (Latif v. Bombardier), confirms the Internet falls under federal jurisdiction.

But we should not underestimate Frémont and his censorship-happy team. Frémont is one of Canada’s top constitutionalists, and if anyone can find a Quebec-exception loophole in what seems to be settled law, it will be him.

We must fervently hope this will not be the case. As a June editorial in Montreal’s The Suburban put it, “leaving decisions on issues of freedom to bureaucrats suggests two levels of citizenship on fundamental rights. One level for all of us, another for state agents who can limit our rights.” We concur. Bill 59 is a danger to democracy and should not pass.