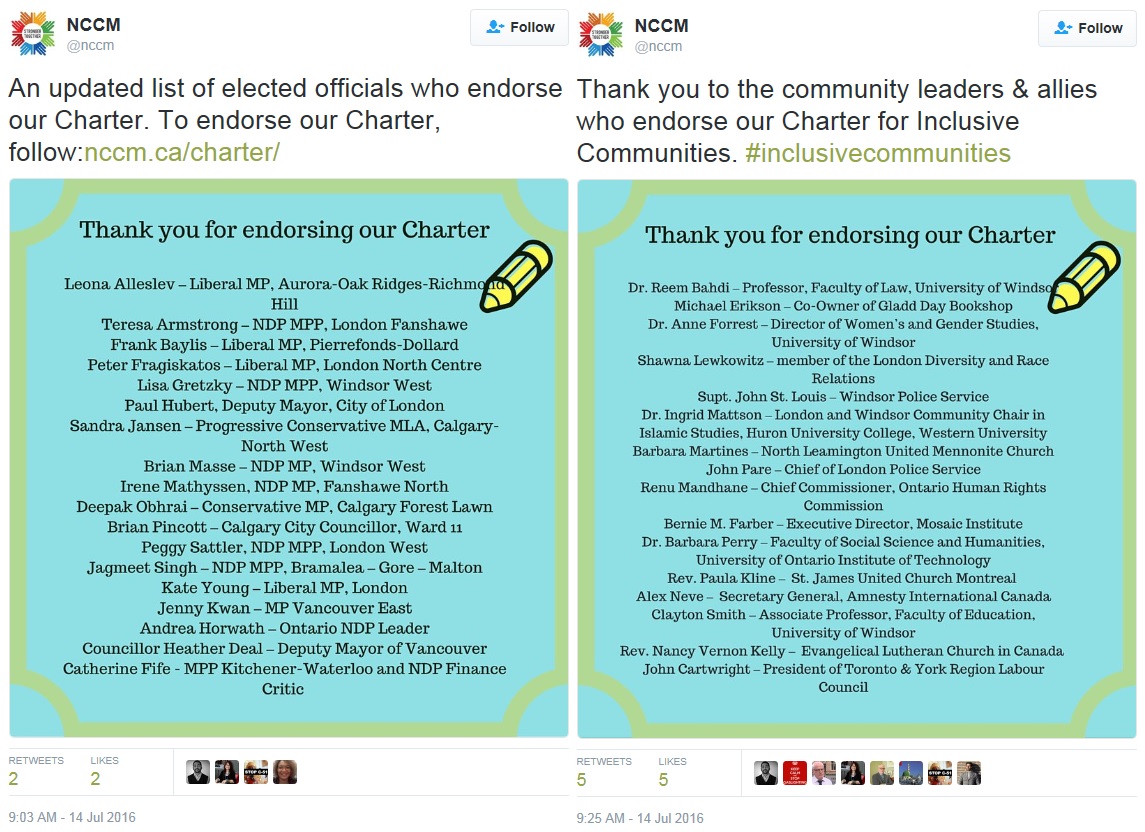 On July 4, 2016, elected officials and community leaders were invited by the National Council of Canadian Muslims (NCCM) to give a public endorsement to its Islamophobia charter in public events that were organized in six Canadian cities (Vancouver, Calgary, London, Windsor, Toronto, and Montreal). Point de Bascule already reported on this initiative:

As noted in a report broadcast by the Belgian public TV network RTBF shortly after the terrorist attacks in Brussels, the concept of ‘Islamophobia’ is being used by the Muslim Brotherhood and organizations close to it to prevent any criticism of Islam. In this Belgian TV report, sociologist Gilles Kepel highlighted that “Islamophobia is a weapon being used against non-Muslims who criticize Islam. It is also being used against those Muslims who have a wrong interpretation of Islam, in other words an interpretation that they disagree with.

In December 2012, the NCCM (then called CAIR-Canada) accused Point de Bascule of Islamophobia after we criticized Justin Trudeau (then a Liberal leadership candidate) for his decision to speak at the RIS convention in Toronto that month. Point de Bascule had condemned Mr. Trudeau’s decision because the event was being sponsored by IRFAN-Canada whose charitable status had been revoked by the Canada Revenue Agency the year before because it transferred funds to the terrorist organization Hamas. The same day, the NCCM had gone on the offensive and retorted that Point de Bascule was being “Islamophobic.” If the denunciation of an outfit whose charitable status has been revoked for funding terrorism is not acceptable to the NCCM, nothing short of a complete servility toward Islamists will pass the NCCM test and not be labeled “hateful” or “Islamophobic.”

On December 15, 2012, five days after the initial Point de Bascule article about IRFAN and Justin Trudeau was published and the news picked up by mainstream media, IRFAN withdrew its sponsorship of the event. What the NCCM presented as an irrational fear, a phobia, an Islamophobia proved to be a very legitimate concern. In 2014, IRFAN-Canada itself was added to Canada’s list of outlawed terrorist groups.

In September 2014, the RCMP had to distance itself from a booklet they had been working on with the NCCM after they realized that what had been sold to them as an initiative opposing terrorism and Islamophobia was, in fact, very problematic.

Among the North American Muslim scholars promoted in that booklet, the NCCM suggested many scholars with a radical past. Among them, Imam Siraj Wahhaj who advocated converting to Islam youth who felt excluded, and eventually arming them with Uzi submachine guns so that they can wage jihad in U.S. streets (Point de Bascule – Muslim Mafia / pp. 136-137). In the same booklet, the NCCM also endorsed Jamal Badawi who declared in an interview that Muslims should become judges and civil servants in North America and take advantage of their influential positions in order to stop applying current legal provisions that are incompatible with sharia.

Ingrid Mattson, who publicly came out in favour of the NCCM Islamophobia charter this year, was also among the North American scholars endorsed by the NCCM in its 2014 booklet. On July 7, 2016, The Lawfare Project released a communiqué indicating that Ingrid Mattson recently agreed to have the Superior Court of Ontario dismiss her defamation suit against David Harris, an Ottawa-based terrorism expert, who had called her “a radical’ in the past and exposed some of her links with Islamist organizations, such as ISNA and the International Institute of Islamic Thought, two Muslim Brotherhood fronts in North America.

According to Young Muslims Canada, in 2000, when she was asked at an ISNA conference to suggest the best tafseer (Koranic commentary) available, Ingrid Mattson answered that “So far, probably the best work of Tafseer in English is by Maulana Abul A’la Maududi [aka Syed Maududi].”

Maududi is an Islamist who was described as a supporter of slavery in a decision by Canada’s Immigration and Refugee
Board in 2000. Look for ‘Mawdudi’ and not ‘Maududi’ in the 2000 IRB decision / Archive.Today.

In the portion of his tafsir dedicated to verse 4:24, Maududi condoned the rape of non-Muslim female prisoners of war by Muslims. In recent months, this doctrinal justification led to the rape of Yazidi female prisoners of war on a large scale by the Islamic State in Iraq. According to the Guardian, “When [Abu Bakr al-Baghdadi] made his speech in July [2014] at Mosul’s Great Mosque declaring the creation of an Islamic state with himself as its caliph, [he] quoted at length from the Indian/Pakistani thinker Abul A’la Maududi [aka Syed Maududi], the founder of the Jamaat-e-Islami party in 1941 and originator of the contemporary term Islamic state.”

The relevant excerpt of Maududi’s tafsir is available on Point de Bascule. His whole English tafsir is also online.

In his book Jihad in Islam, Ingrid Mattson’s mentor also described the mission of Islam as being the “destr[uction of] all States and Governments anywhere on the face of the earth which are opposed to the ideology and programme of Islam.”

Point de Bascule (November 10, 2014): An Imam promoting armed jihad in U.S. streets and other radical scholars consulted by the NCCM “to gain an accurate understanding” of Islam 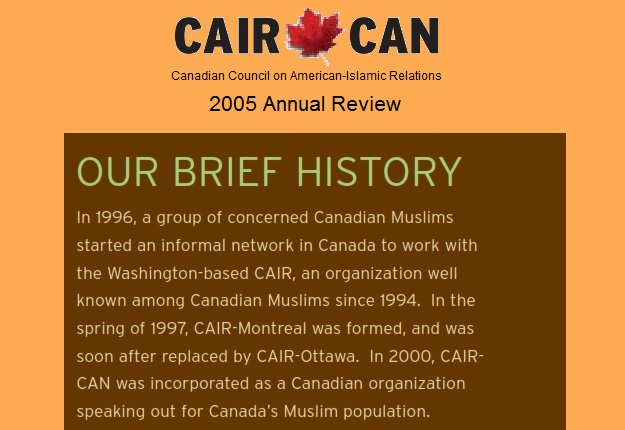 The NCCM started as CAIR-Montreal in 1996-97, then it became CAIR-Ottawa and it was incorporated as CAIR-Canada in 2000. It openly identified itself as the Canadian branch of the Washington-based Council on American Islamic Relations (CAIR). On December 16, 2003, then NCCM / CAIR-Canada Chair Sheema Khan swore in an affidavit supporting Washington-based CAIR in a legal trade-mark battle that it “has direct control” over CAIR-Canada’s activities in Canada. The same year, in a Journalist’s Guide to Islam conceived by CAIR-Canada (p. 15), Washington-based CAIR is described as “CAIR-CAN’s parent organization” (p. 14).

On June 16, 2008, Washington-based CAIR National Communications Director Ibrahim Hooper indicated that his organization consists of “35 offices and chapters nationwide and in Canada,” the Canadian chapter being what has become the NCCM. In 2009, the American judge Jorge Solis ruled that “The [U.S.] Government has produced ample evidence to establish the association of […] CAIR […] with Hamas” (pp.14-15 of 20). The same year, the FBI severed its ties with the Washington-based CAIR “amid mounting evidence that it has links to a support network for Hamas.”

In February 2016, the NCCM / CAIR-Canada and Washington-based CAIR were represented at a Muslim Brotherhood meeting sponsored by Turkish Airlines in Arlington, VA to discuss various topics including, you’ve guessed it, Islamophobia.

From two messages published by the NCCM on Twitter. The sources are available at the beginning of this article.