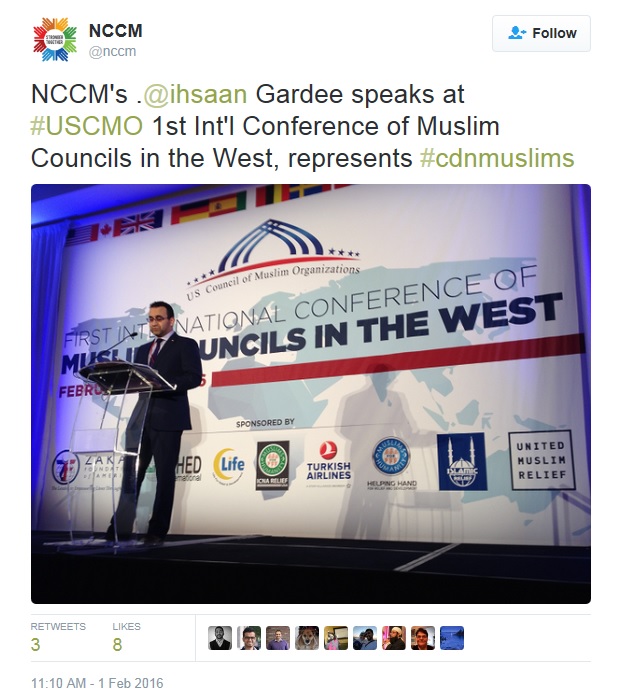 [EXCERPT] Providing further evidence that the Global Muslim Brotherhood is not the imagination of this publication, the US Muslim Brotherhood coalition known as the US Council of Muslim Organizations (USCMO) has announced that it held the 1st International Conference of Muslim Councils in the West February 1-3 in Arlington, Va. The USCMO announcement / WebArchive – Archive.Today described the conference as “a major initiative for Muslims in Western nations.”

{EXCERPT] Photos posted on Twitter have revealed further evidence that the recent inaugural conference for the “Muslim Councils in the West”, organized by the US Muslim Brotherhood coalition known as the US Council of Muslim Organizations (USCMO), was attended by a wide variety of European Muslim Brotherhood leaders as well as US government officials, and a prominent US academic supporter of the Global Muslim Brotherhood. One of those leaders is known to have been a trustee of an organization designated by the US as a terrorist group.

[…] Yet another photo / WebArchive – Archive.Today shows Ihsaan Gardee speaking at the conference. Gardee is the Executive Director of the National Council of Canadian Muslims (NCCM), known to be the Canadian branch of the Council on American Islamic Relations (CAIR). CAIR was founded / WebArchive in 1994 by three officers of the Islamic Association of Palestine, part of the US Hamas infrastructure at that time.  Documents discovered in the course of the the terrorism trial of the Holy Land Foundation confirmed that the founders and current leaders of CAIR were part of the Palestine Committee of the Muslim Brotherhood and that CAIR itself is part of the US. Muslim Brotherhood. As the GMBDW reported yesterday, CAIR leader Nihad Awad was featured as one of the twelve individuals representing the leadership of the conference. Awad was present during an infamous 1993 meeting held in Philadelphia by senior leaders of Hamas, the Holy Land Foundation, and the Islamic Association of Palestine (IAP).

The first article mentions the presence of the following participants:

Anas Altikriti (the most important leader of the Muslim Brotherhood in the UK);

The second article mentions the presence of other participants at the meeting:

Abdullah Benmansour (last known to be the President of the Federation of Islamic Organizations in Europe);

An unidentified US State Department representative speaking at the conference about Syrian refugees;

Iqbal Sacranie (A former Chairman of the Muslim Council of Britain);

Omer El-Hamdoon (President of the Muslim Association of Britain).

CBC / Power and Politics with Evan Solomon (January 28, 2014): VIDEO Ihsaan Gardee on CBC: “We [NCCM / CAIR-CAN and Washington-based CAIR] are two separate and distinct organizations… It’s like Pepsi and Coke.” (Partial transcript of the interview)