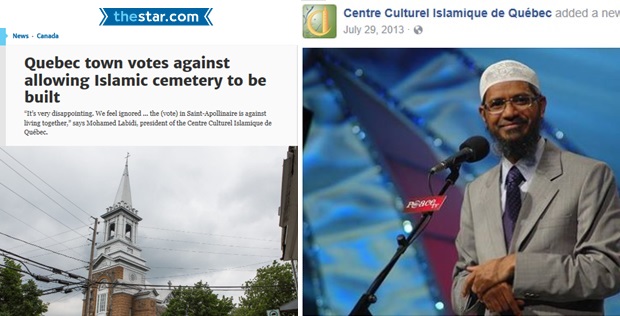 The project of Islamic cemetery on Quebec City’s south shore was led by the Centre culturel islamique de Québec (Quebec Islamic Cultural Centre / CCIQ). On July 17, 2017, on its Facebook page, the CCIQ is still endorsing / Archive.Today the Islamist Zakir Naik who is banned from entering Canada because of his support for terrorism.

On May 2, 2017, Point de Bascule published a profile of the Quebec Islamic Cultural Centre (CCIQ) highlighting the following points and others:

“It’s very disappointing. We feel ignored … the (vote) in Saint-Apollinaire is against living together,” says Mohamed Labidi, president of the Centre Culturel Islamique de Québec.

Muslims in the Quebec City area are facing disappointment and uncertainty after voters in a small town close to the provincial capital voted Sunday night to stop the development of a cemetery catering to the Islamic faith.

In a closely watched referendum Sunday night, just 36 residents of Saint-Apollinaire, a town of around 6,000 southwest of Quebec City, voted 19-16 to overturn zoning changes made earlier this year allowing the cemetery. One ballot was rejected.

“It’s very disappointing,” Mohamed Labidi, president of the Centre Culturel Islamique de Québec, told the Star Sunday night. “We feel ignored … the action in Saint-Apollinaire is against living together.”

The centre was the driving force behind the purchase of a plot of land beside an existing cemetery in Saint-Apollinaire earlier this year that members hoped would become their own. Now Labidi says he will be meeting with his administration to come up with another plan.

The result will have ramifications not just for Muslims in the Quebec City area, but across the province, given that there is only one Muslim-run cemetery in Quebec. Searches for other suitable land will likely be needed, Labidi says.

The project’s genesis goes back to 2016 when Sylvain Roy, the director of the non-denominational Harmonia funeral home in Saint-Apollinaire, heard from a Muslim family who couldn’t find a local cemetery where they could bury a loved one in accordance with the Islamic faith.

The lack of options for Muslims in the province became more widely known following a shooting rampage in January 2017 at a Quebec City mosque. The incident, which took place during evening prayers on Jan. 29, left six men dead and 19 others injured. One of the dead was buried in Laval, where the only Muslim-run cemetery in Quebec is located. The bodies of the other five were repatriated to their countries of origin.

In February, Harmonia funeral home agreed to sell a parcel of land to the Centre Culturel Islamique de Québec in Saint-Apollinaire, a deal that was unanimously approved by council when it voted for zoning changes that would allow for the Muslim-run cemetery.

The deal was put on hold thanks to a rule that allows residents whose properties could be affected by the zoning change to vote on council’s decision. Forty-nine residents registered to vote in early July, but only 36 cast their ballots Sunday.

Roy, of the Harmonia funeral home, told the Star the result is “not a good message to the Muslims of Quebec.”

“It’s quite difficult to understand what’s happened there. What we want to present is a symbol of harmony — just two cemeteries side by side,” he said. “It’s a symbol of what our country wants to say to the world but now we’ve received a no. It’s quite a surprise.”

Saint-Apollinaire Mayor Bernard Ouellet said he was disappointed by the result.

“My community in general, I think that above all, what led their choice was really fear and disinformation,” he told reporters. “I’m convinced of it.”

Opponents of the project said Muslims should be buried in Islamic sections of existing cemeteries. Sunny Létourneau, the leader of the Saint-Apollinaire group against the zoning change, told the Star last week that she believes cemeteries run by religious groups of any kind cause problems because of their exclusivity.