In 2008, Samer Mazjoub was identified as a MAC leader when the CBC asked him to comment about the Bouchard-Taylor report which was about to be made public.

In February 2014, the Kuwaiti KUNA press agency announced that a Montreal high school administered by Samer Al-Majthoub (aka Samer Majzoub) received an amount equivalent to $US 70,671 from the embassy of Kuwait in Canada. The embassy was acting on behalf of Kuwait’s Ministry of Awqaf and Islamic Affairs.

Recent GMBDW articles have highlighted other recent contributions made by Kuwait authorities to Muslim Brotherhood organizations in Switzerland and in Poland.

In the KUNA article, Samer Majzoub is identified as the “financial manager” of the high school but the name of the school itself is not mentioned. However, Majzoub’s role with the Islamic Le Savoir High School is well known in Montreal. The school’s own documents identify Majzoub as its founder and a member of its board. The Quebec Registry of Enterprises (QNE 1165169500) also lists Samer Majzoub as the treasurer and the vice-president of Ecole Le Savoir.

Before getting its own registration number from the Quebec Registry of Enterprises in 2009, Ecole Le Savoir was one of many names used by the Muslim Association of Canada (MAC) in Montreal to mobilize the local Muslim community towards its radical objectives. MAC’s file in the Quebec Registry of Enterprises indicates that Ecole Dar Al-Iman (from 2001 to 2003), Mosquée Alrawdah (since 2009) and Centre communautaire Laurentien (since 2009) are other alternate names that were used or are still used by the MAC. 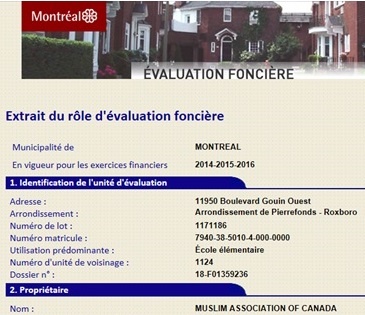 Le Savoir Islamic High School is located at 11950 Gouin W. in Montreal. The City of Montreal Property Assessment Service indicates that the Muslim Association of Canada is registered as the owner of the building since April 29, 2008.

In 2008, Samer Mazjoub was also identified as a MAC leader when the CBC asked him to comment on the Bouchard-Taylor report which was about to be made public.

In 2012, Point de Bascule dedicated a portion of a profile of the Canadian Muslim Forum (CMF) to its president Samer Majzoub. CMF is one of many organizations set up by the Muslim Brotherhood infrastructure in Canada. It is mostly active in Montreal. As GMBDW pointed out in the past: “One of the most ubiquitous tactics of the Global Muslim Brotherhood is the establishment of a dizzying number of organizations and initiatives which create the impression of broad based support when, in reality, the sponsors are the same individuals and groups whose leaders have not changed in many years.”

In 2001, Samer Majzoub was on the board of another Islamic school in Montreal, the Institut d’enseignement Dar Al Iman (also on Archive.today) when it received a donation from the Saudi World Assembly of Muslim Youth (WAMY). In 2012, WAMY’s charitable status was revoked after the Canada Revenue Agency discovered that it funded the al-Qaeda-linked Benevolence International Foundation (BIF). A money transfer from WAMY to this al-Qaeda affiliate took place in 2001, the same year that Dar al-Iman, then managed by Samer Majzoub, Lazar Aissaoui and Mohamed Zrig received money from the Saudi terror-funding WAMY.

The listing of WAMY’s donees (recipient organizations) for 2001 is available on the Canada Revenue Agency’s website (also on Archive.today).

Frequently, Islamists who are engaged in what they describe as “a kind of grand Jihad in eliminating and destroying the Western civilization from within,” try to fool politicians and the media by claiming that they do not represent a threat because they have never been charged with any violent activities. As if their project had only a violent component. Over the years, terror funding organizations such as WAMY, IRFAN-Canada, WICS and others have probably funded more non-violent activities than violent ones. By funding violence and threats of violence, these organizations do give more leverage to their so-called “moderate” and “non-violent” protégés.

The violence and the threats of violence enable the latters to introduce themselves as the “moderate alternative” to that of their violent brothers. By resorting to “bridge building” and other networking schemes, they have succeeded in misleading police organizations and other Western security agencies about the real nature of the Islamist threat and the means to counter it.

In February 2003, Samer Majzoub gave the full measure of his “moderation” when he got involved in the organization of a conference featuring Yvonne Ridley. Majzoub was the spokesman for Ridley’s conference in Montreal. The organizers were the Muslim Association of Canada and three other Muslim Brotherhood-linked organizations. .

Already in February 2003, Yvonne Ridley had expressed her fondness for the Taliban. After being jailed by the Taliban while working undercover as a journalist in Afghanistan, Ridley developed an interest for Islam and later converted. These were the circumstances that led Samer Majzoub, the Muslim Association of Canada and other Islamists to promote her in Canada in 2003. In her 2003 Canadian tour, she also stopped in Toronto. A report entitled Former captive now a Taliban fan was published about Ridley’s conference by the Toronto Star on February 26, 2003.

Yvonne Ridley’s “spiritual journey” led her to take more radical positions. Some of them were summarized by National Post columnist Barbara Kay in 2007 when the British activist came back to Canada. In 2004, Yvonne Ridley stated that Shamil Basayev who planned the children massacre in a Beslan school (Chechnya) had become a “shahid”, a martyr whose place is assured in paradise, after he was killed. In 2006, Ridley expressed her support for Hamas in a debate at the London Imperial College (“pretty much in line with Hamas”). This organization is dedicated to the destruction of Israel and the implementation of sharia worldwide. In 2006, Ridley incited Muslims in London not to cooperate with local police.

According to its own website (also on Archive.today), the Kuwait’s Ministry of Awqaf and Islamic Affairs that funded Samer Majzoub’s high school “seeks to communicate with Muslim communities to spread moderate Islam.”

Samer Majzoub’s own track record and more generally the Muslim Association of Canada’s track record of endorsing Islamist radicals, such as Hamas, Ekrima Sabri, Salah Soltan, Hassan al-Banna, Yvonne Ridley, and many others help better understand where their concept of “moderate Islam” leads to.

In 2011, Nabil Abuthuraia (aka Museb Nabil Abu-Thuraia), another current administrator of Le Savoir High School, was president of the Muslim Students Association (MSA) at Concordia University in Montreal when it paid to rent a hall where a conference by British Imam Abdur-Raheem Green and Hazma Tzortzis was scheduled to be held. These men and their Islamic Education and Research Academy (iERA) openly promote the implementation of sharia principles, such as the killing of homosexuals, resorting to violence against misbehaving wives, etc.

On October 18, 2011, after the conference was announced, the Quebec National Assembly unanimously adopted a motion asking the federal government to ban these preachers from entering Canada because of their incitement to violence.

On October 25, 2011, Concordia’s newspaper The Link reported that then MSA Concordia president Museb Nabil Abu-Thuraia stood by his decision and said: “I had nothing against the speakers [Green and Tzortis] or the association [iERA]. We looked at the group and their goal, and it seemed fine with us.”

After pressures by Concordia University officials, the meeting was finally moved to the Centre communautaire Laurentien, a MAC hall in Montreal.

Chiheb Battikh, another administrator of the Islamic Le Savoir High School, made the headlines last March when he was convicted to six years in jail for the kidnapping of a child for ransom. The kidnapping occurred in December 2012, less than two months after his mandate as one of the school administrators was completed.

After Battikh’s arrest Point de Bascule came up with the scoop that he was an important leader of the Muslim Association of Canada (MAC), the main Muslim Brotherhood organization in Canada. This initial announcement was followed by a more elaborate PdeB report focusing on the various Islamist organizations led by Battikh in recent years, including Le Savoir Islamic High School.

At the time of his arrest, the Springs for knowledge’s website (a MAC’s substructure) indicated that Battikh was head of MAC Education Department and director of the Canadian Institute of Islamic Civilization, another MAC substructure that recently acquired a prestigious building on Belmont Street in downtown Montreal. Battikh was responsible for the purchase of the building until his arrest. The trial for kidnapping revealed that Battikh was paid $4,000 a month by MAC to manage their activities. He was planning to ask for a $500,000 ransom.

The list of the school’s administrators as it appeared on the Quebec Registry of Enterprises in late 2012 is archived on Point de Bascule. In 2010, Chiheb Battikh organized a MAC Youth activity at the Islamic Le Savoir High School. 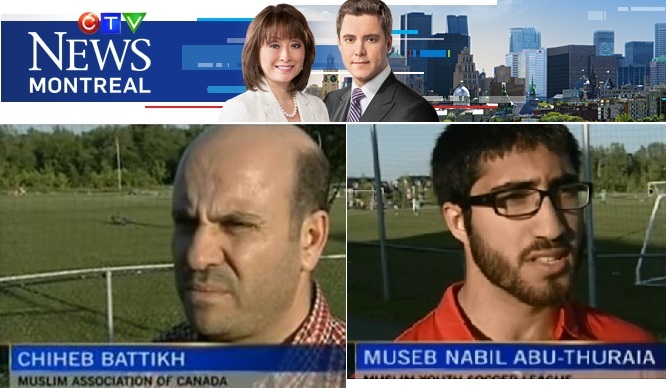 On June 20, 2011, CTV reported the opposition of the future Islamist kidnapper Chiheb Battikh and Museb Nabil Abu-Thuraia to a decision taken by a Montreal soccer federation to implement FIFA rules banning the wearing of hijab and other political, religious, personal and commercial symbols on a soccer field. The name of the Muslim Youth Soccer League represented by Abu-Thuraia in 2011 is only partially visible in the archived video.
Share this story: