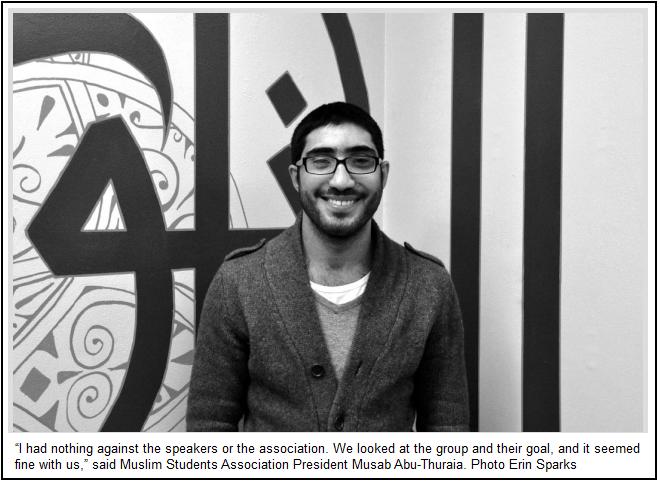 A speech by a controversial cleric scheduled to take place on campus was cancelled this week, after the Muslim Students’ Association was approached by the Concordia Student Union and a university official about potential backlash to the event.

The speech was to be given by British Imam Abdur-Raheem Green, who has been criticized for allegedly calling for harsh punishments for homosexuality, condoning domestic violence towards women and controversial remarks about Islamic-Jewish relations.

“I was approached by CSU President [Lex Gill] and Dean of Students [Andrew Woodall] to talk to me about how this event could attract negative media attention to our association,” said MSA President Musab Abu-Thuraia. “We took that into consideration, and we took into consideration that it was not our event initially, and decided not to go through with it.”

Abu-Thuraia said the event was not planned by the MSA, but that the group was approached by a former MSA member, who asked that the group book the atrium in the MB Building for the event.

While the MSA was scheduled to pay for the space, they were to be reimbursed by the Islamic Education and Research Academy, the group to which Green belongs. Abu-Thuraia said the space was booked before he could consult the rest of the MSA executive due to Concordia requiring a 30-day advance notice, but cancelled the speech after speaking with Gill and Woodall.

The event was ultimately held at the Centre Communautaire Laurentien on Friday, without any affiliation with the MSA.

Concordia spokesperson Chris Mota said that while the decision to cancel was made by the MSA, “The university certainly supports that decision,” adding that there has been feedback from Jewish, feminist and gay and lesbian groups within the community who opposed Green’s presence.

“When the controversy started, there was communication with the students saying, ‘You realize there’s a controversy, people are saying certain things, do you know who you’re bringing in? Are you comfortable with this? Can you ensure that the event will run smoothly?’ They thought about it, and they decided to pull out.

“I think it’s pretty clear that a lot of what this individual would say was not going to be popular, and in fact would be inflammatory,” she added. “But if it hasn’t broken Canadian law, and if this person is allowed to speak in Canada by the authorities, it’s a tough call for a university to say, ‘No, you can’t speak here.’”

In the past, Green has been refused entry to Australia due to his views. On Oct. 18, members of the National Assembly in Quebec voted on a motion to encourage the Harper government to deny Green entry into Canada.

Abu-Thuraia, on the other hand, said that while he doesn’t necessarily agree with Green or other members of the IERA, which describes itself as “a global dawah organization committed to presenting Islam to wider society,” he supported their right to speak on campus.

“For me, in principle, I had nothing against the speakers or the association. We looked at the group and their goal, and it seemed fine with us.”