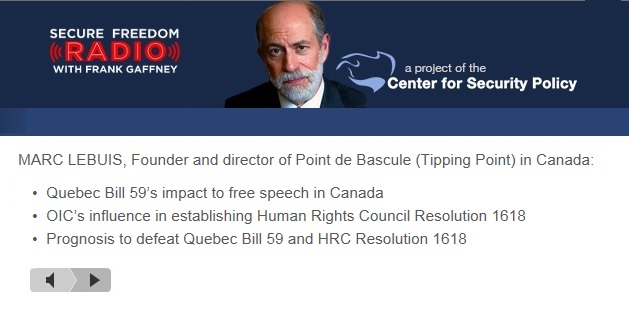 Click on the image to listen to the interview

After Barbara Kay’s recap on Quebec’s ’hate speech’ #Bill59 was published by the National Post / Archive.Today on January 5, Frank Gaffney of the US-based Center for Security Policy contacted Point de Bascule to get our point of view on what could be done against this bill. Mr. Gaffney insisted that the threat to free speech represented by #Bill59 is not limited to Quebec or even Canada. As the Quebec Human Rights Commission President, Jacques Frémont, clearly pointed out in the past, his request for more powers to sue websites criticizing Islam was based on resolutions adopted by the United Nations on the matter.

Marc Lebuis’ interview is accessible by clicking on the image above.

National Post / Canada (August 15, 2015): EDITORIAL Bill 59 hate speech law “is a danger to democracy and should not pass”