Tariq Ramadan: “What I want to reform is your head, not Islam! Islam does not need reforms.”

Tariq Ramadan made his intervention in Niger in August 2015 in front of a Muslim audience during a meeting that was organized by his Qatar-based research centre on sharia and the CIMEF, an organization of French-speaking Muslims. CIMEF, mostly active in Africa, was the last component added to Tariq Ramadan’s network Muslim Presence. Ramadan was listed as a member of CIMEF’s steering body from 2010 to 2015.

Tariq Ramadan’s Qatar-based research centre on sharia published a video of one of his interventions in French in which he states that he never sought to reform Islam: “What I want to reform is your head, not Islam! […] Islam does not need reforms.”

0:16 TARIQ RAMADAN: [Translation by Point de Bascule] This leads me to the other question that you asked. You asked the following rhetorical question: Do we change the texts to adjust to reality or do we use the texts to transform reality? You did not hear the first option from any speaker. We all agree that we want to respect the texts. Do you know one person who told you that he is not serious about respecting the texts? And we want to be serious. Some of the persons who read me and some of those who quote me misrepresent what I say. For example, these hackneyed formula that we see everywhere: “You want to reform Islam.” I have never said that. As for me, what I want to reform is your head, not Islam! It’s our intelligence, our way to read the texts. Islam does not need reforms but our intelligence needs to be reformed, the way we read the texts…

For many years however, after the September 11 attacks in particular, media and some of Ramadan’s associates presented him as a reformer in line with Martin Luther or Vatican II. This image served him well while he was trying to expand his influence, among non-Muslims in particular.

In 2000, Time magazine named Tariq Ramadan one of the most important “innovators” / Archive.Today of the twenty-first century.

In 2002, the internet magazine Salon.com described him as “the Muslim Martin Luther” / Archive.Today.

In 2004, the organization Muslim Presence took advantage of the term ‘reform’ and announced that its founder Tariq Ramadan would present a conference in Montréal on how to “reform the miserable realities […] that are experienced by many people in the world and even by large portions of our consumer societies.” The event was moderated by Daniel Weinstock who became, a few years later, a member of the Bouchard-Taylor Commission’s advisory committee (p.302).

In 2009, in his preface to Gregory Baum’s book on the theology of Tariq Ramadan, Salah Basalamah contributed to the confusion on the so-called reform advocated by Tariq Ramadan when he wrote that “The convergence that is the object of Baum’s argument is one that brings together in a comparative approach the reformist Catholicism of Vatican II and the reform movement in Islam, specifically the one situated in the West and exemplified by Ramadan” (Gregory Baum, The Theology of Tariq Ramadan, 2009, Novalis).

Salah Basalamah and Tariq Ramadan have been close partners for many years. Already in 1993, while they were based in Geneva, they set up the Foyer culturel musulman (Muslim cultural centre) with the intent of coaching and steering (encadrer in the original French version) the city’s Muslims. In 2008, the former dean of McGill University Faculty of Law, Peter Leuprecht, introduced Basalamah as “Tariq Ramadan’s representative here in Canada.” Salah Basalamah was privately consulted by the Bouchard-Taylor Commission at the beginning of its activities in 2007.

Already in the early 2000s, Tariq Ramadan had provided enough hints to make it clear that the “reformism” he was advocating was the “Salafi reformism,” a return to the past, to principles as they were interpreted by the salaf, the first generations of Islam.

Ramadan had summarized his thinking in an interview given to the French network Beur FM in November 2003:

Tariq Ramadan: There is the rationalist reformism and the Salafist school, in the sense that the Salafist tries to remain faithful to basic principles. I belong to the latter; that is to say, there’s a certain number of principles that are, for me, fundamental and that, as a Muslim, I refuse to betray.”

Journalist Martine Nouaille reported his statement in an AFP article on November 15, 2003 and Caroline Fourest quoted it in her book dedicated to Ramadan / Archive.Today (ALSO Brother Tariq on Google Books, p.119).

In his book Western Muslims and the Future of Islam (p.26), Tariq Ramadan lists Syed Maududi, Hassan Al-Banna and Sayyid Qutb among the main representative of the so-called “Salafi reformist” trend to which he belongs. In a homage to his father Said Ramadan published on August 4, 2005, his son Tariq highlights that Maududi (Mawdudi) gave credit to his father Said for “for having awakened him from his unconsciousness” / Point de Bascule.

Here is how Syed Maududi summarized his mission (and that of his follower Tariq Ramadan) after having been “awakened”:

Syed Maududi: The aim of Islam is to bring about a universal revolution….Islam wishes to destroy all states and governments anywhere on the face of the earth which are opposed to the ideology and programme of Islam….The purpose of Islam is to set up a state on the basis of its own ideology and programme. (Jihad in Islam / WebArchive – pp.6 and 22)

When Tariq Ramadan talks about “reforming the head” of those he addresses, this is the kind of reform he has in mind. 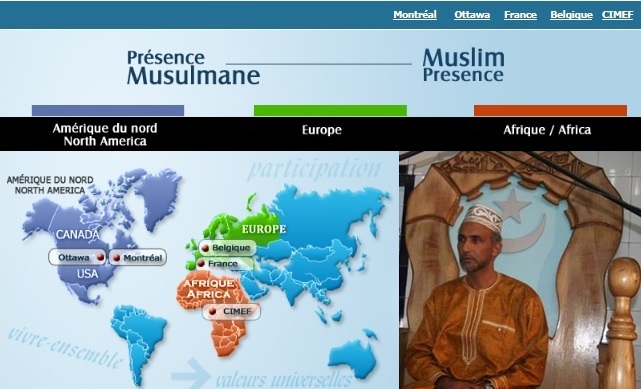 CIMEF and other Muslim Presence’s bases of operations in the world, as they were presented on the organization’s website in 2011. Right, a picture of Tariq Ramadan taken during an activity in the Ivory Coast in 2010.

Point de Bascule (January 26, 2016): The Canadian Department of Foreign Affairs withdraws the praises for Tariq Ramadan from its website after a TVA report