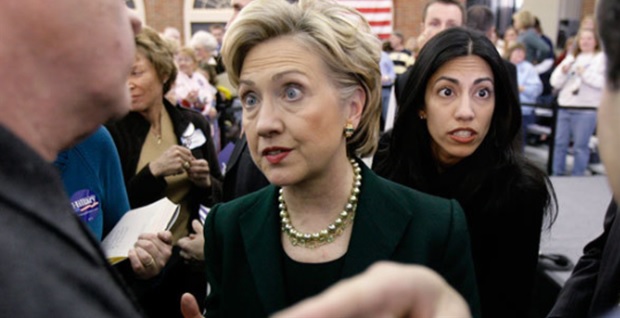 Despite the old and new scandals swirling around her, Hillary Clinton still has a better chance of being elected president of the United States next week than anyone else. Once installed in the Oval Office, she is likely to govern in the same way she has behaved during three decades of public service.

Regarding the global jihad threat, that could herald nothing less than national and global catastrophe.

[T]he governments of Qatar and Saudi Arabia … are providing clandestine financial and logistic support to ISIL and other radical Sunni groups in the region.

The Islamic State is not the only questionable recipient of Saudi and Qatari largesse, according to the Daily Caller [/ WebArchive – Archive.Today]:

Qatar has given between $1 million and $5 million to the Clinton Foundation and Saudi Arabia has donated upwards of $25 million dollars to the Foundation.

During the third presidential debate, Donald Trump mentioned the donations she had received from Saudi Arabia and Qatar. He asked Clinton [/ WebArchive – Archive.Today]:

Why don’t you give back the money that you’ve taken from certain countries that treat certain groups of people so horribly?

Accepting huge sums of money from governments that Hillary herself stated fund the Islamic State is bad enough. What’s even worse is that the donations seem to influence her positions.

There are many, many, troubling indications that Clinton is susceptible to bribes.

Just to give you some context, the condition upon which the Moroccans agreed to host the meeting was her participation. If hrc was not part if it, meeting was a non-starter. CGI [Clinton Global Initiative] also wasn’t pushing for a meeting in Morocco and it wasn’t their first choice. This was HRC’s idea, our office approached the Moroccans and they 100 percent believe they are doing this at her request.

The King has personally committed approx $12 million both for the endowment and to support the meeting. It will break a lot of china to back out now when we had so many opportunities to do it in the past few months. She created this mess and she knows it.

The king of Morocco gave $12 million to the Clinton Foundation “to support” a meeting with Clinton.

On April 16, 2012, while Clinton was still secretary of State, Amitabh Desai of the Clinton Foundation wrote [/ WebArchive – Archive.Today] that Qatar’s ambassador:

… would like to see WJC [Bill Clinton] ‘for five minutes’ in NYC, to present $1 million check that Qatar promised for WJC’s birthday in 2011.

One million dollars as … a birthday present? Or did Qatar get something out of it?

According to a May 2015 International Business Times report [/ WebArchive – Archive.Today]:

[D]uring the three full budgetary years of her tenure, Qatar saw a 14-fold increase in State Department authorizations for direct commercial sales of military equipment and services, as compared to the same time period in Bush’s second term.

The department also approved the Pentagon’s separate $750 million sale of multi-mission helicopters to Qatar. That deal would additionally employ as contractors three companies that have all supported the Clinton Foundation over the years: United Technologies, Lockheed Martin and General Electric.

All this went to Qatar, which is not only a funder of the Islamic State, but also of al-Qaeda, Hamas, and Boko Haram [/ WebArchive – Archive.Today].

That’s right, Boko Haram — a player in yet another Clinton scandal.

Hillary Clinton’s obstruction of the Boko Haram terror designation in the face of FBI, CIA, DOJ, and Congressional urging to do so is a documented fact.

But the reason for Hillary’s obstruction, which the establishment media has never pressed Clinton for, remains unanswered.

In March 2015, Bridget Johnson of PJ Media reported [/ WebArchive – Archive.Today] that Senator David Vitter (R-LA) had a suggestion for the answer:

Vitter has suggested that Clinton’s deep donor ties to Gilbert Chagoury, a major Lebanese-Nigerian land developer who has given millions [/ WebArchive – Archive.Today] to Democratic campaigns, the Clinton library and Clinton Foundation global initiatives, could have accounted for some of Clinton’s reticence in the terror designation — a recognized terrorist group operating in the region, after all, makes more than a dent on local economies and investors get scared off.

Coincidences? What are we to think when such “coincidences” keep piling up, and they all look exactly the same, and all point in the same direction?

We are to think that President Hillary Clinton could be tempted by monetary favors to give aid and comfort to the enemies of the United States.

A Hillary Clinton presidency could prove to be the biggest boost that jihad forces worldwide have received since … the presidency of Barack Obama.