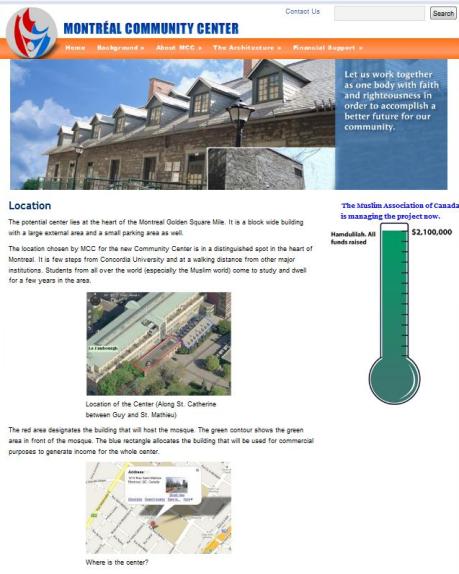 In a letter published by Le Devoir on July 13th 2010, Phyllis Lambert* and Serge Joyal** ask the Charest Government to reconsider its decision to purchase the building that the Muslim Association of Canada (MAC) was going to acquire in downtown Montreal in order to establish a mosque and a community center. They stated that there was nothing in the MAC’s project that would threaten the historical and architectural qualities of the building and thus concluded that the Government’s decision had the appearance of excluding the Muslim community.

By neglecting to discuss the aspects of the MAC’s program as well as the other organisations involved in the project, Ms. Lambert and Mr. Joyal are making those who are opposed to the project look like bigots. As for Point de Bascule, our opposition to the MAC’s project has never been motivated by a hostility towards a new Muslim house of worship. From the very beginning, PdeB made it clear that the problem was the political program of the organisation behind the project.

We believe that an opposition to a MAC-led mosque based on an in-depth examination of its political goals and objectives demonstrates a responsible attitude and a commitment towards individual freedom rather than closed-mindedness.

The mosque project that was to be implemented inside the historical Grey Nun’s building was launched by the Muslim Student Association (MSA) branches of both McGill and Concordia Universities. The MSA was founded in 1963. It was one of the first communication channels that the Muslim Brotherhood established in North America. The affiliation of both Montreal universities to the MSA is explicitly mentioned in their respective constitution available on the Internet. 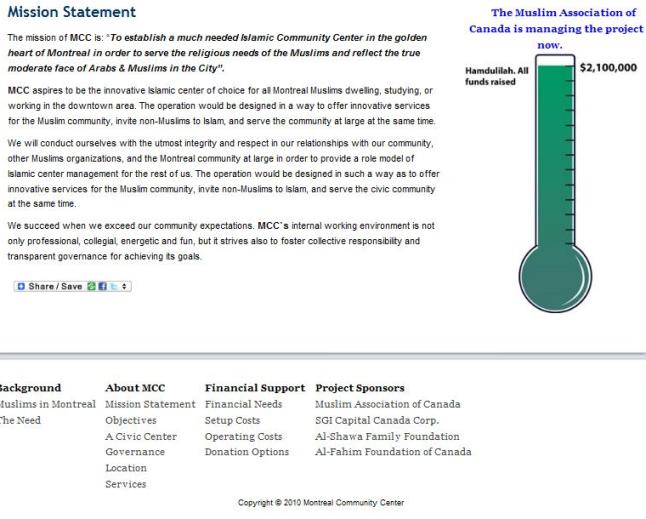 To manage their mosque project, the McGill and Concordia MSA branches constituted the Montreal Community Center (MCC). Eventually the MCC entrusted the management of the project to the MAC, the Muslim Brotherhood arm operating in English Canada. Présence Musulmane Canada (PMC) headed by Salah Basalamah acts as a counterpart to the MAC in French Canada. The MAC and PMC jointly organised the April 2010 conferences of Tariq Ramadan when he visited Montreal.

On its website, the MAC declares that it “adopts and strives to implement Islam, […] as understood in its contemporary context by the late Imam, Hassan al-Banna. MAC regards this ideology as the best representation of Islam as delivered by Prophet Muhammad.”

A summary of Hassan al-Banna’s doctrine is available in the 50 point manifesto that he sent to several political leaders of the Arab world in 1947. The manifesto promotes the abolition of political parties and the establishment of a single party system; the modification of the laws so that they conform to shariah; the multiplication of associations dedicated to promoting the spirit of jihad amongst the youth; the closure of dance halls and the censorship of movies and plays and so forth. In his manifesto, al-Banna stated his intention to impose a unique dress code to the entire population. Faced with the Egyptian authorities’ refusal to implement al-Banna’sprogram, his organisation multiplied acts of terror in Egypt, including the assassination of the Prime Minister in 1948.

In one of his essays, On Jihad, al-Banna explains that “it’s an obligation for us [Muslims] to fight against them [the infidels] after inviting them [to join Islam], even if they do not fight against us. (Five Tracts, Translated by Charles Wendell, Berkeley, University of California Press, 1978, p. 147)

To inspire his troops, Hassan al-Banna recalled in his essay To What Do We Invite Humanity? that in history many leaders experienced modest beginnings before finally achieving “success and fortune”.  He mentioned several Muslim warlords who inspired him. Only one was non-Muslim. It was Adolph Hitler. Today, the spiritual leader of the Muslim Brotherhood, Yusuf al-Qaradawi, frequently reminds us through statements made in the Arab media that the Islamist organization is still a fierce enemy of individual freedoms.

In recent years, al-Qaradawi promoted the killing of apostates from Islam [islamonline.net] and homosexuals [video 5:27], he introduced Hitler as a messenger of Allah who came to punish the Jews [video], he urged Muslims to conquer the West [video], he favoured female genital mutilations and so forth.

When the Islamist militants behind the Montreal downtown mosque project declare that they will “adopt and strive to implement Islam, […] as understood in its contemporary context by the late Imam, Hassan al-Banna”, they are announcing that they will devote their efforts to make these principles triumph.

During the two trials having lead to the conviction in 2008 of several members of the U.S. Muslim Brotherhood network for financing terrorist activities in the Middle East through the United States, the prosecution presented as evidence an internal memorandum of the organization. A list attached to the main document confirms that the MSA, which coordinates the activities of its McGill and Concordia chapters is indeed part of the North American network of the Brotherhood.

The internal document also clearly mentions the goal pursued by the organisation in North American. The excerpt reads as follows:

“The Ikhwan [the Brotherhood] must understand that their work in America is kind of a grand Jihad in eliminating and destroying the Western civilization from within and sabotaging its miserable house by their hands and the hands of the believers so that it is eliminated and God’s religion is made victorious over all other religions. […] It is a Muslim’s destiny to perform Jihad and work wherever he is and wherever he lands until the final hour comes.”

A Diversified Opposition to the Muslim Brotherhood

If we needed a convincing proof that opposing the Muslim Brotherhood does not equate to the ostracising of Muslims in general, it came from none other than Muslims themselves on the very day that Le Devoir published Phyllis Lambert and Serge Joyal’s letter.

In the July 13th edition of La Presse, an article from France-Presse reports that several groups of Jordanian women opposed a bill promoted by the local Muslim Brotherhood branch which seeks to allow the marriage of 15 year old girls while maintaining the minimal age to 18 for boys. The Jordanian women opposed to the bill argue that legalizing the marriage of very young girls equates to legalising rape. Hamman Said, the local Jordanian Muslim Brotherhood leader, replied that “shariah law allows marriage under the age of 18 if the spouses have reached a certain level of maturity.” He also added that  “disastrous consequences” await women who “adopt the ways of Western education”.

It was also by invoking shariah law that in the past the Muslim Brotherhood opposed criminal penalties for fathers who kill their daughers. These reforms were promoted by Queen Rania of Jordan. It is a recognized principle of shariah law [notably in the Umdat al-Salik, Ahmad ibn Naqib al-Misri, Beltsville, Amana Publications, 1994, pp. 583-584] that a father cannot be punished for the murder of his children. This principle constitutes an endorsement of honour killing. Applying Islam as it was understood by Hassan al-Banna, applying shariah leads to this as well.

Several opponents of the totalitarian ideals of the Muslim Brotherhood are Muslims and former Muslims who have seen firsthand the damage caused by the application of Islamist principles. At Point de Bascule, Muslims like Tarek Fatah and Salim Mansur have helped us understand the subtleties of the Islamist threat.

The Mosques, Our Barracks

In his book Auspices of the Ultimate Victory, Youssef al-Qaradawi explains that the success of his variety of Islam in the West was the result of the groundwork brought about by the Muslim Brotherhood and the contributions in petrodollars by Gulf state billionaires. The mosques used as advance bases for the Muslim Brotherhood in order “to destroy from within the Western civilization” are often built with the financial backing of governments that domestically persecute those who do not share their religious beliefs. It is likely that the Montreal project has benefited from such foreign contributions.

In these circumstances, we must keep in mind that the opening of a mosque controlled by the Muslim Brotherhood in downtown Montreal is part of the program that was laid out by their ally, the Turkish Prime Minister, Recep Erdogan who declared a few years back: “The mosques are our barracks, the domes our helmets, the minarets our bayonets and the faithful our soldiers…”

* Phylllis Lambert is an architect and the founder of the Canadian Center For Architecture based in Montreal.
** Serge Joyal is a senator and a former minister in the Canadian government.