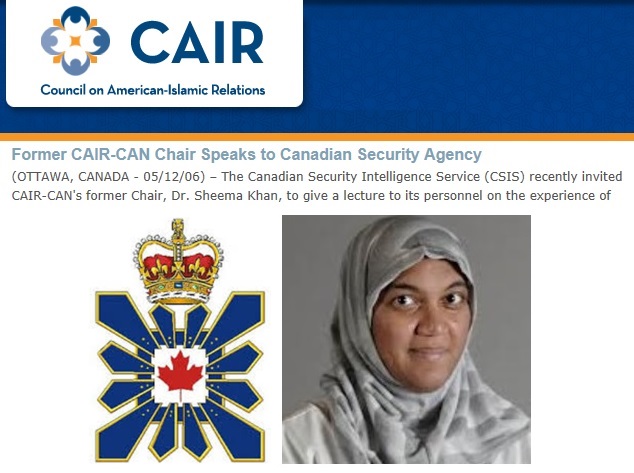 In September 2014, the Washington-based / Hamas-linked Council on American-Islamic Relations still had the report of the 2006 meeting between Sheema Khan and CSIS’s personnel on its website. The report is also reproduced below and a copy of Sheema Khan’s speech is on Archive.Today.

On April 11, 2006, Sheema Khan was invited to speak to the personnel of the Canadian Security Intelligence Service (CSIS), Canada’s primary national intelligence service. In 2006, shortly before and after her speech to CSIS’s personnel, and later in 2008, Khan was identified as CAIR-CAN Honorary Chair. At the time, John Dunn, CSIS Director General of Communications, presented CSIS’s invitation to Sheema Khan as part of a strategy to “build bridges with all communities in this new Canada.”

In her speech entitled Partners in Security, Sheema Khan aimed at convincing CSIS’s personnel that she and the Muslims she represents have a deep interest in the security of Canada against the terrorist threat. Sheema Khan told CSIS’s personnel that “Security agencies and citizens need to work together to ensure the safety of all Canadians. […] We truly are in this together.”

The day after Sheema Khan’s meeting with CSIS took place, a report was published by the Washington-based Council on American-Islamic Relations (CAIR). Sheema Khan was appointed to the board of Washington-based CAIR on August 7, 2000. CAIR was established in 1994 by three leaders of the Islamic Association for Palestine. In 2002, an American judge presiding over the case Holy Land Foundation for Relief and Development v. Ashcroft concluded that the “Islamic Association for Palestine (‘IAP’), has acted in support of Hamas.”

In 2009, in the case United States of America v. Holy Land Foundation for Relief and Development, Judge Jorge Solis stated that “The [U.S.] government has produced ample evidence to establish the associations of CAIR, ISNA and NAIT […] with Hamas.”

In 2000, Sheema Khan also founded CAIR-CAN, the Canadian branch of Washington-based CAIR and she chaired it until 2005, before being named its Honorary Chair. In 2013, when CAIR-CAN changed its name to become the National Council of Canadian Muslims (NCCM), Sheema Khan made a point of participating to the activities that were organized in Ottawa for the occasion.

For at least four years (2001-2005), Sheema Khan worked with Jamal Badawi at CAIR-CAN. While she was the organization’s Chair, Badawi was its most senior Director. In 2004, during Sheema Khan’s mandate at CAIR-CAN, the organization’s Executive Director presented Jamal Badawi to a Canadian Senate Committee as “perhaps one of the best North American Islamic scholars, if not the premier.” Jamal Badawi’s leadership role with CAIR-CAN (now NCCM) lasted at least from 2001 to 2013.

During an interview whose date is not specified but that was first archived by Web Archive in 2002, Badawi broached the political involvement of Muslims living in North America (Muslim participation in North American politics). In his interview, Badawi encouraged Muslims to take part in the various facets of political life.

In spite of the fact that many existing laws in North America are incompatible with Islamic law (sharia), Badawi encouraged Muslims to become judges in the non-Muslim societies they live in. He quoted Muslim scholar Ibn Taymiyya (1263-1328) to justify his position. Although Ibn Taymiyya is often referred to today for his justification of armed jihad, he nevertheless took into consideration that, in certain circumstances, violent methods are not the most effective to further the implementation of sharia in non-Muslim societies. Like the Islamists today, in his time Ibn Taymiyya took into account the situation on the ground and the weaknesses of his own side before establishing a strategy. That’s what led him to advocate that Muslims should become judges in non-Muslims societies in order to limit the scope of non-Islamic laws.

In his interview, Badawi said that judges who do not believe in sharia and fully apply non-Islamic laws “bring greater harm to people” than Muslim judges who use their own judicial discretion and do not apply provisions of existing laws that are opposed to sharia. In doing so, Badawi is purely and simply inciting Muslim judges currently on the bench in North America and those who will be there in the future to violate their code of ethics. Not fully applying the provisions of laws that are incompatible with sharia is only the first step before applying the sharia rules themselves, of course.

In his interview, Jamal Badawi also alluded to the leeway that a high-ranked civil servant had in pre-Islamic Egypt. The implication is clear: Jamal Badawi incites not only Muslim judges but also Muslim civil servants operating in governments not ruled by sharia to take advantage of their position and refrain from applying provisions of existing laws that are incompatible with Islamic law. Muslims hired as police officers, Crown prosecutors, immigration officers, income tax employees, school administrators, human rights Commissions members, and others, are all called upon by Jamal Badawi (“perhaps one of the best North American Islamic scholars, if not the premier,” according to the NCCM Executive Director in 2004) to give precedence to sharia over the laws they swore to apply.

Aside from his past involvement with CAIR-CAN / NCCM, a 1991 Muslim Brotherhood internal memorandum (point 20) established that Jamal Badawi is a leader of the North American Muslim Brotherhood infrastructure. His name also appeared in a 1992 Muslim Brotherhood leadership phonebook. Both documents were produced for evidentiary purposes in the 2008 Holy Land Foundation trial that led to the conviction of all those who were accused of terrorism financing. 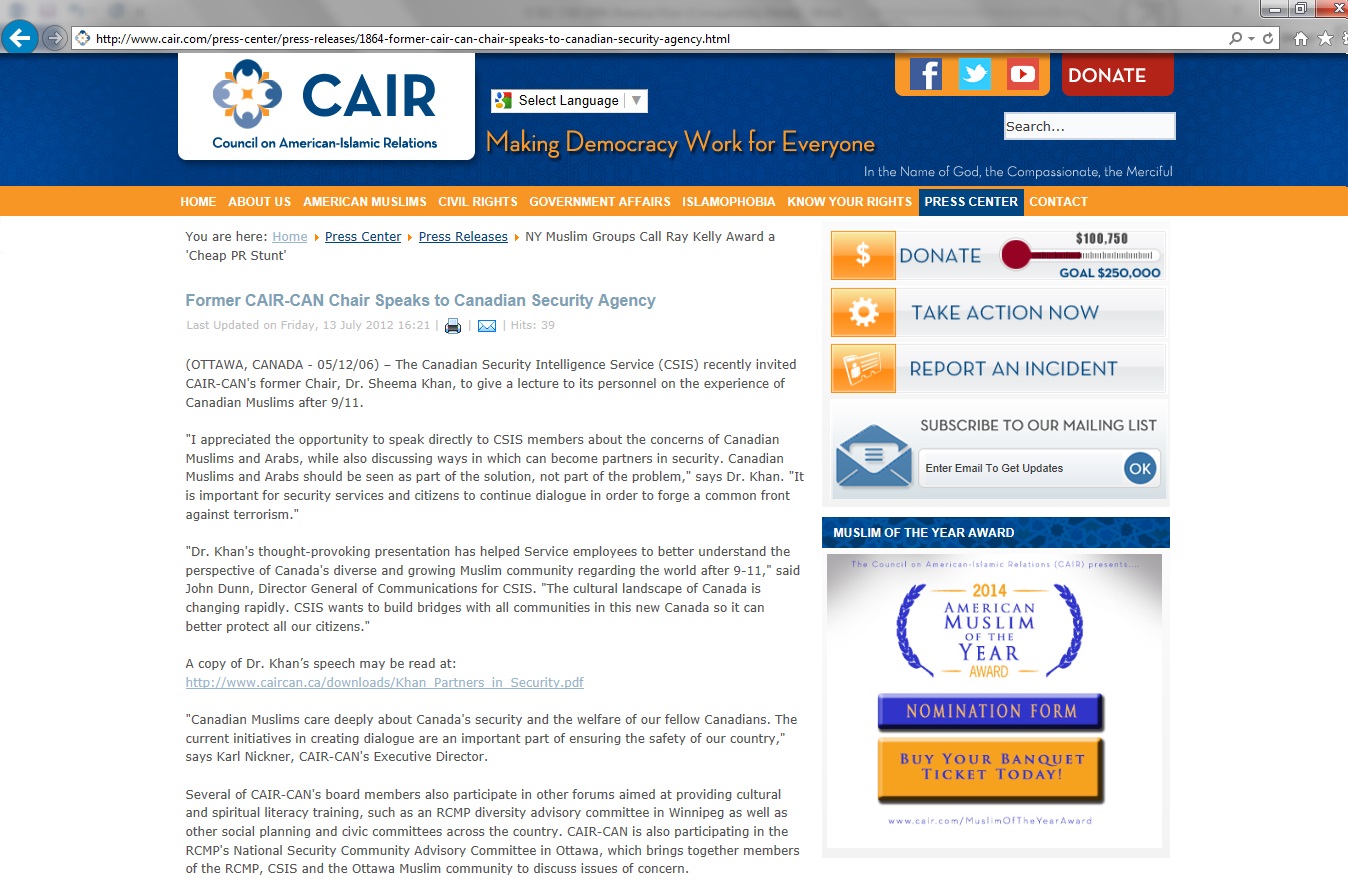