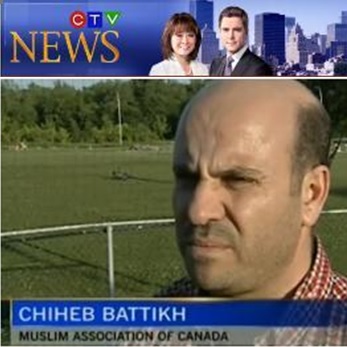 Last March, Chiheb Battikh was convicted to six years in jail for the kidnapping of a three-year-old child for a $500,000 ransom. The kidnapping occurred in Montreal on December 19, 2012. On that day, Battikh shot the father of the child with a Taser gun in the neck, on the ear and, finally, on his body. The father collapsed as blood was coming out of his ear.

Like a movie scene, the father managed to get back up, chased Battikh and intercepted him with the help of a passerby.

After Battikh’s arrest was made public, Point de Bascule came up with the scoop that he was a leader of the Muslim Association of Canada (MAC), the main Muslim Brotherhood organization in Canada. His preliminary inquiry revealed that he was being paid $4,000 a month to manage the Islamist organization’s activities. Battikh was head of MAC Education Department and director of the Canadian Institute of Islamic Civilization, a MAC substructure.

After Battikh’s arrest, Point de Bascule also published a report looking at the various Islamist organizations that the kidnapper led and managed in recent years. Battikh has had important financial responsibilities with some of these organizations: in 2005, while he was treasurer of the Mississauga’s Jamat-E-Islahul Muslemin mosque, it transferred $877,393 to the Muslim Association of Canada, Battikh was also responsible for the purchase of a prestigious $4.7 million building located at 615 Belmont Street in downtown Montreal.

Journalist Andrew McIntosh looked at the information that was made available during Battikh’s preliminary inquiry and investigated another related issue: the possibility that Battikh had an accomplice for the kidnapping. McIntosh did not come up with a firm conclusion but listed numerous hints that give a lot of credibility to this thesis. Very worrying is the fact that many hints highlighted by McIntosh were neglected by the Montreal police investigation. Andrew McIntosh’s findings were published by Le Journal de Montréal on June 20, 2014. 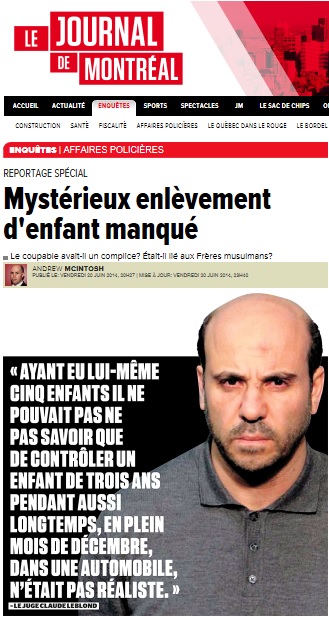 Faced with many inconsistencies at Chiheb Battikh’s bail hearing, Mr. Justice Claude Leblond brought up the idea that Battikh could have had an accomplice for the kidnapping. The judge could not conceive that Battikh could have handled, all by himself, the negotiations for the ransom while keeping the three-year-old child in his car in the middle of winter. The judge lacked information to conclude that Battikh had an accomplice but he was certain that Battikh withheld information: “Does this imply the presence of an accomplice? The tribunal cannot conclude so, but it believes that the accused has not told everything,” the judge said.

To support the thesis of an accomplice, Andrew McIntosh brought four main elements:

In his report, Andrew McIntosh also mentioned three issues that were neglected by Montreal police investigators. All of them could have been relevant to determine whether Chiheb Battikh had an accomplice or not:

A phone call from Saudi Arabia

While in police custody shortly after the kidnapping, Chiheb Battikh received a phone call informing him that his request for a visa had been approved for a trip in Saudi Arabia at the end of December 2012. This message was discovered by police seven months after it was placed. A police officer testified that he did not know why Battikh was planning to go to Saudi Arabia. The Muslim Association of Canada and Saudi Arabia have developed extensive links over the years: MAC received money from the Saudi terror-funding World Assembly of Muslim Youth in 2001 (Dar al-Iman was one of MAC’s alternate names back then) and in 2002; MAC’s travel agency (MAC Hajj) was officially endorsed by the Saudi embassy in Ottawa in 2010 and, in 2012 then MAC president Wael Haddara denounced the Canadian government for not being accommodating enough towards Saudi Arabia;

[Translation by Point de Bascule] Shameless, Chiheb Battikh, who is in jail since his arrest on December 19, 2012, still follows the daughter of a Quebec billionaire on his Twitter account, one of the most popular social networks.

During his incarceration, an inmate cannot access social networks with computers.

However, nothing stops family members – Battikh has a spouse and four grown-up children – to erase information on his Twitter account by getting his account’s password when they visit him in jail.

[..] Battikh has never been a big fan of Twitter. He opened his account in September 2009 and has only published 31 messages. He follows 10 persons and 32 are following him.

One week later, Andrew McIntosh informed his readers that somebody very close to Chiheb Battikh had modified his Twitter account and taken the name of the mother that he was following off his Twitter following list. 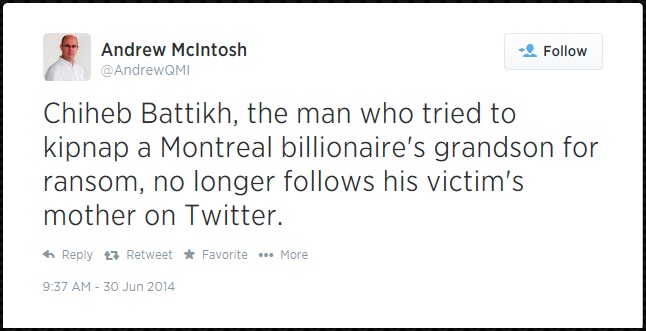 “Chiheb Battikh, the man who tried to kipnap [sic] a Montreal billionaire’s grandson for ransom, no longer follows his victim’s mother on Twitter.”