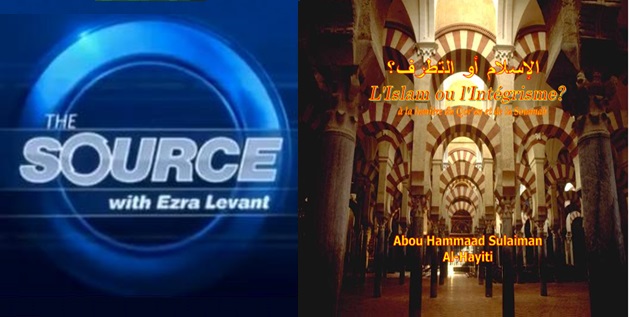 In mid-November 2014, shortly after U.S. aid worker Peter Kassig was beheaded in Syria, French media announced that his executioner could be French convert Maxime Hauchard. Shortly after, the French website Les InRocks published a profile of Hauchard indicating that “In January 2012, Hauchard shared a first video on his Facebook page entitled Where do you want to die? by [Montreal Imam] Suleiman Al-Hayiti. […] After that it seems that [Hauchard] published only sharia-related material [on his Facebook page].”

Point de Bascule Director was invited by Ezra Levant to talk about Montreal Imam Al-Hayiti given the fact that, in 2008, he tested the Canadian Human Rights Commission by lodging a complaint against this Imam for his writings hostile to Christians, Jews and homosexuals.

After his name was mentioned in relation with Hauchard’s radicalization, Imam Al-Hayiti denied on Twitter having any connection with Hauchard. However, numerous passages of his book Islam or Fundamentalism (L’Islam ou l’Intégrisme) are indistinguishable from what the Islamic State professes:

English translation: The word Jihad means “struggle.” But in the Islamic context, it implies armed struggle against non-believers in order to make Allah’s Word superior and establish it on earth, above all other religions, ideologies or systems. There are rules and conditions that applies for this worship, of course, such as having the strength and the ability, having the agreement of the Muslim leader, etc.

English translation: Women who are taken prisoners during Jihad against the kuffar [non-Muslims / plural of kafir] become the slaves of the Muslims, and whoever possesses one of them may have sexual intercourse with her and sell her.

English translation: If it is feasible, it is compulsory to fight those who have refused to accept Islam until they finally accept it or until they pay the jizya [a special tax imposed on Christians and Jews mentioned in verse 9:29]. Because their happiness on earth and their salvation in the hereafter is within Islam. This is why forcing human beings to accept the truth that contains guidance and happiness is better for them than falsehood.

English translation: How the non-Muslim leader of a country should be treated depends on the prevailing circumstances. If Muslims are strong enough and have the capacity to fight and remove him from power, and replace him with a Muslim leader, then it is compulsory to do so. This is part of Jihad for the sake of Allah. On the other hand, if [Muslims] are unable to remove this non-Muslim leader from power, they are not allowed to spread Fitnah [dissension, civil strife]) with non-Muslim and unjust leaders because it will end up harming Muslims.

In February 2006, Calgary Imam Syed Soharwardy lodged a complaint at the Alberta Human Rights Commission (AHRC) after the Alberta-based Western Standard, republished the Muhammad cartoons that had appeared in a Danish newspaper and ignited violent protests and death threats from Muslims around the world. The AHRC accepted to examine the complaint. According to Ezra Levant, the then publisher of the Western Standard, he had to spend tens of thousands of dollars battling the complaint. Contrary to defamation suits, there was no cost for the complainant given that he did not have to hire a lawyer to defend his allegations in Court since Human Rights Commissions take on themselves to investigate.

In early December 2007, the Canadian Islamic Congress (CIC) lodged three complaints against Maclean’s magazine for having published an excerpt of Mark Steyn’s book America Alone: The end of the world as we know it. The Canadian Human Rights Commission (CHRC) and two provincial Commissions all accepted to examine the complaints. The excerpt reproduced by Maclean’s was entitled The future belongs to Islam (also Archive.Today). Steyn’s thesis was that “The Muslim world has youth, numbers and global ambitions [while the] West is growing old and enfeebled, and lacks the will to rebuff those who would supplant it.” According to the CIC’s complaint, by expressing his opinions and beliefs, Mark Steyn “subject[ed] Canadian Muslims to hatred and Islamophobia.”

In spite of the fact that CIC’s complaints were rejected by all three Human Rights Commissions, CIC’s representative Khurrum Awan, expressed his satisfaction for the outcome to the Canadian Arab News (also Archive.Today): “‘We do not plan to appeal the decision because we attained our strategic objective — to increase the cost of publishing anti-Islamic material.” According to Awan, Maclean’s spent $500,000 on the B.C. case alone and its total legal cost was somewhere around $2 million.

Seeing that complaints to Human Rights Commission had become another tool in the hands of Islamists to intimidate their critics at no cost for them, in April 2008 Point de Bascule took the decision to test the Canadian Human Rights Commission. Would it accept to examine a complaint against Imam Al-Hayiti who advocates (page 240) the killing of Jews and Christians who refuse to pay the special tax imposed on them by Islamic law (sharia)? Would a call to Allah by Imam Al-Hayiti (page 184) asking to “curse and destroy [gays and lesbians] in this life and the next” be considered hate speech?

The answer was no. The Canadian Human Rights Commission refused to examine the complaint and it explained its motives in a letter sent by Stéphane Brisson on December 5, 2008:

[…] the majority of the references in “L’Islam ou l’Intégrisme [Islam or Fundamentalism] are to “infidels”, “miscreants” or “Western women”. These are general, broad and diversified categories that do not constitute an “identifiable group” under Section 13 of the Act. As we have also mentioned, the extracts that identify groups on the basis of prohibited grounds of discrimination (homosexuals, lesbians, Christians, Jews) do not seem to promote “hatred” or “contempt” according to the criteria set forth in the Taylor case. Therefore, the document on which the complaint is based does not seem to meet the requirements of Section 13 of the Act for a complaint.

At the time, the National Post editorial board published a comment entitled The overt bias of Canada’s CHRC thought police about the CHRC’s decision:

This [decision] is part of a pattern that has revealed itself over the last few years. Human rights commissions claim to be agencies that fight “hate” generically. But in fact, they are interested in a very narrow sub-category of alleged hatemonger — the right-winger accused of homophobia, anti-Muslim bias or some other thought crime.