UPDATE – After being deported to the U.S. from Pakistan, former MSA Manitoba leader Al Farekh appears in a New York court to face terrorism charges 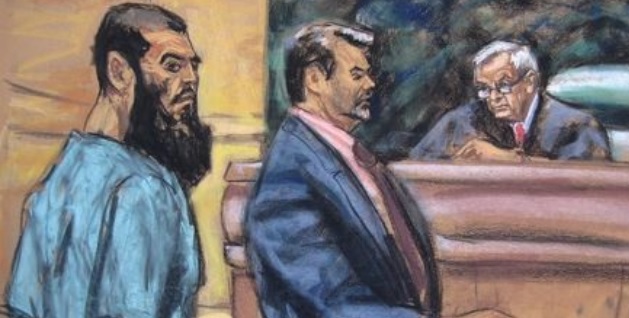 Two other individuals went with Muhanad Mahmoud Al Farekh to train with Al Qaeda in Pakistan in 2007. All three were former leaders of the Muslim Students Association at the University of Manitoba. Al Farekh and Maiwand Yar are identified as such on the MSA Manitoba 2005-2006 Executive Body webpage. In 2010, the third individual, Ferid Imam, was identified as a former MSA Manitoba president by another former president of the association, Shariq Kidwai, in the Winnipeg Free Press / WebArchive – Archive.Today.

A U.S. citizen accused of training with al Qaeda and conspiring to kill Americans abroad appeared in federal court in New York on Thursday to face terrorism charges.

Muhanad Mahmoud Al Farekh, who was detained in Pakistan and recently transferred into U.S. custody, was clad in blue jail garb and sporting short brown hair and a long beard as he made a brief court appearance in Brooklyn.

His court-appointed lawyer, Sean Maher, made no request for bail and did not enter a plea on Farekh’s behalf but asked that he be given medical attention while detained.

In a complaint filed in court earlier, prosecutors said Farekh was charged with conspiracy to provide material support to terrorists.

The Justice Department said in a statement that Farekh had been deported from Pakistan to the United States and arrested on a pending warrant that was unsealed on Thursday.

The complaint said that Farekh, who was born in Texas, had conspired with others to provide personnel to be used by al Qaeda in support of efforts to kill American citizens and members of the U.S. military abroad.

The document said that in or around 2007, Farekh, a man named Ferid Imam and a third unnamed individual, all of whom were students at the University of Manitoba in Winnipeg, Canada, decided to leave school and travel to tribal areas along Pakistan’s border with Afghanistan to train with al Qaeda.

According to the Justice Department, in September 2008 Ferid Imam also provided military-style training at an al Qaeda camp in Pakistan to Najibullah Zazi and two other men later convicted of plotting a suicide bombing of the New York City subway system.

The complaint says two cooperating witnesses who provided U.S. investigators with evidence against Farekh had been involved in the subway attack plot.

The document said that before leaving for Pakistan, Farekh and his alleged co-conspirators frequently viewed videos promoting violent jihad, including online lectures by Anwar Al-Awlaki, the U.S.-born, Yemen-based militant preacher affiliated with al Qaeda in the Arabian Peninsula who was killed in a U.S. drone attack in 2011.

A federal law enforcement official said that in the last two years, the Justice Department’s National Security division has filed criminal charges against more than 30 individuals – most of them U.S. citizens or residents – for providing support to terrorists.

In a separate case, also in New York on Thursday, two women were arrested in an alleged conspiracy to build a bomb and wage a “terrorist attack” in the United States.

A federal criminal complaint said the women, both U.S. citizens and alleged al Qaeda and Islamic State sympathizers, devised a plot to target police, government or military targets based on their “violent jihadi beliefs.” (Additional reporting Mark Hosenball and Emily Stephenson in Washington)

Hussein Hamdani (MSA National – 1996): Islamization of campus politics and the politicization of the MSA (Hussein Hamdani wrote his guide for MSA National while being an MSA leader at McMaster University. He later became an MSA leader at the University of Western Ontario, and is currently a member of the Cross-Cultural Roundtable advising Public Safety Canada and the Department of Justice on security matters.

MSA National (June 4, 1997): Siraj Wahhaj leads a 1-month long Islamist retreat in Winnipeg (The event was sponsored by MSA National and organized by Shahina Siddiqui, who is currently advising the RCMP on security matters.)