REBEL VIDEO – Omar Alghabra led an organization that opposed the designation of Hamas as a terrorist organization, he supported sharia law for Ontario and now he has been appointed Parliamentary Secretary to the Minister of Foreign Affairs 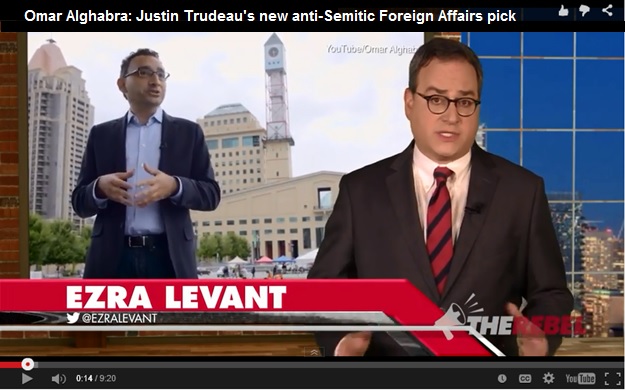 http://www.therebel.media/omar_alghabra_justin_trudeau_foreign_affairs
Click on the image to view the video

On December 8, after Omar Alghabra was appointed Parliamentary Secretary to the Minister of Foreign Affairs Stéphane Dion, Ezra Levant dedicated a portion of his daily show on TheRebel.media to past positions taken by Omar Alghabra. Click on the image above to view the video.

The Department of Foreign Affairs has been renamed Global Affairs Canada at the beginning of this Liberal mandate. Alghabra has already been a Member of Parliament in the past (2006-2008). Omar Alghabra was born in Saudi Arabia in 1969 of Syrian parents and he migrated to Canada in 1989.

Here is a short chronology including the facts brought up by Ezra Levant that demonstrates why Omar Alghabra’s past positions are incompatible with his new role as deputy to the Minister of Foreign Affairs.

According to the Government of Canada, “Since 1990, Hamas has been responsible for several hundred terrorist attacks against both civilian and military targets. Hamas has been one of the primary groups involved in suicide bombings aimed at Israelis.”

For example, on August 9, 2001, 15 civilians were killed, including 7 children and a pregnant woman, and 130 wounded in a suicide operation in a Jerusalem pizzeria claimed by Hamas.

Youssef Qaradawi: “The martyr operation is the greatest of all sorts of jihad in the cause of Allah. A martyr operation is carried out by a person who sacrifices himself, deeming his life [of] less value than striving in the cause of Allah. […] But a clear distinction has to be made here between martyrdom and suicide. Suicide is an act or instance of killing oneself intentionally out of despair, and finding no outlet except putting an end to one’s life. On the other hand, martyrdom is a heroic act of choosing to suffer death in the cause of Allah, and that’s why it’s considered by most Muslim scholars as one of the greatest forms of jihad.”
Source: IslamOnLine / Archive.Today

Already on February 4, 1949, while the Muslim Brotherhood was under the leadership of Hassan Al-Banna, the New York Times reported that “the terrorist Moslem Brotherhood in Egypt has formed a suicide squad of 200 men, each sworn to give his life to the cause in some venture such as the assassination of [Egypt’s] Premier Mahmoud Fahmy Nokrashy Pasha.” Egypt’s Premier Pasha was killed by a veterinary student member of the Muslim Brotherhood on December 29, 1948. This suicide squadron was a model that inspired Hamas to organize its own suicide operations many years later and launch attacks not in Egypt, but at the heart of Israel this time.

According to the Hamas’s Charter (Article 7), “The hour of judgment shall not come until the Muslims fight the Jews and kill them.” The Charter quotes the hadith collections of Bukhari and Muslim claiming that, on the hour of judgement, “the Jews [will] hide behind trees and stones, and each tree and stone will say: ‘Oh Muslim, oh servant of Allah, there is a Jew behind me, come and kill him’.”

DECEMBER 9, 2002 – The Canadian Arab Federation (CAF) issued a press release entitled Listing of terrorist organizations must be put in perspective which opposes the designation of Hamas and Palestinian Islamic Jihad as terrorist entities by the Government of Canada. Omar Alghabra became CAF President only in 2004 but the 2002 CAF position on Hamas remains on the organization’s website to this day (December 2015).

APRIL 2, 2003 – The Government of Canada listed the Al-Aqsa Martyrs’ Brigade as a terrorist organization.

SEPTEMBER 17, 2004 – On September 17, 2004, Omar Alghabra complained that three days earlier, the National Post had reported about the Al-Aqsa Brigade by identifying it as a “terrorist group.”

More than a year earlier, the group had been designated a “terrorist entity” by the Government of Canada.

JUNE 2, 2005 – Then CAF president Omar Alghabra sent a letter to Toronto Police Chief, Bill Blair, to oppose his decision to lead a “Walk with Israel” in Toronto:

Omar Alghabra: “This event coupled with your recent participation in a delegation of police chiefs that went on a six-day trip to Israel on March 1, has begun to create a feeling of genuine distrust and confusion for what appears to be your public endorsement of the practices of the state of Israel.”

Omar Alghabra and former Police Chief Blair were both elected for the Liberal Party on October 19, 2015.

DECEMBER 14, 2005 – Omar Alghabra expressed his support for the introduction of sharia law in family matters in Ontario in an interview given to the Al Mughtarib Arabic newspaper.

Omar Alghabra: “Unfortunately, the majority of [Canadian] Muslims remained silent during the research of this law and abandoned the field to a dissenting minority [of Muslims] which had a louder voice. As a result, this plan ended in failure. The problem was not a stand taken [by non-Muslims] against Muslims, but it was we [Muslims] who were divided among ourselves and disunited in our ranks.”

Daniel Pipes has been updating a chronology on Omar Alghabra since 2005. After he alluded to the statement made by Alghabra to the Al Mughtarib in 2005, the editor of this Arabic newspaper told Pipes on December 6, 2006 that it was a lie. The article was not on the newspaper’s website but Daniel Pipes replied to the editor that he had archived a reproduction of the article on his own website for more than a year.

However, an opening statement in the Hamas Charter (1988) which quotes the founder of the Muslim Brotherhood, Hassan Al-Banna, is quite explicit: “Israel will exist, and will continue to exist, until Islam abolishes it, as it abolished that which was before it.”

More recently in 2014, Reuters reported that a top Hamas leader vowed Israel’s destruction during a Hamas military parade in Gaza:

JANUARY 28 AND 30, 2009 – Hamas’s mentor Youssef Qaradawi described on Al Jazeera the genocide of Jews organized by Hitler as “the last punishment” imposed by Allah upon the Jews and he expressed his hope to “seal [his own] life with martyrdom” by killing Jews “even if in a wheelchair.”

MARCH 18, 2009 – The Department of Citizenship and Immigration Canada notifies then CAF President Khaled Mouammar that the government has decided to cut the funding to his organization:

As you are also aware, serious concerns have arisen with respect to certain public statements that have been made by yourself or other officials of the CAF. These statements have included the promotion of hatred, anti-semitism [sic] and support for the banned terrorist organizations Hamas and Hezbollah.

The objectionable nature of these public statements – in that they appear to reflect the CAF’s evident support for terrorist organizations and positions on its part which are arguably anti-Semitic – raises serious questions about the integrity of your organization and has undermined the Government’s confidence in the CAF as an appropriate partner for the delivery of settlement services to newcomers.

Source: This excerpt is quoted in Section 2 of the case Canadian Arab Federation v. Canada (Citizenship and Immigration), 2013 FC 1283.

In an interview granted by Omar Alghabra to Wafaa Hasan on September 7, 2009, there is also a general reference to funds being cut to the Canadian Arab Federation.

Source: The Casting Out of the Canadian Arab Federation / WebArchive – Archive.Today (See p. 28)

JULY 16, 2013 – Hamas threatened to launch terrorist attacks in countries where Israel’s embassies are located. Canada is among the potential targets, of course.

DECEMBER 23, 2013 – The Federal Court Justice Russel Zinn decided that, based on the Ministry’s evidence, “CAF appears to support organizations that Canada has declared to be terrorist organizations and which are arguably anti-Semitic.”

JULY 24, 2015 – The Federal Appeal Court rejected CAF claims that Kenney’s decision to cancel its funding was an “abuse of authority” or “a blatant attempt to suppress criticism of Israel.”

Sources: Statement by the Prime Minister of Canada on the appointment of Parliamentary Secretaries / WebArchive – Archive.Today ALSO Biographies of the appointees

Announcement by the Department of Foreign Affairs / WebArchive – Archive.Today

Reaction of the Minister of Foreign Affairs Stéphane Dion on Twitter / Archive.Today 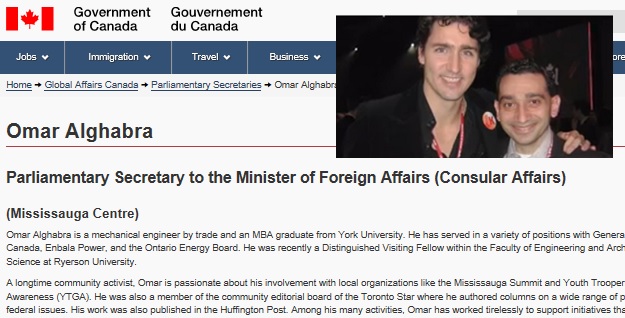 http://www.international.gc.ca/gac-amc/alghabra.aspx?lang=eng / WebArchive – Archive.Today
Click on the image to view the announcement on the Government of Canada’s website