The Muslim Association of Canada (MAC), a non-profit organization affiliated with the Muslim Brotherhood that, according to Meili Faille (Bloc Québécois MP), maintains a permanent presence on Parliament Hill, will hold a conference entitled The Rise of Islamophobia: A Rational Approach to Irrational Fears 1 in Ottawa on November 7th. Pannelists linked to the Muslims Brotherhood will discuss their perception of the rise of islamophobia in the West at the request of the Youth division of the MAC. The organizers refer to “the Hijab ban in France; faith-based arbitration, faith-based schools; Hérouxville; the banning of minarets in Switzerland; the niqab debate; Tariq Ramadan’s visit; NYC ground zero mosque; banning of Imam Zijad Delic” as evidence that the West is becoming increasingly Islamophobic. The organization will examine the best way to interpret these events and to manage them constructively, taking for granted that the diagnosis of islamophobia is the correct one.

The concept of islamophobia was developed in the 1980s by Islamists as they attempted to delegitimize all criticism of their political project by lumping it together with an irrational hatred of all Muslims. This confusion between islamophobia and the criticism of the ideology adopted by Islamists and the Muslim Brotherhood is a strategy designed to silence all opposition to this totalitarian movement. The most vocal critics of Islamism – and especially of the Muslim Brotherhood – are Muslims themselves, as demonstrated during the last three of Tariq Ramadan’s visits to Montreal, as well as by the recent cancellation of Imam Delic’s speech at the Canadian Department of National Defence.

– Imam Zijad Delic: Executive Director of the Canadian Islamic Congress (CIC), a radical organization that anchors its political agenda to that of the Organization of the Islamic Conference (OIC). The OIC campaigns worldwide for the redefinition of Human Rights in accordance to those adopted by the Islamic Human Rights Declaration of 1981. The OIC supports segregation between men and women, rejects freedom of conscience, and promotes a return to Blasphemy laws that would facilitate the censorship of all criticism of Islamism.

Delic takes the helm of the CIC in 2006. In 2007, the CIC condemns the Canadian government for voting against an anti-defamation resolution aiming to criminalize the public slander of religion proposed by the OIC at the UN. Also in 2007, the CIC holds a fundraiser in honor of Yvonne Ridley, the British journalist captured by the Taliban and a convert to Islam, whose pronounced radicalism gets her fired from English-language Al-Jazeera in 2003 before being recycled by the Iranian Regime via Press TV. In 2008, The CIC files multiple complaints of islamophobia with federal and provincial Human Rights Commissions against Maclean’s and journalist Mark Steyn. In 2010, Delic holds a conference with Zafer Bangash, who, in his magazine Crescent International, favors the worldwide spread of the Iranian Islamic Revolution and supports the ideology of the Muslim Brotherhood. Recently, after being disinvited from speaking at Canada’s National Defence headquarters in October 2010, Delic was also committed to be the event’s moderator for the “Just and Sustainable Peace” conference featuring Iranian professors closely tied to the Islamic Republic’s regime. The list of speakers was considered so extreme, that the RCMP was orded away from the conference and even drew a rebuke from the Green Party leader.

– Maher Arar: Known in Canada for his deportation by the United States to Syria and his subsequent imprisonment in 2002-2003, which led to the commission of inquiry that bears his name. The Canadian Government awarded him a settlement of $10.5 million in January of 2007. He has also benefitted from the support of organizations connected with the Muslim Brotherhood such as CAIR-CAN and the Islamist organization CIC. Despite the Canadian court ruling, the United States government has not exonerated Arar and, on the contrary, has made public statements to state their belief that Arar is affiliated with members of organizations they describe as terrorist. One year ago today, on November 2nd 2009, the 2nd Circuit United States Court of Appeals, in a 7-4 decision, upholds the ruling by the district court. In June of 2010, the U.S. Supreme Court rejected Maher Arar’s petition for a writ of certiorari, ending his bid to hold officials accountable for his transfer to Syria.

– Sheema Khan: Founder and former Chair of the Canadian branch of the Council on American-Islamic Relations (CAIR). CAIR an organization that is a part of the North American network of the Muslim Brotherhood and that was designated ‘unindicted co-conspirator‘ by the American government for having funded terrorist activities in the Middle-East from the United States. While she was Chair in 2003, Khan made a statement under oath that clearly revealed that CAIR-CAN was under the control of CAIR-USA, a claim that she and her successors have continued to deny routinely.

– Ehab El-Komy: Member of the executive board of the MAC and also one of the imams in service at the Gatineau Mosque, which is managed by Salah Basalamah a co-founder with Tariq Ramadan of Présence musulmane (Muslim Presence) which is also known to be tied to the movement and the ideology of the Muslim Brotherhood. El-Komy also heads an Ottawa base security firm, Trilex Security.

On its website, the youth division of the Ottawa MAC presents writings by radical ideologues of the Muslim Brotherhood, such as Sayid Qutb, who asserted that jihad was not just a means to defend Muslim lands and peoples but an offensive, proactive, and permanent revolution against internal and external enemies who usurped God’s sovereignty.

The Ottawa youth division of the MAC also organized summer camps for the Islamic Community Center of Brossard. One of the three alleged terrorists arrested this past August was raised on the South Shore of Montreal suburb and also attended the mosque and Islamic center of Brossard. He also successfully received a degree from McGill, has a family and a medical practice.

The conference claims to take a “Rational Approach to Irrational Fears”.  In order to address the perception of a rising tide of islamophobia in Québec and Canada, Point de Bascule propose a rational approach by introducing a comprehensive nationwide program in mosques and Islamic centers to teach against the ideas of jihad and Islamic supremacism.

Opposing Hassan al-Banna and the Muslim Brotherhood Is Not Some Kind of Racism.

1- Screenshot of the Internet page presenting the conference: 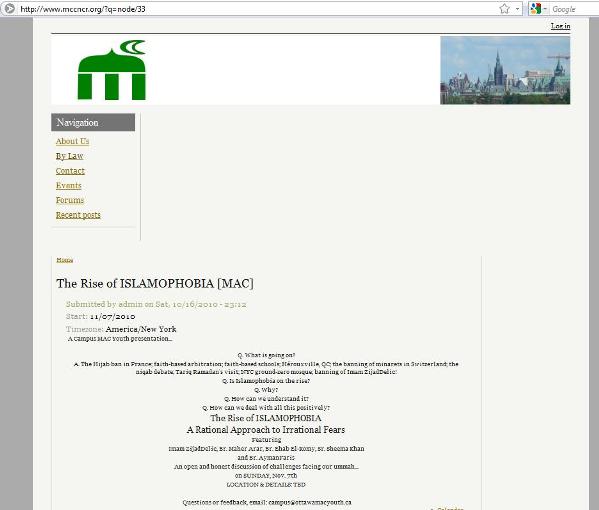