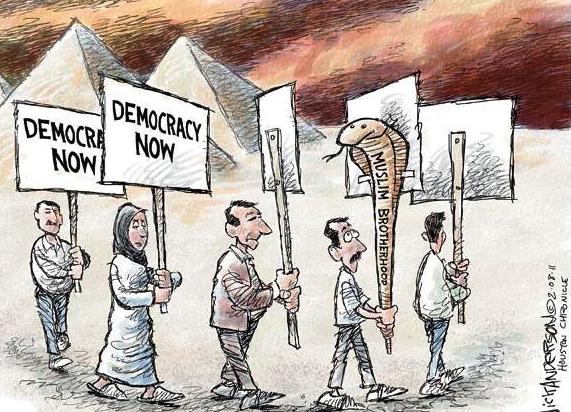 “(Some people fear) that democracy makes the people a source of power and even legislation, although legislation is Allah’s alone … These fears can be overcome by one article stipulating that any legislation contradicting the incontestable provisions of Islam shall be null and void because Islam is the religion of the State.”
– Youssef Qaradawi

On September 7, 2011, the Dalai Lama, Tariq Ramadan and other personalities are scheduled to speak at the Second Global Conference on World’s Religions after 9/11. The conference will take place in Montreal and it is sponsored by McGill University, the Université de Montréal and other organizations. Interfaith dialogue is one of the most effective methods known to the Muslim Brotherhood for waging ideological jihad in the West.

Point de Bascule takes this opportunity to examine some of Tariq Ramadan’s ideas. The following text is an excerpt of an article to be published in the coming days.

Rachid Ghannouchi, Youssef Qaradawi and Tariq Ramadan have all publicly condoned democracy. We should add “as long as they agree with the result of the vote”.

Youssef Qaradawi has clearly expressed what the Muslim Brotherhood understands by democracy in a section of his book Priorities entitled The Movement and Political Freedom and Democracy:

(Some people fear) that democracy makes the people a source of power and even legislation, although legislation is Allah’s alone.

(…) These fears can be overcome by one article stipulating that any legislation contradicting the incontestable provisions of Islam shall be null and void because Islam is the religion of the State and the source of legitimacy of all its institutions and therefore may not be contradicted, as a branch may not run against the main stream.

Tariq Ramadan is closely associated with a Malian organization that threatened to resort to violence in order to stop a reform of the Malian Family code to be implemented even though it was adopted (p. 8) by an overwhelming majority of parliamentarians on August 3, 2009 (117 yes – 5 no – 4 abstentions).

The new Family code replaced the notion of obedience of a wife to her husband by the notion of respect between spouses, it nullified a marriage to which both parties have not agreed, it substituted the notion of “parental authority” to that of “paternal authority”, it set the minimum legal age for girls to marry at 18, it granted women greater inheritance rights than those stipulated by sharia, etc.

Opponents called the new code “the work of the devil.” The Malian High Islamic Council (HIC) organised demonstrations, threatened to use violence and convened Malian religious leaders at the main mosque in Bamako to denounce the elected officials who had supported the new code. Face with these threats of violence by the HIC, the Malian president refused to sign the bill into law.

The HIC, the key organization behind the protests against the new Family code, is closely associated with Tariq Ramadan and his organisation Muslim Presence. Ramadan and the HIC general secretary Mamadou Diamouténé were amongst the main speakers at a 2010 CIMEF conference in Mali. CIMEF is identified as a component of the Muslim Presence network headed by Tariq Ramadan (click on Africa). The Malian Family code was discussed during the 2010 conference. It was simply an occasion for Ramadan and his partners to celebrate their victory of 2009. At the end of the conference, Ramadan and the Malian leader were chosen to plan the next CIMEF meeting scheduled for 2012 in Senegal.

Deception is an integral part of Tariq Ramadan’s ideological jihad. His pledges in favour of democracy should be judged by his actions and not by his words.

Strictly speaking democracy is the rule of the majority. This has led defenders of individual freedoms to add a caveat when they defend the concept of democracy. They specify that, in a free society, a vote by a majority should be required to settle a very limited number of issues. The level of freedom of a society is determined by the proportion of issues that an individual may decide by himself, for himself, without having to wait for the authorization of a majority. In a free society, the vast majority of issues confronting the citizens should belong to the private sphere and therefore should not be submitted to the vote of a majority.

This is precisely where sharia conflicts with the classical liberal definition of democracy. Sharia has a specific rule on the smallest details of life. Hassan al-Banna’s 50-point manifesto clearly indicates where sharia leads. The manifesto is the product of a “totalitarian” ideology. It aims at regulating the citizen’s life “in its totality”. All aspects of the various fields of human activity are concerned: political, judicial, administrative, social, educational and economic.

Al-Banna’s manifesto promotes the abolition of political parties and the establishment of a single party system, the modification of the laws so that they conform to sharia, the multiplication of associations promoting the spirit of jihad in the youth, the closing of dance halls, the censorship of movies and plays, the imposition of a dress code on the population, etc.

“The democrat” Tariq Ramadan knows full well about the 50-point manifesto. He alluded to it in a biography of his grandfather (video 2:25 – in French). Ramadan has already warned us: “I have studied Hassan Al-Banna’s ideas with great care and there is nothing in this heritage that I reject.”

The 50-point manifesto was originally submitted by Hassan al-Banna to various Arab leaders in 1947. He was then trying to convince them to use their respective State, the power of their police to implement it.

When the theory of fascism was developed, the word “totalitarian” was used in a positive fashion by Italian fascists to describe their own ideology. They simply meant that that their ideology, like sharia, aimed at controlling all aspects of life. Eventually the word acquired a negative connotation. It became mainly used by the opponents of fascism (and later of communism). The proponents of fascism eventually stopped using it to describe their ideology in a positive way.

Islam invests in the social field and influences it in a notable fashion. In fact, it is necessary to go beyond what is specifically religious and add to it the lifestyle, the civilization and the culture. This all-encompassing character is one characteristic of Islam.

A democracy respectful of individual rights cannot simply be defined by the rule of the majority or the possibility of electing one’s political leaders. If it was so, then Hitler should be considered a democrat since he took power without a coup d’État by legally taking advantage of the parliamentary procedures.

Hassan al-Banna lauded Hitler’s leadership qualities. According to him, Hitler was a man who proved that an inspired leader could reach “success and fortune” (sic) in spite of his modest beginnings. (To What Do We Invite Humanity?)

In his book Priorities, Youssef Qaradawi conveys his Muslim Brotherhood supporters to infiltrate Western political parties. His goal is nothing less than the repetition of Hitler’s successes. (The Difficulty of Practice in Real Life)

The Ikhwan (the Muslim Brotherhood) must understand that their work in America is kind of a grand Jihad in eliminating and destroying the Western civilization from within and sabotaging its miserable house … so that it is eliminated and God’s religion is made victorious over all other religions. (1991 Muslim Brotherhood internal memorandum)