Tariq Ramadan on Iranian TV 3OF3 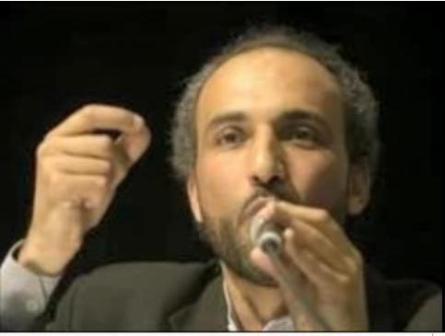 This is the last of three articles about Tariq Ramadan by Marc Lebuis and Étienne Harvey of the Quebec-based Point de Bascule. You can access the first two articles on clicking on Part 1 and Part 2

Tariq Ramadan’s current speaking tour of North America has met with widespread enthusiasm from the media and from appeasers of Islam in all walks of life.In Montreal, however, the blog Point de Bascule (Tipping Point) organized a press conference featuring several powerful speakers with Muslim backgrounds who offered a picture of Ramadan that is based in facts and that contrasts dramatically with the benign image offered by the mainstream press. This is the first in a series of three articles in which Marc Lebuis and Étienne Harvey of Point de Bascule offer a definitive account of who Ramadan really is and what he really stands for, as demonstrated by his own words and those of the Islamic scholars he most admires.

The Iranian government has participated in the Muslim Brotherhood’s effort to “destroy…Western civilization from within” by sponsoring a TV series hosted by Tariq Ramadan and targeting English-speaking viewers around the world since April 2008. Produced in London, the show Islam and Life is broadcast on the Iranian government-run network Press TV.

One need only watch a few shows to realize how incompatible the version of the religion preached by Ramadan to his English-speaking viewers is with the conclusions of the scholars whom he invoked and with the speeches of other Muslim Brotherhood leaders when they address Muslim crowds. This is precisely the purpose of an ideological jihad: to disarm intellectually the people that are being targeted by the Islamists. The January 14, 2010, program, dealing with the issue of war and peace in Islam, provides a good example of Ramadan’s technique. At this writing, the show was still available on the Iranian site Press TV.ir.

At 8:42 into the show, after an exchange with his guest Ashur Shamis, Tariq Ramadan concluded as follows: “The principles (of Islam) are exactly what you are saying : that it’s on the defensive, it’s resisting aggression, it’s not to launch war (but) to spread peace around.” This legend that Islam does allow strictly defensive wars is invalidated by the remarks made by Ramadan’s scholars that were quoted in the first article of this series.

Sayyid Qutb (1906-1966), one of the Muslim Brotherhood’s most important ideologues, has written the following on the idea that jihad could be exclusively defensive:

“As to persons who attempt to defend the concept of Islamic Jihaad (sic) by interpreting it in the narrow sense of the current concept of defensive war, and who do research to prove that the battles fought in Islamic Jihaad (sic) were all for the defense (sic) of the homeland of Islam… against the aggression of neighbouring powers, they lack understanding of the nature of Islam and its primary aim. Such an attempt is nothing but a product of a mind defeated by the present difficult conditions and by the attacks of the treacherous orientalists on the Islamic Jihaad (sic). …It would be naive to assume that a call is raised to free the whole of humankind throughout the earth, and it is confined to preaching and exposition.” (Sayyid Qutb, Milestones, pp. 112-113 [complete text available on youngmuslims.ca, Use the expression “As to persons” as a key to rapidly locate the excerpt in the text])

As noted, Sayyid Qutb is one of the main ideologues of the reformist salafist trend identified by Tariq Ramadan. The salafists frequently cite actions by Islam’s founder to substantiate their assertions. In order to invalidate the concept of an exclusively defensive jihad, Qutb recalled that Muhammad himself waged offensive jihad and he offered the battle of Badr (624) as an example:

“During Ramadan of the same year (624), the Battle of Badr took place, and in Chapter Anfal this battle was reviewed (Surah 8 – The Spoils). If this stage of the Islamic movement is viewed in proper perspective, then there is no room to say that the basic aim of the Islamic movement was ‘defensive’ in the narrow sense which some people ascribe to it today.”

– Sayyid Qutb, Milestones, Damascus, The Holy Koran Publishing House, 1978, p. 124 (Complete text available on youngmuslims.ca, Use the expression “Badr” as a key to rapidly locate the excerpt in the text)

Ibn Taymiyya, another of Ramadan’s scholars, adopted the same technique and gave the example of the raid in Tabuk (630) when he explained what an offensive jihad was:

“(Offensive jihad) is voluntary fighting in order to propagate the religion, to make it triumph and to intimidate the enemy, such as was the case with the expedition to Tabuk and the like.”

At 9:34 in his January 14, 2010, show, Ramadan agreed with his guest who stated that in wartime, Islam has always showed magnanimity, protecting women, children, crops and trees.

This, again, is smoke and mirrors for the purpose of ideological jihad. On this specific issue, Ramadan is contradicted by the scholar al-Ghazali (1058 – 1111), whose work Ramadan described as “decisive” for Islam and the West in his book What I Believe, (New York, Oxford University Press, 2010, pp. 83-84).

“One must go on jihad (i.e., warlike razzias or raids) at least once a year…. One may use a catapult against them (non-Muslims) when they are in a fortress, even if among them there are women and children. One may set fire to them and/or drown them…. If a person of the Ahl al-Kitab [People of The Book – Jews and Christians, typically] is enslaved, his marriage is [automatically] revoked….One may cut down their trees…. One must destroy their useless books. Jihadists may take as booty whatever they decide…. they may steal as much food as they need.”

At 9:58 of the same TV show, Tariq Ramadan stated that Islam forbids the destruction of religious symbols in wartime. This is obviously false. Hassan al-Banna himself pointed out to the contrary in his explanation of jihad:

“Jihad in its literal significance means to put forth one’s maximal effort in word and deed; in the Sacred Law (sharia) it is the slaying of the unbelievers, and related connotations such as beating them, plundering their wealth, destroying their shrines, and smashing their idols.”

Even when the opponents of the Iranian leader Ahmadinejad’s regime were savagely beaten (and some of them killed) in the streets of Tehran for having demonstrated against the electoral frauds that led to his re-election, Ramadan kept on feeding the Iranian propaganda machine. By accepting to work for the Iranian television, Ramadan has endorsed the ayatollah Khomeini’s ideological heirs. Reacting to this situation, Rotterdam’s city authorities in the Netherlands fired Ramadan who was acting for them as an adviser on integration issues. They did not believe that he was a credible voice for moderation.

On March 18, 2010, the authorities at Carleton University in Ottawa, Canada, welcomed Ramadan to their campus, where he addressed an audience of 200 who paid $75 each for their tickets. Amira Elghawaby herself, a member of the Muslim Brotherhood network and a journalist for the Ottawa Citizen, wrote that the money collected would go toward the development of an Islamic Studies Centre at the university. She also reported that the university had promised to match the donations made by Ramadan’s supporters dollar for dollar. Needless to say, when the Muslim Brotherhood is involved in an academic project, it is their founder Hassan al-Banna’s doctrine that will be taught and promoted.

Elghawaby announced Ramadan’s visit in Ottawa without giving a hint regarding the guest’s controversial past. The following day, though, the Ottawa Citizen provided a correction, allowing its journalist Robert Sibley to discuss the links between Ramadan and the Muslim Brotherhood. Sibley quoted Ibn Warraq, Caroline Fourest and other experts on radical Islam who have exposed over the years how Tariq Ramadan wages his jihad in the West.

In the past, Tariq Ramadan has tried to win sympathy by talking about his spirituality. Was he using the same trick when he hypnotised the two experts assigned to the show On n’est pas couché by telling them about the importance that he accords to Muslim scholars? To study the texts by these Muslim scholars is to realize that they are essentially political manifestoes that justify the persecution of non-Muslims and regulate the life of the people in the minutest detail. Whenever and wherever they have lived, all of Ramadan’s scholars have tried to impose this collectivist model. Tariq Ramadan is pursuing the work of his heroes in the conditions of the twenty-first century – and employing the means of the twenty-first century.

Part 1: Tariq Ramadan, His Scholars, and His Jihad

Part 2: The Conquest of the West by Ideological Jihad