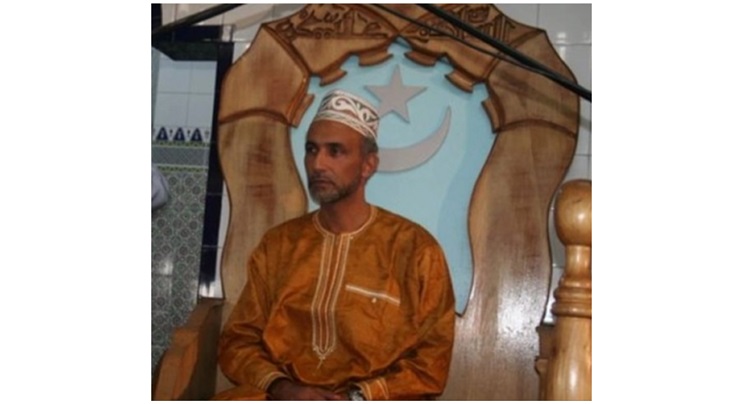 On May 19, 2017, Imam Shaker Elsayed justified female genital mutilations (FGM) in a sermon at Dar Al-Hijrah mosque in Falls Church (Virginia). The organization MEMRI published the video and a transcript of the sermon on its website. 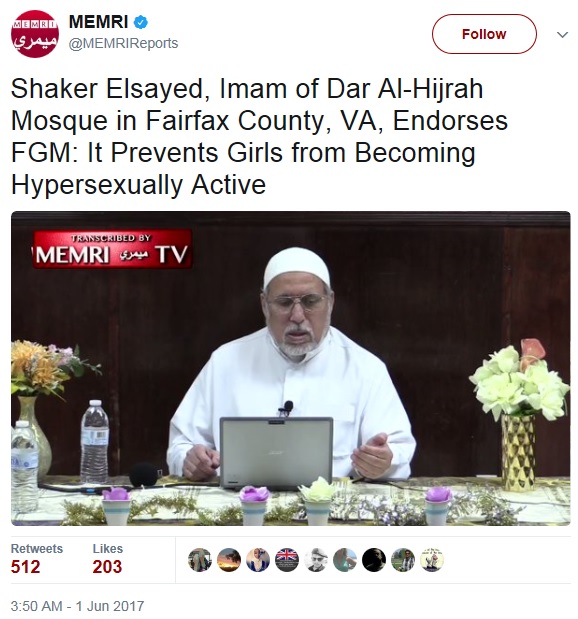 The Imam defends FGM by claiming that it prevents girls from becoming hypersexually active.

After the leadership of the mosque has refused to fire its Imam over his stance, one of the mosque’s directors publicly resigned from his position.

This is the context in which Tariq Ramadan chose to weigh in on the issue on his Facebook page.

Tariq Ramadan condemned as “vicious” and “Islamophobic” the organization MEMRI, the messenger that published the sermon justifying FGM, and Ramadan stated that the debate on the issue should take place among Muslims. “Instead of exposing people, let us have an open internal debate,” Tariq Ramadan wrote.

While declaring himself opposed to FGM, Tariq Ramadan acknowledges that some Muslim scholars endorse the practice: “Even though I am against these practises as I think it is not the right Islamic interpretation, it cannot be denied that it was condoned by some Muslim scholars (even contemporary ones).”

This last excerpt completely contradicts fellow travelers of Islamists such as Charles Taylor who claim that FGM are not part of Islam because “it is not mentioned in the Koran.”

Islamic justifications of female genital mutilations are not based on the Koran but on hadiths, which are texts allegedly describing words, actions, and habits of the founder of Islam. Scholar Youssef Qaradawi mentions one of those hadiths in his justification of FGM

According to article e4.3 in the Sharia manual Umdat Al-Salik, whose English translation contains an endorsement by the Muslim Brotherhood-linked  International Institute of Islamic Thought, the excision of the clitoris is obligatory for the Shafii school of thought in Islam while being only optional for Hanbalis and “a mere courtesy to the husband” for Hanafis.

Reliance of the Traveller (English translation of the Umdat Al-Salik) / WebArchive – Archive.Today

In its profile of the Dar Al-Hijrah mosque in Falls Church (Virginia) at the center of the controversy on FGM, the Investigative Project on Terrorism recalls that in 2001, the Imam of the mosque, Anwar Al-Awlaki, was the spiritual advisor of two terrorists who would later take part in the 911 attacks.

While he was an Imam at the Dar Al-Hijrah mosque in 2001-2002, Al-Awlaki was simultaneously involved in outreach programs with police and in the promotion of armed jihad with young Muslims. Recently released documents by U.S. authorities show that on February 5, 2002, when Anwar Al-Awlaki met Pentagon officials to discuss outreach activities with the Muslim community in the U.S., he was under surveillance by the FBI for his links with Al Qaeda.

On September 30, 2011, Al-Awlaki was killed in Yemen by a U.S. drone strike while leading the local Al-Qaeda branch.

As a former Dar Al-Hijrah mosque attendee pointed out to IPT News, “Ramadan’s decision to weigh in on the matter shows that Dar al-Hijrah is an important base for the Muslim Brotherhood in America.” 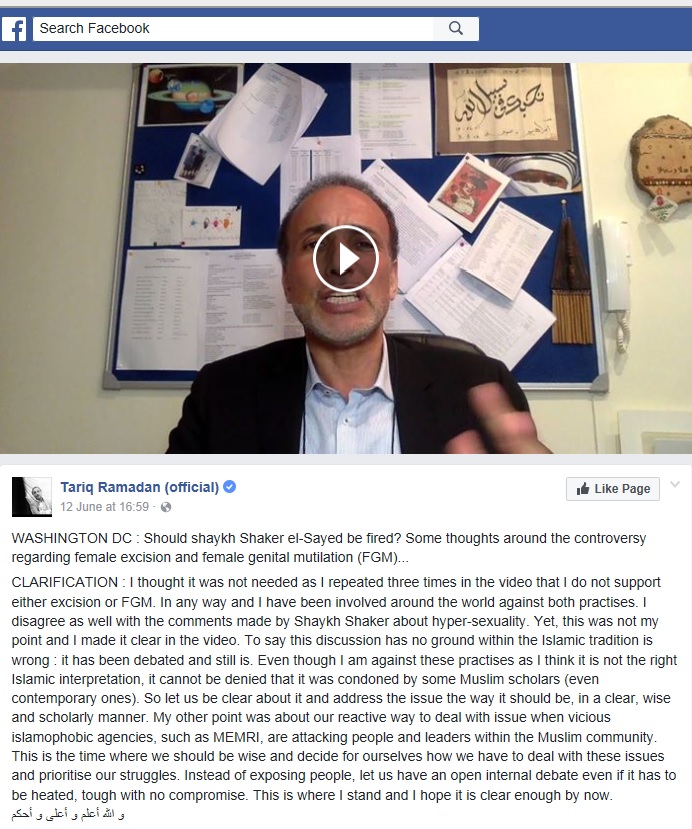