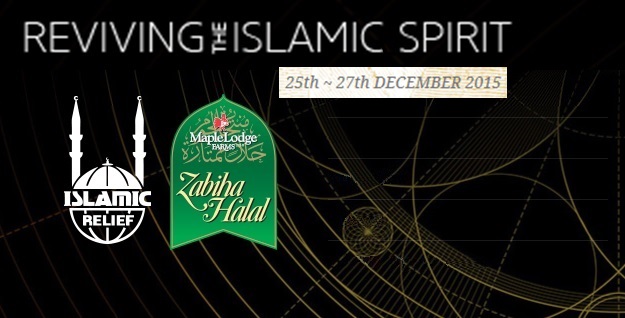 Maple Lodge Farms and Islamic Relief were the two sponsors of the #RIS2015 convention in Toronto.

Islamic Relief is the most important Muslim charity in the world. It has branches in several countries including Canada. It is still registered as a charitable organization in Canada. Canada Revenue Agency / Archive.Today

Currently, Hany (Hanny) El-Banna is Chair of Islamic Relief Canada’s Board and El-Tantawy Attia, one of its director. IRC Board / WebArchive – Archive.Today

Hany El-Banna is also a trustee of the UK-based Muslim Charities Foundation (MCF). In January 2015, MCF was “stripped of state funding in a crackdown on Islamist extremism.”

The British government took action after links were uncovered between MCF and a group alleged to fund Hamas and the Muslim Brotherhood political movement.

The British government’s decision was also motivated by the fact that MCF is sponsoring extremist speakers at events in Britain “who fuel hatred, division and violence.” The Telegraph / WebArchive – Archive.Today

Maple Lodge Farms is an important chicken supplier that was established in 1955 and is headquartered in Brampton (Ontario). In 2014, two representatives of the North American Muslim Foundation (NAMF) visited Maple Lodge Farms to assess the conformity of its installations with halal standards. In their report, the NAMF representatives indicated that Latif Mirza was Maple Lodge’s Community Relations Manager. In 2012, Mr. Mirza was listed as a Board member of the ISNA Development Foundation. In 2013, this organization’s charitable status was revoked by the Canada Revenue Agency for its links with a terrorist entity. According to the Canadian government agency, the ISNA substructure had provided tax receipts to a non-charitable entity collecting money for a Jamaat-e-Islami-linked terrorist organization in India. Latif Mirza LinkedIN / Archive.Today

In 2011, 2012, and early 2013, Maple Lodge’s halal certification was provided by ISNA-Canada. On October 16, 2013, shortly after the ISNA Development Foundation’s charitable status was revoked, Maple Lodge presented IFANCA as its new halal certifier.

Ahmad Sakr (1933-2015) was one of the IFANCA founders and, for many years a Board member and the Chairman of its Religious Advisory Council. ICNA / Archive.Today / GMBDW

In his book about the prohibition of pork in Islam, Sakr suggested that one of the reasons for such prohibition could ensue from a literal understanding of the Koranic verse 5:60 delving with the transformation of Jews into swine. Pork – Possible reasons for its prohibition / WebArchive

Ahmad Sakr (p. 11): “It is known that some of the children of Israel regularly disobeyed Allah and, as a result, were cursed. Some of them stagnated spiritually and mentally and hence became idol-worshippers; […] others became filthy of mind and body, gluttonous eaters of carnivorous animals, and lived totally a corrupted life as swines [sic]. […] It has been mentioned by Abdullah Yusuf Ali that perhaps both apes and swine are allegorical [in verse 5:60]: those who falsified God’s scriptures became lawless like apes, and those who succumbed to filth, gluttony, or gross living, became like swine. The Arabic word is very simple and straightforward where Allah says that He transformed or turned some of them into apes and idol-worshippers.”

“If […] one takes the meaning of the verse of the Qur’an as a reality rather than allegory, then one may deduce the fact that swine and apes were perhaps human beings who were degraded and brought down into animals. This type of interpretation may also reinforce the idea of evolution, in the reverse direction. It is known in biology that through the process of Hybridization and selection, evolution is a two-way process. […] If this is true, one may be able to think about the wisdom of prohibition of swine as it was a human being who was degraded to an animal stage. Therefore, it would be unlikely that one has to eat that type of flesh.” [Italicized words are presented as such in the original text.]

According to the NAMF report, “Hamid Slimi of Sayeda Khadija Center and Imam Nadvi of Al Falah Islamic Center of ICNA is [sic] also on their panel of consultants who routenly [sic] give seminars to the senior management of Maple Lodge Farms.”

In his book on terrorism, Hamid Slimi recommends a Saudi Koran which defines jihad as an “Islamic Holy War… with full force of numbers and weaponry… by [which] Islam is established [and] Allah’s Word is made superior.”

Imam Iqbal Nadvi is close to the Pakistani-based Jamaat-e-Islami (JEI). On March 14, 2014, he gave a Friday sermon at a mosque controlled by this Islamist organization in New Delhi (India). Video / Archive.Today

In his book Jihad in Islam, JEI’s founder Syed Maududi (1903-1979) summarized the mission of Islam, as understood by his supporters in Pakistan, India, and Canada as follows:

Islam wishes to destroy all States and Governments anywhere on the face of the earth which are opposed to the ideology and programme of Islam regardless of the country or the Nation that rules it. […] Islam requires the earth – not just a portion – but the whole planet. 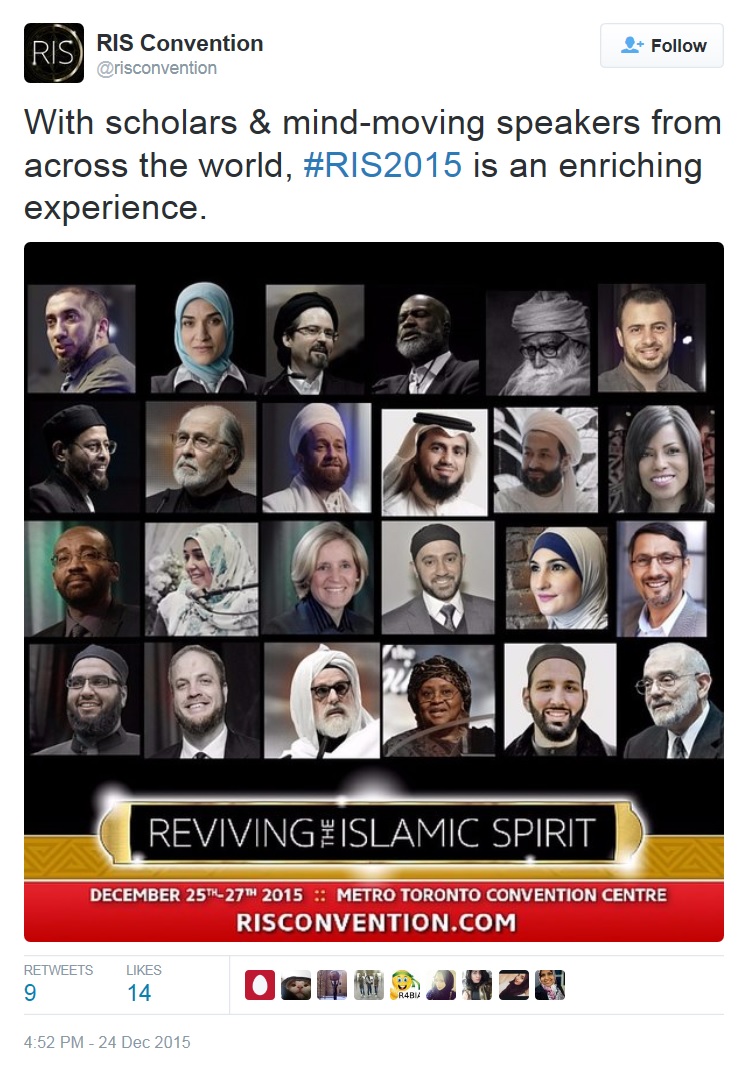 Tahir Anwar and Abdallah Bin Bayyah (tentative from the start) were on preliminary lists of RIS 2015 speakers but did not take part to the event.

Another version of the RIS 2015 list of speakers with their names and pictures.

FROM LEFT TO RIGHT

1.6   Isam Bachiri has also been announced as a performer at the RIS 2015 convention.
Twitter / WebArchive – Archive.Today

Point de Bascule (December 12, 2013): Reviving the Islamic Spirit – In 2003, the launch of the RIS conventions in Toronto was sponsored by an organization tied to Al-Qaida (WAMY sponsored the event.)

Point de Bascule (December 12, 2012): Hamas’ fund collector, IRFAN Canada, is added to the list of sponsors for the Islamist convention in Toronto (Then Liberal leadership candidate Justin Trudeau spoke at the event.)

Point de Bascule (January 8, 2014): Tariq Ramadan asks for PM Erdogan’s resignation at RIS 2013 in Toronto and finds himself on the defensive after Turkish media report the news