RCMP Outreach Fails to Distinguish between Radical and Non-Radical Muslims

On behalf of the RCMP, the Force’s Community Outreach office sent out an official email to members of the Diversity Consultation Committee to extend an invitation to a conference featuring Akbar Manoussi and others. The RCMP officer’s email noted that he would “already be attending this event as a guest of another Community member.”

The event is sponsored by four members of the Green Party: Paul Maillet, Sylvie Lemieux, Akbar Manoussi, and Qais Ghanem, the self-titled “Group of Four.”

Akbar Manoussi is a former Ontario Green Party candidate and the executive director of the Iranian Cultural Center, which is located inside the Iranian embassy. According to Maclean’s, an important group of Iranian-Canadian scholars and journalists wrote the leader of the Green Party in October 2008 to warn her of Manoussi’s close ties with the Iranian regime, adding that such a candidate hurts the Green Party’s image and leads to questions about the Party’s judgment.

Qais Ghanem is on the Board of Contributors of a pro-Islamist magazine, The Canadian Charger, established by the notorious Canadian Islamic Congress founder and former president, Mohammed Elmasry. Elmasry is known for his radical positions and was strongly rebuked by the government.

The program of the conference features Imam Zijad Delic, the executive Director of the Canadian Islamic Congress (CIC) as well as Tehran University representatives. Imam Delic’s scheduled appearance at the Canadian Department of National Defence was cancelled recently by the Defence Minister as the Imam and his organization were deemed too radical.

The CIC is also a member of the Mecca-based Muslim World League in Saudi Arabia, which propagates Wahabism around the world. This lobby promotes values that are contrary to Western liberal, pluralist and democratic values. It is an Islamist lobby that holds radical, fascist, antisemitic, totalitarian, and segregationist views.

The event will be held at the Government Conference Center in Ottawa. The Conference Center appears to require, among other things, that the list of visitors be submitted three days prior to the event for security reasons. This is noteworthy given that the Canadian government just announced that it had ceased its activities with the CIC because of its extremist nature.

Disturbing aspects of certain RCMP Community Outreach initiatives invite questions about whether the unit has drifted away from fulfilling its counter-radicalization mandate. The RCMP could now be perceived as catering to Islamists by pressing upon its affiliated community members an event with troubling implications and connections. This appearance of formal government support might well encourage attendance of those who would otherwise have quite sensibly kept their distance from the conference and its creators.

The record of RCMP Community Outreach points to an Outreach unit that may have become an inadvertent Islamist-legitimizing platform In other words, the unit and those responsible for its general direction – including RCMP Assistant Commissioner Gilles Michaud1 & 2 & 3, Commissioner William Elliott and Public Safety Minister Vic Toews – are, despite their best intentions, undermining national security.

These players do not seem to realize that RCMP Outreach in several important respects fails to distinguish effectively between radical and non-radical Muslims. It seems to distinguish only between those presenting an imminent physical threat, and those who do not. This outreach has therefore come to jeopardize the counter-radicalization efforts of genuine Muslim moderates as well as our ability to resist radical penetration of society and government, including police. 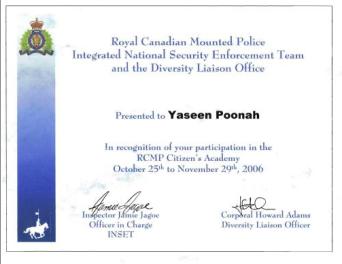 Point de Bascule has organized several conferences featuring Muslims who have immigrated to Canada in order to escape the violent totalitarianism of Islamist regimes or Islamist terror. Many such Canadian Muslims have stood up courageously against the threats of Islamists and Islamism, including, in some cases, against threats from their Canadian co-religionists. Consequently, it is disappointing to see accumulating evidence that the RCMP has been involving itself with Muslim Brotherhood and other radical Islamic organizations and individuals at the expense of genuinely moderate liberal-democrats. For radicals gain legitimacy through involvement in police outreach, and this enables them to elbow aside true moderates who hope to guide their communities on the path to integration and good citizenship.

Moderate Canadian Muslims of international standing have for many years tried to sound the alarm on issues such as the radicalization of Islamic organizations, the Islamist infiltration of key institutions, and the fact that our political establishment appears to be at once overrun by Islamist sympathizers and helpless to stop them. An independent investigation should be launched into the record of the RCMP Outreach organization, and of those who have managed and staffed the unit.

Islamists, Iran, and the RCMP’s “cultural diversity”, The MaCleans by Michael Petrou,Tuesday, 10-26-2010

Opposing Hassan al-Banna and the Muslim Brotherhood Is Not Some Kind of Racism by Point de Bascule, 2-09-2010