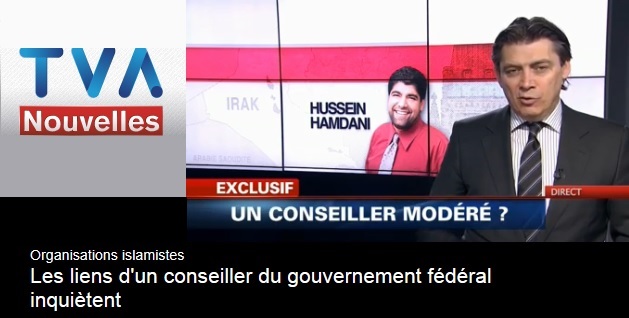 Islamist organizations: The federal government is worried about the relationships of one of its advisor.

After TVA revealed some troubling facts about advisor to Public Safety Canada Hussein Hamdani, Minister Steven Blaney’s office sent a statement to notify the Quebec-based TV network that the advisor had been suspended pending the results of an investigation.

There were three main points in the report that was broadcast by journalist Michel Jean on April 29, 2015:

Here is the reaction of Minister Blaney’s office, as published by TVA’s website / WebArchive – Archive.Today :

[Translation Point de Bascule] “These allegations are very disturbing. The participation of this individual to the Cross-Cultural Roundtable on Security’s activities has been suspended immediately pending the results of an investigation. Although allegations that this individual has relationships with radical Islamism have been circulating for a while, we thought that he could have a positive influence at promoting Canadian values in the Muslim community. It is now clear that it may not have been the case.”

Senate Committee on National Security and Defense (February 23, 2015): Point de Bascule Director Marc Lebuis testifies before a Senate Committee about the Islamist penetration of Canadian security agencies / Hansard – Video (A portion of the presentation was about Hussein Hamdani.)

Point de Bascule (April 30, 2015): Hussein Hamdani advocated “the Islamization of campus politics” before being appointed public safety advisor by the government of Canada