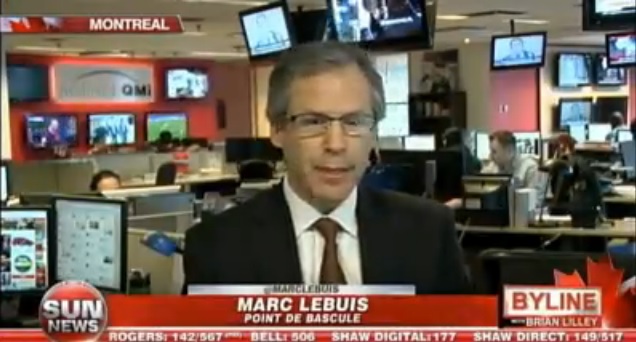 On October 21, 2014, Brian Lilley dedicated his Byline show to the attack waged by a Muslim convert, the day before, against two soldiers in Saint-Jean-sur-Richelieu, south of Montreal. In the first part of his show, Brian Lilley provided some background on Martin Ahmad Rouleau, he presented the reactions of Canadian political party leaders to the attack and he broadcast the Islamic State’s call to target Canadians by all available means, including with a car.

In the second part of his show, Brian Lilley interviewed the Point de Bascule director about the Al-Imane mosque attended by Rouleau in Saint-Jean. This portion of the show starts at 7:10.

They talked about Hamza Chaoui, a radical imam who has been invited by the mosque in the past to speak about Islamic principles. During the recent World Soccer Cup, Hamza Chaoui denounced the event as part of a Jewish plan for world domination. Chaoui has also promoted stoning and other Islamic punishments in the past.

They also discussed the fact that, when the president of the mosque, Abdel Hamid Bekkari, was interviewed by Montreal La Presse after the attack, he mentioned that an RCMP officer of Moroccan descent was a regular of the mosque, as if we should all be reassured by this and stop looking further to investigate into what contributed to the radicalization of Rouleau. When Islamists are under scrutiny, as it is the case now in Saint-Jean or in Toronto in 2012, when the Islamist RIS convention was criticized by Point de Bascule for being sponsored by Hamas’s fun collector in Canada, they deflect criticism by reminding the support they received from Canadian authorities in the past, and from the RCMP in these two specific instances.

Hamza Chaoui Youtube Channel: Conference given at the mosque in Saint-Jean sur Richelieu (The video is not accessible anymore but the information about the conference is still there.)