Omar Kalair, founder of UM Financial – Past sponsor of the Islamist RIS convention on trial for sharia banking fraud 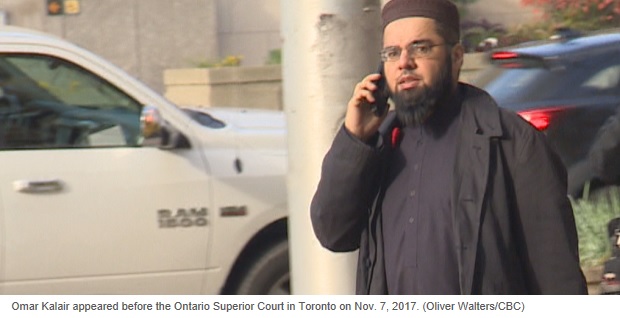 The case against Omar Kalair began in 2011. He was charged in 2014 of pocketing millions in ‘Shariah-compliant’ mortgages. His trial started on November 7, 2017.

The CBC’s article highlights that, although sharia-compliant mortgages such as those offered by Omar Kalair’s UM Financial are “technically interest-free”, “a fee is being charged to its clients for its religiously-sanctioned mortgages – at a sum higher than what borrowers would usually pay at market rates.” In 2008, Tarek Fatah referred to Muhammad Saleem’s book Islamic Banking – A $300 Billion Deception and made the same point in a Globe and Mail‘s article.

1990s – Omar Kalair founded the Muslim Students’ Association at Wilfrid Laurier University (Waterloo) and remained its President for four years. In 1963, the Muslim Students Association was the first organization set up by the Muslim Brotherhood in North America. A 2007 NYPD report describes MSAs as “incubators” for radicalism / Archives PdeB (p.68).

DECEMBER 23-26, 2005 – UM Financial sponsored the Islamist RIS convention in Toronto. This convention was launched in 2003 with the sponsorship of the Saudi-based / terror-funding World Assembly of Muslim Youth. In 2005, Zakir Naik, Tareq Suwaidan, Omar Abdel Kafi and Zaid Shakir were among the preachers invited at the convention. Zakir Naik has since been banned from visiting Canada due to his support for Al Qaeda and terrorism. In a 2001 speech, Zaid Shakir said that, if better organized, Muslims could “take over this country [the U.S.] in a very short period of time. So, we’ve got a lot of foundational work to do and we must do if we’re serious about the task that is before us.” Tareq Suwaidan has been advocating the return of the caliphate (world Islamic government) and a new era of cyber jihad.

DECEMBER 22-24, 2006 – For a second year in a row, UM Financial sponsored the Islamist RIS convention in Toronto. In 2006, Abdallah Bin Bayyah, Hamza Yusuf, Tariq Ramadan and Siraj Wahhaj were among the preachers invited at the convention.

In the past, Siraj Wahhaj advocated harnessing street violence in the United States for the benefit of Islam. He invited his supporters to convert youth who felt excluded, and eventually to arm them with Uzi submachine guns so that they could wage jihad in U.S. streets. (Point de Bascule – Muslim Mafia / pp. 136-137)

JANUARY 8, 2007 – Omar Kalair told the Toronto Star / Archive.Today that Mohammad ordered Muslims to obey the laws of the land, wherever they lived, “as long as the laws don’t conflict” with Islam.

MARCH-APRIL 2012 – UM Financial Group was given an award by the magazine World Finance for being a ‘Pioneer in introducing Islamic financial services in North America’. In January 2013, this mention was withdrawn from the magazine’s website.

APRIL 6, 2015 – Benefits Canada / WebArchive – Archive.Today, a specialized Rogers publication, featured Omar Kalair in an article promoting the introduction of Islamic bonds in Canada without telling its readers that he was awaiting his trial for sharia banking fraud.

A Toronto businessman accused of pocketing millions in fraudulent mortgages marketed to Muslims, emptied his accounts and led investigators on “a treasure hunt” to find nearly $2 million in gold bars, a federal prosecutor told a jury Tuesday. Six years later, where the bars have gone remains a mystery for authorities.

Crown attorney Damien Frost made his opening statement at the trial of Omar Kalair, dubbed the “Muslim Madoff” by homeowners who bought into his “Shariah-compliant” mortgages that left them thousands of dollars in the hole.

Kalair, 42, holds a graduate diploma in business, was once admitted to a PhD program in economics, and has spoken at a number of international conferences on Islamic finance — once at Harvard University.

“The case we will present to you is about theft, fraud and money laundering,” Frost told the 12-member jury (five women, seven men) and two alternate members on the first day of the trial.

Prosecutors told a virtually empty courtroom that just days before Kalair’s company, UM Financial, went into receivership, Kalair and Yusuf Panchbhaya, 59, agreed to purchase over $2 million in gold and silver bullion, bought with the last of the company’s money. Panchbhaya was the chairman of a board of religious advisers who issued fatwas sanctioning the businesses mortgages as Islamic.

Kalair arrived alone Tuesday, wearing mostly black with a brown traditional cap, a poppy on the lapel of his jacket. For most of the day, he sat listening intently as the judge instructed the jury, breaking his stoic expression for just a moment looking bemused when a hunched-over Panchbhaya had fallen asleep.

Kalair and Panchbhaya have both pleaded not guilty to the charges laid by the RCMP in 2014, which include theft over $5,000, fraud over $5,000 and laundering the proceeds of crime.

In his opening statement, Frost told the jury they would hear from a retired ScotiaBank manager at the branch where Kalair inquired about purchasing $1 million in gold bars, and a bank employee who authorized the gold to be released, among others.

The case against the accused began in 2011, when some 180 homeowners were left in the lurch. That’s when a superior court judge placed UM Financial into receivership after it emerged that mortgage payments that were supposed to be remitted to the Central 1 Credit Union were in arrears. Central 1 Credit Union had extended millions of dollars in loans to UM Financial since 2004.

In the years leading up to the scandal, UM Financial had built up an estimated $32 million-portfolio of what were billed as Shariah-compliant mortgages. Some Muslim scholars hold that it is not permissible to charge or receive interest on loans according to Islamic law.

At the time, the company boasted it was “Canada’s premier Islamic Financial Institution,” at one point working towards an application for a Canadian bank licence — and was profiled on the business pages of some of the country’s major newspapers.

But while technically interest-free, UM Financial charged a fee to its clients for its religiously-sanctioned mortgages — at a sum higher than what borrowers would usually pay at market rates.

Fast-forward to 2014, three years after the fallout with Central 1 Credit Union, the RCMP would lay fraud charges against both Kalair and Panchbhaya for allegedly pocketing $4.3 million in mortgage payments, as well as the purchase and disappearance of 32 kg of gold bars.

Kalair would eventually disappear, leading police to launch a Canada-wide warrant for his arrest, according to an RCMP news release. He turned himself in in March 2014.

Precious metals to be paid to ‘unnamed clerics’

In outlining his case, Frost said Kalair purchased nearly $2 million in gold bars and over $300,000 in silver coins purportedly to pay the professional fees of Shariah scholars, chaired by Panchbhaya. That’s despite the fact that for six years, from 2005 to 2011, not a single invoice had ever been issued for the religious advice, Frost told the jury Tuesday.

Those precious metals would end up in the hands of an individual named Joseph Adam, the Crown said.

Panchbhaya designated Adam the Shariah board’s manager of finance, authorizing him to take possession of the gold and silver to be paid to “unnamed clerics.”

Frost told the court that in November 2011, Panchbhaya returned the silver to the court-appointed receiver, Grant Thornton, but that almost $2 million in gold is still missing.

If convicted, the pair could face a maximum sentence of 14 years in prison.

The trial continues next Tuesday.