Point de Bascule does not endorse the content of this document. It is archived on this website strictly for reference purposes.

The corollary is that only the Conservatives can save us from the Muslims, so they frighten people before the federal election. HUSSEIN HAMDANI

Three months ago, Hussein Hamdani was widely hailed as a hero on the front lines of Canada’s war against homegrown terrorism, regularly pulling teenagers back from the brink of radicalization — before they boarded a plane to Syria or Iraq.

He has been the federal government’s bridge to the Muslim community, and at a counter-terrorism summit in Washington in February, Public Safety Minister Steven Blaney himself praised the efforts of Hamilton’s Muslim Community — of which Hamdani is an integral part.

Following recent reports on a Quebec blog and then a news network, however, Hamdani now stands accused of being a radical Islamist himself — and the federal government has stopped returning his emails.

But is Hamdani, by day a corporate and commercial lawyer, really a fox in the henhouse?

Or is he, as some suggest, the latest target in a fear and smear campaign, made in Quebec and imported to Ottawa?

Hamdani learned the news like everyone else: through the Quebec media. At the end of April, the TVA news network reported that Hamdani had been suspended from the Cross Cultural Roundtable on National Security, which he has sat on since 1995.

“I’ve been there longer than Stephen Harper has been prime minister,” Hamdani said earlier this month, from his office in downtown Hamilton.

The Roundtable, which has 15 members from different ethnocultural communities across Canada, is meant to be a bridge between those communities and the government, meeting every few months to “focus on emerging developments in national security matters and their impact on Canada’s diverse and pluralistic society.”

Among their recent topics: countering violent extremism, cyberspace and migration.

Hamdani has also led outreach efforts, helping CSIS and the RCMP approach sometimes reluctant groups, while intervening with youths showing signs of radicalization on behalf of their parents. “I’ve probably done more than anyone else in Canada,” Hamdani says. “And because we’re exposed to certain information that’s not public and we work with the RCMP and CSIS, I have security clearance and my background has been vetted. There are no links to anything of concern.”

That was until a Quebec blog, Point de Bascule, re-published some of his student writings in April and alleged he was linked, through his charitable donations, to organizations like IRFAN-Canada, designated a terrorist group by the federal government in 2014 for its links to Hamas.

When IRFAN-Canada lost its charitable status in 2011, Minister Blaney said: “The well-intentioned and charitable Canadians who sought to support humanitarian relief through this organization deserve better.”

Point de Bascule, which has been active since 2006, describes itself as an “an independent and nonpartisan website describing the means and methods used by Islamist organizations and leaders in order to further their program in Canada.”

It placed particular emphasis on Hamdani’s writings as treasurer of the Muslim Students Association at McMaster University in 1996, where he called for the “islamicization” of campus politics, urging Muslims to become active in campus newspapers, the student union and on clubs and committees.

“If we do not step up our program, then the non-Muslims will push us to the fringes of campus society,” he wrote.

What is curious, Hamdani says, is that none of this information is new.

“Islamicization” meant something different in the pre-9/11 world, he explains. Besides, he says, his views on same-sex marriage have evolved since the 1990s.

The federal government knew about his student activism, as well as his role in organizing a World Muslim Summit in Toronto in 2003, another point raised by Point de Bascule as evidence of his radical nature (and listed on his roundtable bio).

In 2004, Hamdani also wrote openly about studying Islamic movements in the occupied West Bank, where he met with Hamas founder Ahmed Yassin, an article published the year after Yassin was killed in an Israeli air strike, and the year before Hamdani was named to the Roundtable.

Minister Blaney had Hamdani suspended from the roundtable the day the story appeared on TVA, “pending a review of the facts.”

“These allegations are very concerning,” said Jeremy Laurin, Blaney’s spokesperson. “While questions surrounding this individual’s links to radical ideology have circulated for some time, it was hoped that he could be a positive influence to promote Canadian values. It is now becoming clear this may not have been the case.”

Laurin did not respond to followup questions about whether and how often Hamdani was vetted, or what led the minister to conclude he may no longer be a positive influence.

What had changed? Hamdani believes it’s all about politics — and his support of the Liberal party.

The man behind Point de Bascule, Marc Lebuis, was invited to speak before the Senate Standing Committee on National Security and Defence in February, where he first aired accusations against Hamdani.

But it wasn’t until after Hamdani organized a fundraiser for Justin Trudeau on April 14, and sent a letter to subcommittee members about his intention to speak before the committee, that he was suspended from the roundtable.

But Hamdani and others believe the suspension is also a way to promote the “fear industry.”

“There’s a campaign to make Canadians afraid of Muslims and the religion of Islam,” Hamdani says. “The corollary is that only the Conservatives can save us from the Muslims, so they frighten people before the federal election.”

Ihsaan Gardee, the executive director of the National Council of Canadian Muslims — also listed as an “actor” on Point de Bascule — said it was deeply troubling that the government would choose to act on allegations from a Quebec blogger rather than information provided by Canada’s security agencies.

“At best, it speaks volumes of the low regard for security agencies that protect Canadians, and at worst it’s a political witch hunt based on innuendoes and guilt by association,” Gardee said. “The decision to suspend Hamdani has damaged the trust of Canadian Muslims. It really calls into question whether the government wants to work with Canadian Muslims or use them as a political punching bag.” Who is Marc Lebuis, and who is behind his website?

Efforts by the Montreal Gazette to reach Lebuis, through the website, by phone or through his Twitter account over the last week have been unsuccessful. Former Sun News Network broadcaster Ezra Levant, who has interviewed him several times, said he would pass on a message to Lebuis.

Meanwhile, Adam Thompson, the clerk for the Senate’s Committee on National Security and Defence, said the committee had no CV or other form of biography on file for Lebuis. Lebuis was presented by the chair of the committee, Conservative Senator from Yukon Daniel Lang, as the “founding director of the Montreal-based independent research organization Point de Bascule,” but no further qualifications were given.

There is no business or charity listed as Point de Bascule, or under Lebuis’s name, although the website does accept donations.

Siegfried Mathelet, a post-doctoral researcher at the Université du Québec à Montréal, said he knows of Lebuis as a “pseudo-expert” who has worked for years to gain influence with political decision-makers and the mainstream media, even though he has no links to academic research.

“He is a militant,” said Mathelet, who is with the UNESCO-UQAM chair on the philosophical foundations of justice and democracy. “He has built up his own title and recognition because of this activity he has been doing for years.”

His modus operandi, like that of numerous anti-Islam bloggers and organizations based in the U.S., Mathelet explained, is to take anything problematic associated with Islam — like the Boko Haram or ISIS attacks — and link them to people in Quebec and Canada.

“The effect is to discredit their role in the public sphere. But these linkages don’t hold up and we are projecting malicious intentions on them just because they are Muslim.”

Unlike the U.S. websites, where many are registered charities or funded by foundations that have to declare their donations, it is not known who, if anyone, is funding Lebuis or Point de Bascule, which is said to employ 10 researchers.

Matthew Duss, the lead author of Fear, Inc. 2.0. — a report published by the Centre for American Progress (funded by a grant from the Open Society Foundation which was established by investor and philanthropist George Soros) on anti-Islam organizations and their sources of funding — says Muslimbashing is a very lucrative business in the U.S. and it might be in Canada, too.

Pamela Geller — the woman who organized the Draw Mohammed contest in Garland, Texas — is paid about $200,000 a year by the American Freedom Defence Initiative, which reported $958,800 in annual donations last year.

“You have this group of political hawkish donors who see a benefit to creating a political environment of fear and hostility toward Muslims,” says Duss, who is now president of the Foundation for Middle East Peace. “Extremism and violence motivated by religion is a problem. But to present Islam as a whole as hostile to West civilization and democracy is outright bigoted.”

Duss believes Point de Bascule may be part of an international “Islamophobia network.”

Point de Bascule’s story on Hamdani appeared on Geller’s website as well as that of Steve Emerson’s Investigative Project on Terrorism, where it appeared under the heading Hamas-loving Canadian Islamist Baffled by Suspension.

Both the Geller and Emerson postings were then re-posted on Point de Bascule.

Hamdani, meanwhile, has yet to hear directly from the federal government about his suspension, even though the U.S. government has invited him to Washington in July to share his expertise in deradicalization.

But the impact of the allegations has been very negative, he says.

“Anyone who is an active member of the Muslim Community has a dossier on Point de Bascule. It was almost a badge of honour. But this has been devastating,” says Hamdani, who is planning to sue various parties for defamation — possibly even the public safety minister, though he would not confirm that.

“I live and die by my reputation and these are such stigmatizing allegations. There is probably no worse thing to call someone than a pedophile. The second worst is a terrorist. It’s been immensely hurtful and stressful and deeply concerning.”

PHOTO The Canadian government might not want him anymore, but the U.S. Department of Homeland Security still wants to hear what Hussein Hamdani has to say about deradicalization. Hamdani was suspended as an adviser on Muslim issues and security for the Canadian government in early May. Glenn Lowson / for the Montreal Gazette 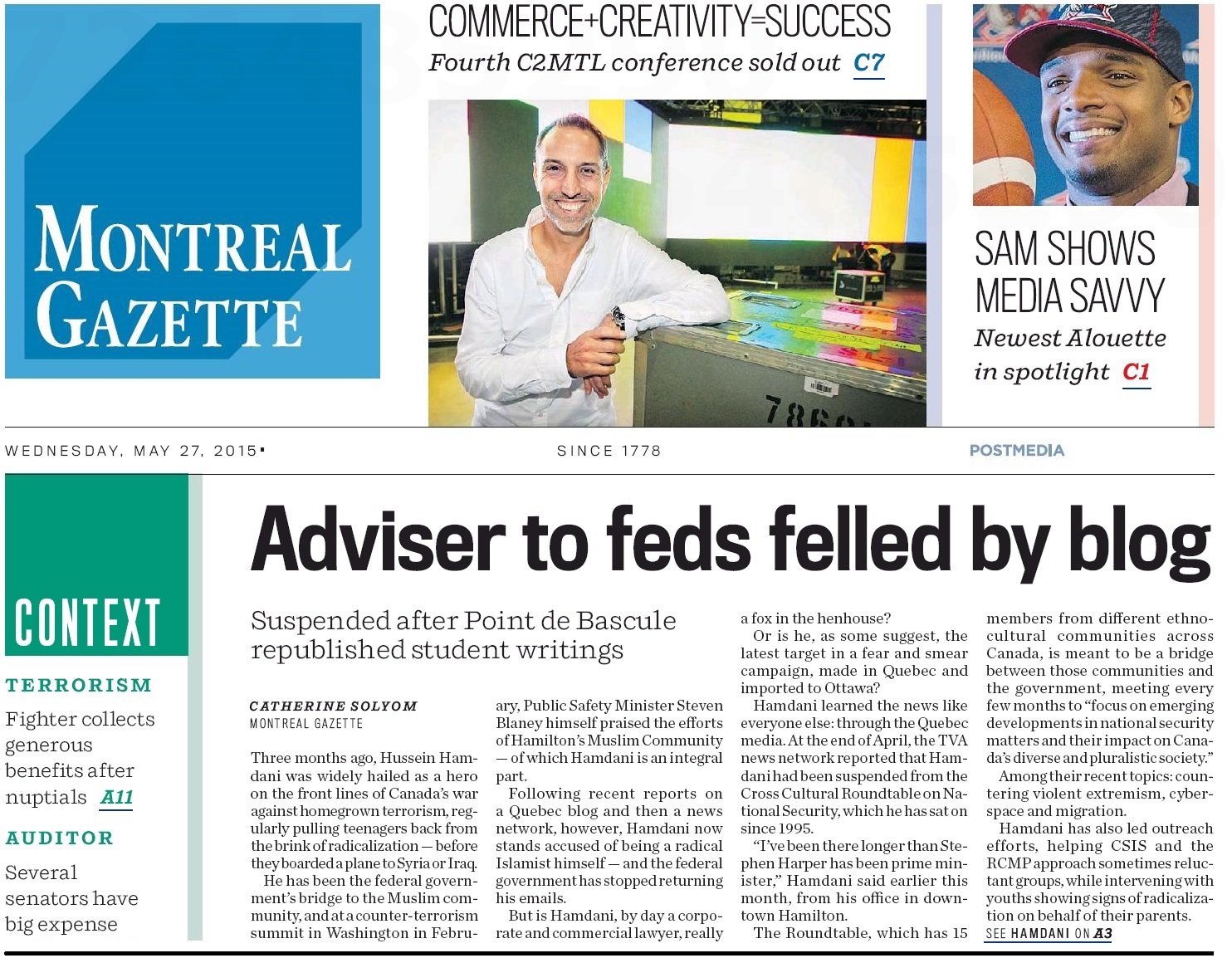 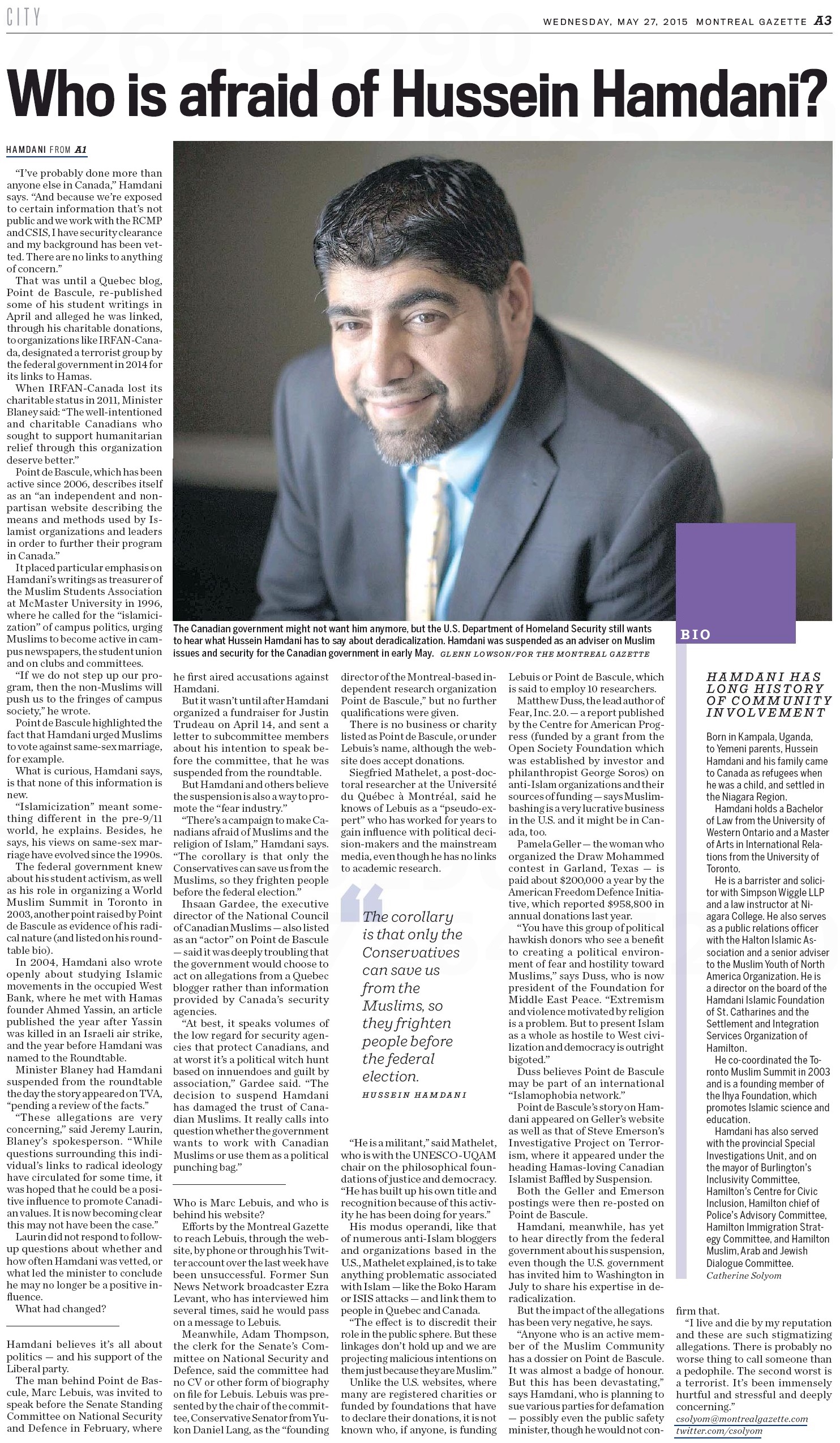