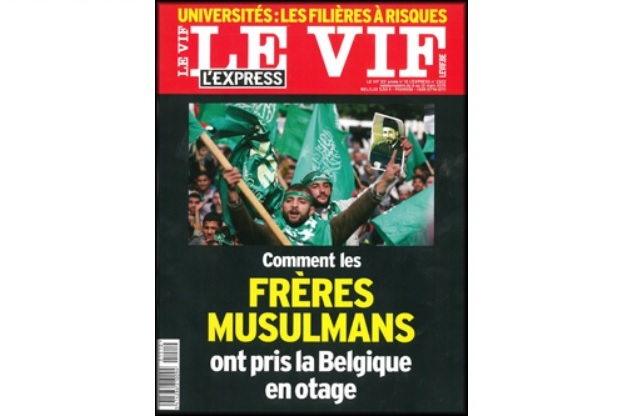 In its March 6, 2015 edition, the Brussels-based magazine Le Vif/L’Express published a three-part report by journalist Marie-Cécile Royen on the penetration of the Muslim Brotherhood in Belgium.

French translation of excerpts and summaries by Point de Bascule

Main Article: How the Muslim Brotherhood has taken Belgium hostage

EXCERPT The Muslim Brotherhood discretion – With the exception of Michaël Privot, director of Enar, a European-based anti-racism lobby, no member of the Muslim Brotherhood, has ever accepted to disclose oneself in Belgium. [The Brotherhood] has a cult of secrecy. […] During the 1990s, the Brothers were asked, during private meetings, to shave their beards, in order not to be identified as “bearded”. They cultivate to perfection the art of blending in within the landscape, and adapting to the existing “context”. The word “context” is also a term that shapes their language, along with, “Islamophobia”, “citizenship” and now “co-inclusion”. (p. 45)

EXCERPT Prepare against the unbelievers, whatever you are able of power, and horses to terrify the enemy – When one is a Brother (to a slight or significant extent), it is better not to express oneself too clearly on issues that get people angry (violence in politics, equality between Muslims and non-Muslims, freedom to apostasy, status of women…) but rather redirect to the “context”. Because, in its natural state, the Brotherhood program has something to make one shudder. The Egyptian Brotherhood was, in fact, the matrix of political Islam that ignited the four corners of the world in its jihadist version. In the Brotherhood’s logo, both crossed sabers under the Quran are accompanied by the beginning of Surah 8, verse 60 (The Spoils of War): “And to encounter them [the unbelievers], provide whatever force and trained ever-ready horses you can afford whereby you may strike terror into the enemies of Allah and your enemies as well and others besides them whom you do not know but whom Allah knows. The reward of whatever you expend in the way of Allah shall be repaid to you in full, and you shall not be wronged in any way.” In Arabic the word “terrify” has the same root than the word “terrorist.” (pp. 45-46)

EXCERPT Create or maintain tensions – Emerging in the 1980s as students or political refugees, fleeing the countries where they wanted to impose themselves, the Muslim Brotherhood built a permanent infrastructure in Belgium, and sparked the creation of numerous organizations. They especially pursued and undertook permanent lobbying efforts with public authorities with the intent of becoming the official spokespersons for the Muslim community.  In 2001, and later in 2007, a report from the Committee attached to the Parliament supervising the Belgian Police Services (Committee R), stressed another aspect of their strategy: “Spark or maintain tension”. (pp. 46-47)

EXCERPT Belgium political parties are at the mercy of calls to vote emanating from mosques and certain embassies – Historically, and for different reasons, certain Christian Democrats and some seculars have succumbed to the Brotherhood’s seduction, delighted by their polite and engaging talk. […] What would today’s Socialist Party be without the calls to vote that emerge from mosques, certain embassies and even Salafist preachers who […] loudly called to vote [socialist] in 2012? Probably less than 10% in Brussels. […] It is the Ecolo party, at the present time, that appears to be the most susceptible to the ideology being disseminated by the Brotherhood in Europe. This political party, in Brussels, has always had the gift of attracting candidates that sway between the extreme left and Islamism. (pp. 47 & 48)

EXCERPT After political and community involvement, influencing the course of events via the economy – According to savvy Muslims of the new generation the best opportunities today, are not found in community works or politics, but in the economy. […] Nouman Ali Khan, a Muslim Brotherhood leader in North America, disputes the goal of the Islamic State to reach statehood: “If you truly want to take control of a society, you know what you should be taking control of? The private sector.” Muslim Americans should create “colossal businesses like Wal-Mart, in order to influence the course of events”. Economic activity generates income that can then be reinvested in the religious sector at large. (p. 48)

SUMMARY – After discovering that the perpetrators of the September 11, 2001 terror attacks had drifted into extremism under the influence of the Muslim Brotherhood, the Bush administration responded by limiting its contacts with representatives of the Brotherhood. In 2005, it reverted to the post-war American policy by partnering with the Brotherhood once again.

This proximity between the American administration and the Muslim Brotherhood can also be observed in Belgium. The article highlights that “the American strategy of consistent pampering of the new generation of Brothers persisted, whether it pleases the Belgian authorities or not”.

Many examples of activities launched by the U.S. embassy in Brussels for the benefit of the Brotherhood are mentioned in the article.

SUMMARY – The main article indicated a new trend being followed by the Muslim Brotherhood to focus on the economy after sustained and fruitful efforts in political and community arenas since their arrival in Belgium in the 1980s. The third article presents a profile of a new type of militant: businessman Lassad Ben Yaghlane. Having arrived from Tunisia in 1987, Ben Yaghlane began his economic ascent in 1999. He built a distribution, catering, and service empire dedicated to the Muslim community.

A radiothon, organized in 2014, and broadcast on his radio station, Arabel, collected $275 000 for Islamic Relief and Al Aqsa Humanitaire. Both organizations are banned in certain countries for transferring money to the terrorist group Hamas. Zaku Chairi, a comedian who mocks the idea of de-radicalization, led Lassad Ben Yaghlane’s radiothon.

The Arabel radio station is also involved in the organization of a Qatar-sponsored conference on Islam. It will feature Tariq Ramadan in Brussels this mid-March.

Arabel just enlisted the services of Fatima Zibouh as editorial adviser. She has been with Muslim Presence (Belgium chapter), an organization founded by Tariq Ramadan. 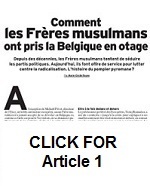 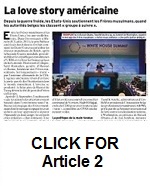 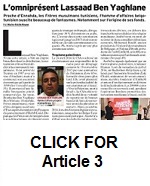