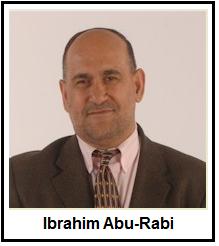 Over the years, he became a colleague of other Muslim Brotherhood heavyweights at Hartford: Ingrid Mattson, Yahya Michot and Mahmoud Ayoub.

(Hassan) al-Banna went about organizing his movement with ceaseless zeal, bringing about radical changes in certain key concepts and practices. One of the changes al-Banna hoped to introduce was the status of the mosque, bringing it from a static place of worship to a center of Islamic revolution. (pp. 76-77)

In his review of the book,Daniel Pipes writes that Abu-Rabi served as an “apostle” of Sayyid Qutb (1906-1966) to an English-speaking audience.

I think (Sayyid) Qutb is one of the most significant thinkers in modern and contemporary Arab Islamic resurgence. Sometimes, he is more important than Hassan al Banna, if not often, although Hassan al Banna was the founder of the movement.

Hassan al-Banna was very critical of Westernized ideas, especially at the level of education and philosophy. He was not open to accept these ideas, because of their corrupting presence. (religioscope.com)

Ibrahim Abu-Rabi gave a course in London (U.K.) that was advertised by the Muslim Council of Britain (MCB), a Muslim Brotherhood affiliate. (GMBDR)

Abu-Rabi became the first holder of the Edmonton Council of Muslim Communities Chair in Islamic Studies affiliated with the University of Alberta. Abu-Rabi took up his appointment on July 1, 2008. The Chair in Islamic Studies was established through a generous donation from the Edmonton Council of Muslim Communities (ECMC). (University of Alberta)

Although we do not know who made the “generous contribution” to the ECMC in the first place, it is frequent that petrodollars (not Albertan petrodollars!) are being transferred to colonize Western universities. Khalid Tarabain, an ECMC director, is also the head of the Arabian Muslim Association (AMA) in Edmonton. In 1981, AMA received $1.5 million from Muammar Gaddafi to set up the Canadian Islamic Centre jointly managed by AMA and Libya. The joint venture is officially involved in real estate and education in Edmonton. This donation occurred while Gaddafi’s Libya was actively involved in terrorism. It came to light when a legal disagreement between AMA and a former employee ended up in Court in 2004. (CanLII)

Point de Bascule: The Muslim Brotherhood and Gaddafi were partners not too long ago

Abu-Rabi wrote a very favourable comment about the Turkish Islamist leader Fethullah Gülen in an introduction to Contemporary Islamic Conversations (Nevval Sevindi, SUNY Press, 2008) Google Books. Abu-Rabi claimed that “Gülen defends a ‘progressive’ notion of Islam in which Muslims are able to totally engage the world without any fear or prejudice.”

Gülen has developed an approach similar to that advocated in the 1991 Muslim Brotherhood memorandum (“eliminating and destroying the Western civilization from within”) in order to Islamize Western societies:

“You move in the arteries of the system without anyone noticing your existence until you reach all the power centers…until the conditions are ripe… If you do something prematurely, the world will crush our heads. The time is not yet right. You must wait until such time as you have gotten all the state power, until you have brought to your side all the power of the constitutional institutions in Turkey… The work to be done is in confronting the world. Now, I have expressed my feelings and thoughts to you all-in confidence…trusting your loyalty and secrecy.” (Middle East Quarterly)

The Gulen Movement paid homage to Abu-Rabi when he died.

Abu-Rabi took part in an interfaith meeting organized by Gaddafi’s WICS in Tripoli (Libya) with Evangelical Christians and other Muslim Brotherhood leaders: Mahmoud Ayoub (IIIT and WICS), Munir El-Kassem (MAC) and Nihad Awad (CAIR). The report of the event (including the list of participants) is archived on Point de Bascule.

“There does not exist progressive Islam, or radical Islam or political Islam or sultan’s Islam, on the one hand, and reactionary or pacifist Islam on the other. There is one Islam only and one book, which God revealed to his prophet and which the prophet conveyed to the people.” (A quotation from Fahmi Huwaydi used by Ibrahim Abu-Rabi as an introductory remark)

(…) (T)he goal of the Islamic movement has been, by and large, to create an Islamic state. It has proposed through its leading intellectuals that “authentic or correct Islam” can only be practiced in an Islamic political system. This has been the major argument of such Islamic movements as the Jama‘at Islami of South Asia, the Muslim Brotherhood of the Arab world, the Khomeini movement of Iran, the Ma‘sumi of Indonesia, the Refah party of Turkey, and the Hizb al-Tahrir of Jordan and Central Asia.

In the case of Iran, the clergy or the ulama are in control of state and society.

(…) It is clear that the only successful Islamic revolution thus far has been waged by Khomeini, and Iran, to my knowledge, is the only state in the contemporary Muslim world where the clerisy (learned elite – PdeB) is in firm political control. This is not true in Pakistan, or even Saudi Arabia.

In the Introduction of his book Priorities (1990), Youssef Qaradawi explains that the role of Muslim intellectuals involved with the Muslim Brotherhood, such as Ibrahim Abu-Rabi, consists of “lay(ing) down a mature, inspired understanding of the Islamic Movement (…) based on a legal foundation derived from the texts and goals of Sharia”. Qaradawi adds that Muslim intellectuals must target “the elite of educated and cultured Muslims who did not actually have a chance to know Islam in a right and proper way”.