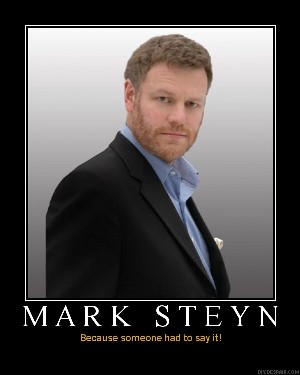 Like most folks outside Colonel Gaddafi’s immediate family, I greatly enjoyed Sheikh Qaradawi’s recent fatwa calling on “whoever can fire a bullet” to kill the Libyan leader. But Point de Bascule, the excellent Quebec website, points out that until recently Qaradawi’s Muslim Brotherhood and Gaddafi’s World Islamic Call Society were all buddy-buddy.

Along the way, Point de Bascule also sheds some light on a fellow called Dr Mahmoud Ayoub, who was an “expert witness” at my “Islamophobia” trial at the British Columbia “Human Rights” Tribunal. He was flown in from his university in Philadelphia, and treated with fawning deference by the Canadian Islamic Congress’ oleaginous counsel, and only marginally less so by the troika of hack “human rights” judges. Dr Ayoub described himself as a loyal Canadian citizen who shared Trudeau’s vision of a harmonious multicultural society but had moved to America because Canadian taxes were too high. At this point I leapt to my feet and cried, “Objection, your honor! Every loyal Canadian knows that confiscatory taxation is an indispensable part of Trudeau’s vision of a harmonious multicultural society.”

Well, no, okay, I didn’t. I let it go, and soon Dr Ayoub was testifying that we’d all got the wrong end of this “jihad” stick: It was nothing to do with blowing up infidels and such, but was a benign lifestyle concept that translated out of Arabic means “healthy, nutritious, lo-fat granola bar” (I quote from memory). The usual Islamoguff. May Allah bless the Canadian taxpayers who sprung for his round-trip airfare.

Anyway, among the evidence of my “flagrant Islamophobia” cited in the official complaint was my quoting of Colonel Gaddafi as follows:

There are signs that Allah will grant Islam victory in Europe without swords, without guns, without military conquests. The 50 million Muslims of Europe will turn it into a Muslim continent within a few decades.

Maclean’s counsel rose and quoted the above passage, at which point the Canadian Islamic Congress’ lawyer, Faisal Joseph, objected on the grounds that Gaddafi “has no credibility in the Muslim world”.

If that’s true, why then had Joseph called as his “expert witness” Mahmoud Ayoub? Dr Ayoub was not only the “representative of the Americas” on the executive committee of Gaddafi’s World Islamic Call Society (in which capacity he had sent a cable of thanks to “Brother Mu’ammar Al-Gaddafi”), but he was also the author of a sycophantic biography called Islam and the Third Universal Theory: The Religious Thought of Mu’ammar al Qadhdhafi, published in 1987 – or, if you’re using the Jihad Calendar, halfway between the Libyan bombing of a German disco full of US soldiers and the Libyan bombing of Pan Am 103 over Lockerbie.

So the plaintiffs were simultaneously arguing that Gaddafi has no credibility in the Muslim world, but his hagiographer has such credibility we’re calling him as an expert witness. By the way, Dr Ayoub is the same “expert” who assured the Orlando Sun-Sentinel after the revelations of the 9/11 killers’ extra-curricular activities:

“It is incomprehensible that a person could drink and go to a strip bar one night, then kill themselves the next day in the name of Islam,” said Ayoub. “People who would kill themselves for their faith would come from very strict Islamic ideology. Something here does not add up.”

Indeed – in the same way that a nutjob who hangs out with Ukrainian “nurses” and a bevy of Austin Powers fembots would hardly have enough “religious thought” to fill a book, would he?