A 4-person delegation from Public Safety Canada, including Islamist Hussein Hamdani, went to Maryland to talk about the terrorist threat

On October 8th, 2014, the International Cultural Center invited American and Canadian experts in Montgomery Village (Maryland) to talk about the terrorist threat posed by the Islamic State (ISIS) to the United States. The theme of the evening was Understanding the ISIS Threat to the Homeland.

An article published by Point de Bascule four days before the meeting highlighted that two of the guest speakers, Rabia Chaudry and Hussein Hamdani, were linked to the Hamas’s North American support network and, therefore, could not be counted as allies against the terrorist threat.

As indicated in the program of the event (reproduced at the end of this article), a 4-person delegation from Public Safety Canada join with Montgomery County Police Chief Thomas Manger and other American personalities to talk about the terrorist threat:

Angus Smith – RCMP analyst active in the field of counter-terrorism in Canada. In 2009, he authored Words Make Worlds for the RCMP. This document was conceived to get police officers to stop using Islamic concepts when they describe or refer to the Islamist threat.

Charlene Larose – Director of Citizen Engagement at Public Safety Canada, including responsibility for the Cross-Cultural Roundtable on Security

Hussein Hamdani – In spite of his association with many Muslim Brotherhood-linked organizations, including three whose charitable status were revoked by the Canada Revenue Agency for their involvement in the funding of terrorism, Hamdani is still a member of the Cross-Cultural Roundtable on Security. He also collaborates with the Muslim Association of Canada in spite of its open support for Hamas in 2004, more than one year after it was added to a list of outlawed terrorist organizations by Public Safety Canada, the very department advised by Hamdani on security matters.

Here are three of the messages published on Twitter about the meeting held in Montgomery Village under the hashtag #ISISthreat. 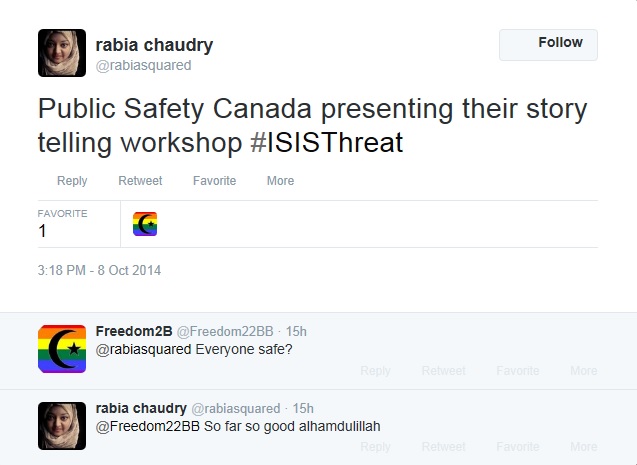 ***Mehreen Farooq: So this one time a Mounty and the Montgomery Co Chief of Police entered the room… #ISISthreat

Chief Manger has been the Chief of Police in Montgomery County, Maryland, since February 2004. A Maryland native, Chief Manger attended Montgomery Blair High School and graduated from the University of Maryland in 1976 with a B.A. in Criminal Justice. Chief Manger began his law enforcement career in 1977 with the Fairfax County (Virginia) Police Department. He rose through the ranks to become Chief of Police in 1998. During his tenure in Fairfax County, Chief Manger received numerous awards including the Silver Medal of Valor. Chief Manger is credited with reorganizing and expanding the Fairfax County Police Department’s Community Policing efforts. His commitment to the highest ethical standards for policing and his enactment of new policies to increase departmental accountability earned significant recognition from the community.

Dr. Hedieh Mirahmadi is the President of the World Organization for Resource Development and Education (WORDE), Founder of the International Cultural Center (ICC), and Co-Chair of the Montgomery County Executive’s Faith Community Working Group. She is a world renowned expert in community-based programming that promotes social cohesion and builds resilience against violent extremism. In authority in this field for two decades, Dr. Mirahmadi has briefed numerous policymakers both in the US and abroad, and has presented at conferences organized by Public Safety Canada, US Department of Defense, US Congressional Anti-Terrorism Caucus, the Federal Bureau of Investigations, the National Fusion Center, the National Counter-Terrorism Center, and the Director of National Intelligence. Dr. Mirahmadi also serves on the Montgomery County Collaboration Council for Children, Youth and Families. She earned her Juris Doctorate from University Southern California.

Rabia Chaudry is a National Security Fellow at the new America Foundation, a Fellow of the Truman National Security Project, and the President of the Safe Nation Collaborative, a law enforcement training firm focused on cultural competency and Countering Violent Extremism (CVE). Rabia is also a CVE consultant with agencies and institutions. She is an attorney with over a decade of experience in immigration and civil rights law and serves on the board of the ACLU of Maryland. Rabia is a frequent writer and speaker on violent extremism, Islam, American Muslims, gender issues, and interfaith perspectives.

Mehreen Farooq is a Senior Fellow with the World Organization for Resource Development and Education (WORDE). At WORDE, Farooq joins a team of specialists who work with Muslims throughout the world to build community resilience against violent extremism. Farooq’s current projects include researching the capacity of civil society in Afghanistan and Pakistan to promote peace. Since 2011, she has traveled to approximately 75 cities and villages in the region to interview hundreds of youth activists, religious scholars, and tribal elders to explore their peacebuilding initiatives. Recently, Farooq began research with an evaluations assessment team to examine the efficacy of US Government-funded CVE programs.

Charlene Larose started her career with Canada’s Public Service when she joined the Department of Canadian Heritage in 1999. In July 2007, Ms. Larose took on the role of Director of Citizen Engagement at the Department of Public Safety, including responsibility for the Cross-Cultural Roundtable on Security (CCRS) – an advisory body of Canadian citizens to the Ministers of Public Safety and of Justice on national security issues. As Director of Citizen Engagement, Ms. Larose also oversaw the development and implementation of the Communities at Risk: Security Infrastructure Pilot Program – a funding program for communities at risk of hate-motivated crime, as well as the Air India Memorials Program – a program dedicated to building memorials in honour of the victims of Canada’s worst act of terrorism.

Nathalie Filion is currently the Manager of the Cross-Cultural Roundtable on Security at the Department of Public Safety Canada. She has extensive experience with social programs within and across Federal government departments. Prior to her work in the government, Ms. Filion worked as a research analyst for the association of independent music producers of Québec, and a journalist and researcher for several publications and radio in Canada and abroad. Ms. Filion holds a B.A. in Communications and Journalism from the University of Moncton and a M.A. in International Relations and Affairs from Université Laval. She is a graduate of the Third Party Neutral Program of the Canadian Institute for Conflict Resolution, focusing on community conflict resolution. Ms. Filion is of Aboriginal ancestry.

Angus Smith has been an intelligence analyst with the RCMP for 25 years. Mr. Smith worked on a number of files, including drugs, organized crime and anti-corruption before taking up national security-related duties after 9/11. Mr. Smith has also worked in Eastern Europe and Latin America and often lectures on intelligence and NS-related matters. He has particular interests in the Middle East, radicalization to violence and countering violent extremism. Mr. Smith is currently seconded to Public Safety Canada, where he serves as a Senior Special Advisor in the National Security Policy Directorate.

Hussein Hamdani of Ontario holds a Bachelor of Law from the University of Western Ontario and a Master of Arts in International Relations from the University of Toronto. Mr. Hamdani is currently a Barrister and Solicitor with Simpson Wiggle LLP and a law instructor at Niagara College. He also serves as a Public Relations Officer with the Halton Islamic Association and a Senior Advisor to the Muslim Youth of North America Organization. Mr. Hamdani is a Director on the Board of the Hamdani Foundation of St. Catharines and the Settlement and Integration Services Organization of Hamilton. He co-coordinated the Toronto Muslim Summit in 2003 and is a founding member of the Ihya Foundation.