CBC «AS IT HAPPENS» LOSES THE JIHAD TRAIL

“We seek out the truth in all matters of public interest,” declares the taxpayer-funded Canadian Broadcasting Corporation (CBC) in its “Mission and Values” statement [Screenshot of CBC page is archived on PdB HERE]. But do they really?

March 10, 2011 marked the launch of long-awaited United States Congressional hearings into “The Extent of Radicalization in the American Muslim Community and That Community’s Response.” Called by Homeland Security Committee Chair Peter King, the hearings are a response to extremist Islam’s war against the United States and the West, and to growing concerns about the number of terror plots involving “homegrown” Muslim Americans.

These proceedings reflect the need to explore disturbing statistics about allegedly-lukewarm Muslim community support for counterradicalization campaigns and law enforcement’s counterterror efforts. There had been worries, too, with serious evidentiary foundations, about the role played by certain self-styled Muslim representative groups in encouraging divisive and inaccurate persecution narratives likely to contribute to Muslim alienation and radicalism.

And so, on March 10, 2011, producers of CBC Radio’s ninety-minute-long weekday current affairs program, As It Happens, decided to make the Congressional hearings the lead item.

A few hours before the show, As It Happens’ Facebook site advertised the program under the somewhat sly title, “Radical Hearings”. “We hear from Alejandro J. Beutel, Muslim Public Affairs Council,” promised the CBC’s blurb.

Despite the serious, evidence-gathering purpose of the Congressional project – an initiative slated to include a number of supportive Muslim Americans – the CBC program seemed determined to undermine the Committee’s credibility and attribute to it anti-Muslim motivations. The sole nod to the Committee Chair’s widely-shared perspective, was a brief excerpt from Representative King’s opening statement. The clip omitted King’s careful assurances that “the overwhelming majority of Muslim-Americans are outstanding Americans and make enormous contributions to our country.”  To the surprise of specialists, CBC editors also left out the Chair’s dignified and fact-based condemnation of the Council on American-Islamic Relations (CAIR), a fundamentalist Islamic group that had organized opposition and a weeks-long campaign against the Committee hearings. Those aware of CAIR – its Canadian arm is CAIR-CAN – had little difficulty understanding its nervousness about scrutiny.

Ms Carol Off, As It Happens’ show host, was apparently satisfied to have Mr Beutel as her sole guest and interpreter of events, and began the segment by invoking McCarthyism in a series of softball questions. Off asked nothing about MPAC, Mr Beutel’s organization, a group whose flawed report on Muslims’ cooperation with authorities, was routinely cited by hearing opponents. Nor about the role of CAIR in misportraying the hearings and stampeding some Muslims and a few mainstream rights’ groups, like the ACLU, into panicked attacks on the Committee mandate.

Nary a mention, either, of CAIR’s multi-year First Amendment-breaching campaign of lawsuits against working journalists and others trying to investigate CAIR’s origins, doctrine and connections.

And when Muslim Congressman Keith Ellison’s tearful testimony was played for Beutel’s comment, the MPAC representative was not asked about the significance of Representative Ellison’s reputation as “CAIR’s Congressman”. Beutel was, however, given the opportunity to advertise and promote his status as the Muslim son of a Jewish father and Catholic mother.

Minutes before the program, David B. Harris, a Canadian lawyer and terrorism specialist with three decades of intelligence experience, saw CBC’s Facebook pre-broadcast publicity, and posted an immediate response at the website. Within about two hours, this response had disappeared from the site – but only after Point de Bascule staff captured it for the record.

Those familiar with the Canadian Broadcasting Corporation’s “Mission and Values” statement can read Harris’s text, below. They can then decide for themselves whether its removal was in line with the public broadcaster’s professional standards, including its obligation to seek out “truth in all matters of public interest.”

David Harris: ‎”As It Happens'” should undertake a rigorous review of some of the sources and interviewees upon whom it relies when dealing with issues relating to radical Islam.

A lengthy study by the respected Investigative Project on Terrorism (IPT), Washington, DC, documents the divisive and radical tendencies of the Muslim Public Affairs Council (MPAC). Yet AIH producers are enthusiastically advertising their plans to have an MPAC official figure prominently in today’s As It Happens’ coverage of the Congressional counterradicalization hearings. 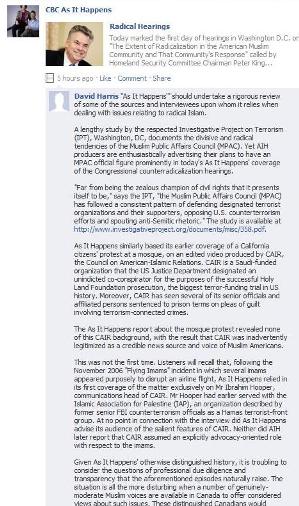 “Far from being the zealous champion of civil rights that it presents itself to be,” says the IPT, “the Muslim Public Affairs Council (MPAC) has followed a consistent pattern of defending designated terrorist organizations and their supporters, opposing U.S. counterterrorism efforts and spouting anti-Semitic rhetoric.” The study is available on the Investigative Project website at  http://www.investigativeproject.org/documents/misc/358.pdf.

As It Happens similarly based its earlier coverage of a California citizens’ protest at a mosque, on an edited video produced by CAIR, the Council on American-Islamic Relations. CAIR is a Saudi-funded organization that the US Justice Department designated an unindicted co-conspirator for the purposes of the successful Holy Land Foundation prosecution, the biggest terror-funding trial in US history. Moreover, CAIR has seen several of its senior officials and affiliated persons sentenced to prison terms on pleas of guilt involving terrorism-connected crimes.

The As It Happens report about the mosque protest revealed none of this CAIR background, with the result that CAIR was inadvertently legitimized as a credible news source and voice of Muslim Americans.

This was not the first time. Listeners will recall that, following the November 2006 “Flying Imams” incident in which several imams appeared purposely to disrupt an airline flight, As It Happens relied in its first coverage of the matter exclusively on Mr Ibrahim Hooper, communications head of CAIR. Mr Hooper had earlier served with the Islamic Association for Palestine (IAP), an organization described by former senior FBI counterterrorism officials as a Hamas terrorist-front group. At no point in connection with the interview did As It Happens advise its audience of the salient features of CAIR. Neither did AIH later report that CAIR assumed an explicitly advocacy-oriented role with respect to the imams.

Given As It Happens’ otherwise distinguished history, it is troubling to consider the questions of professional due diligence and transparency that the aforementioned episodes naturally raise. The situation is all the more disturbing when a number of genuinely-moderate Muslim voices are available in Canada to offer considered views about such issues. These distinguished Canadians would include Dr Farzana Hassan, Dr Mahfooz Kanwar, Dr Salim Mansur, Raheel Raza, Tarek Fatah, Salma Siddiqui and Sohail Raza.

To understand radicalization, it is best to talk to a few moderates, once in a while.

What else did CBC “As It Happens” miss? For those wanting information about the flawed MPAC report cited by Representative Ellison and others objecting to the King Committee hearings on radicalism [ see http://www.investigativeproject.org/2390/mpac-stats-not-supported-by-facts]. The MPAC report and other distorted analyses are discussed at http://www.investigativeproject.org/2672/witnesses-keep-touting-flawed-studies.

The following day, show host Carol Off and Jeff Douglas reported the show was produced by:

FRIDAY GOODBYES That’s it for As It Happens for this Friday, March 11th.This is when we thank all the people who helped put this program together. The show was produced this week by: Laurie Allan, Diane Eros, Natasha Fatah, Daniel Guillemette, Phil Heidenreich,Chris Howden, Adam Killick, Pacinthe Mattar, David McDougall, and Carolyn Morris. Our technician is Reynold Gonsalves. The show director is Kevin Ball. Daemon Fairless is our writer this week.Robin Smythe is the Senior Producer. And the Executive Producer of As It Happens is Lynda Shorten.We’d also like to thank some other people who helped us out this week: Mary Lynk in Halifax, Sarah Buck and Susan McKenzie in Montreal, Neil Morrison in Ottawa, and Yvonne Gall in Vancouver.