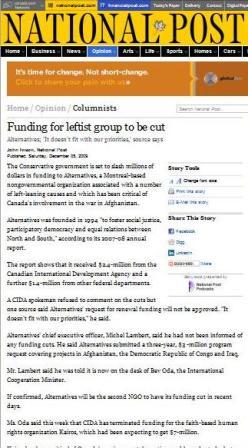 The Conservative government is set to slash millions of dollars in funding to Alternatives, a Montreal-based nongovernmental organization associated with a number of left-leaning causes and which has been critical of Canada’s involvement in the war in Afghanistan.

Alternatives was founded in 1994 “to foster social justice, participatory democracy and equal relations between North and South,” according to its 2007-08 annual report.

The report shows that it received $2.4-million from the Canadian International Development Agency and a further $1.4-million from other federal departments.

A CIDA spokeman refused to comment on the cuts but one source said Alternatives’ request for renewal funding will not be approved. “It doesn’t fit with our priorities,” he said.

Alternatives’ chief executive officer, Michel Lambert, said he had not been informed of any funding cuts. He said Alternatives submitted a three-year, $3 -million program request covering projects in Afghanistan, the Democratic Republic of Congo and Iraq.

Mr. Lambert said he was told it is now on the desk of Bev Oda, the International Cooperation Minister.

If confirmed, Alternatives will be the second NGO to have its funding cut in recent days.

Ms. Oda said this week that CIDA has terminated funding for the faith-based human rights organization Kairos, which had been expecting to get $7-million.

Kairos has been critical of Canada’s environmental practices and has adopted what one critic called “one-sided” resolutions on the Middle East. Alternatives’ latest annual report says the organization has challenged the Canadian government to pressure Israel to end attacks against Palestinians; has criticized Canada’s intervention in Afghanistan for being “too militarized”; and has encouraged dialogue with the Taliban.

Alternatives runs a number of programs, in Canada and abroad, including environmental, communications, peace promotion and “social justice” programs.

Ottawa is understood to be particularly unhappy about an education camp the NGO organized in August 2008. The event, at Saint-Alphonse de Rodriguez in Quebec, featured “500 motivated militants” invited from countries such as Lebanon, Iraq, “Palestine” and Venezuela. Sources said the government is also concerned that Alternatives’ board includes supporters of Hezbollah and Hamas, such as Ali Mallah, vice-president of the Canadian Arab Federation.

Mr. Mallah has in the past said that Hezbollah is a “symbol of the struggle against Israeli oppression, injustice and occupation,” while the CAF has called on the Canadian government to remove “legitimate political parties” such as Hamas and Hezbollah from the list of banned organizations. Mr. Mallah, who is also an active CUPE and NDP member, did not return calls seeking comment.

Tom Quiggin, who has 20 years’ experience in the Canadian intelligence community and is now a board advisor for Global Brief magazine, said he has noted an increasing convergence between the hard left and supporters of organizations such as Hamas and Hezbollah, which have been declared terrorist organizations by the Canadian government.

“A number of these organizations may have been legitimate when they started up, but they have overstepped their mandate with highly partisan attacks that have resulted in the government kicking back,” he said.

The cut to Alternatives’ budget comes just as the government has tabled a report from a panel of experts on the future of a new democratic promotion agency, which the Conservatives pledged to establish in the last Speech from the Throne.

The panel, chaired by Pierre Trudeau’s former principal secretary Tom Axworthy, suggested that the government set up a $30-70-million agency called the Canadian Centre for Advancing Democracy, which would seek to establish or strengthen democratic institutions in countries where they are absent or need further encouragement.

The report suggested that the agency develop its own programs and field offices in a limited number of target countries linked to the Francophonie, the Commonwealth and the Americas.

“These countries should reflect Canadian priorities,” the panel recommended.

You can also read:

Report from the Northern Front: Montreal ReduxRead more at: http://www.investigativeproject.org/789/report-from-the-northern-front-montreal-redux

Islamism and the Infiltration Challenge

HARRIS CONDEMNS ISLAMIST CAIR-CAN AND ITS APOLOGIST, THE TAXPAYER-FUNDED CENTRE FOR FAITH AND THE MEDIA

Barbara Kay, Quebec shock jock is accused by the usual suspects of a hit job on a hijab