VIDEO – Jack Layton rejected sharia law for Canada during the 2011 electoral campaign: “We don’t want to see a religious legal structure being laid over top of our laws here in Canada.” 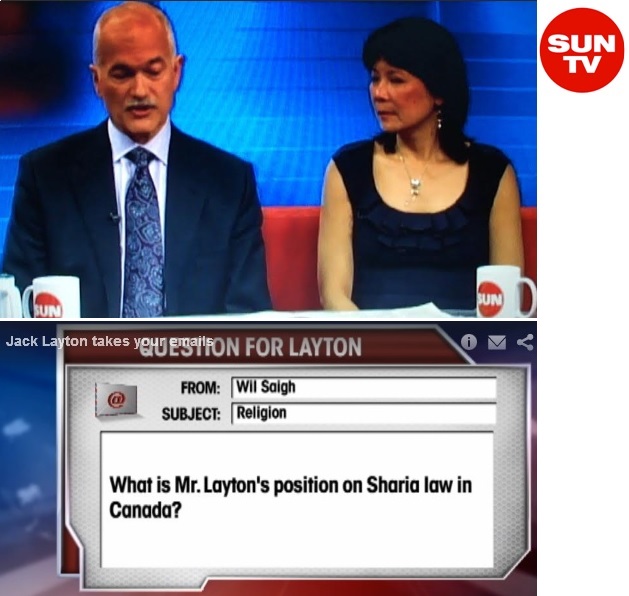 During the 2011 electoral campaign, NDP leader Jack Layton made a stop at Sun TV and was interviewed by Pat Bolland and Alex Pierson during their April 21 morning show. The TV hosts also took questions from the public. One viewer asked Jack Layton to give his position on the application of sharia law in Canada.

JACK LAYTON: We would have a concern about that. No question about that and I’ve expressed that.

ALEX PIERSON: What would your major concern then be?

JACK LAYTON: Well, fortunately, we don’t really have a big issue, here, right now. We have our own laws here that are in operation and we don’t want to see a religious legal structure being laid over top of our laws here in Canada.

The insistence of Islamist militant Zunera Ishaq to take her Canadian citizenship oath with her face covered by a niqab does constitute an attempt to impose sharia rules over Canadian ones.

On her Facebook page, Ms. Ishaq lists the Islamic Circle of North America (ICNA) as one of her favorite organizations.

ICNA was established to disseminate the ideas of Syed Maududi in North America. Maududi established the Jamaat-e-Islami (JEI) in 1941 as a close ally of the Muslim Brotherhood in Pakistan, India and Bangladesh. The close relationship between ICNA and the JEI is not contested. Opponents of the organization, such as The Investigative Project on Terrorism and ICNA’s fellow travelers, such as John Esposito (2009 – 2012), in his Dictionary of Islam, have highlighted their close relationship in the past.

In 2012, Sun TV reported that Maududi’s book Jihad in Islam, promoting a worldwide Islamic revolution, is being distributed by ICNA in Canada. Click on the image to view the Sun TV report.

Syed Maududi in Jihad in Islam: Islam wishes to destroy all States and Governments anywhere on the face of the earth which are opposed to the ideology and programme of Islam regardless of the country or the Nation that rules it. […] Islam requires the earth – not just a portion – but the whole planet.

In his book Purdah and the status of women in Islam, Maududi discussed the issue of the niqab and stressed that women must hide their face when they are outside the house:

(p.134) This verse [33:59] especially enjoins the covering of the face. This may be done either by drawing a part of the outer garment in front of the face, or by a veil, or in some other way. The Qur’an says that when the Muslim women go out thus covered, they will be considered as respectable women, and not as lewd ones, and therefore nobody will think of molesting them.

In July 2014, when Abu Bakr Al-Baghdadi made his speech at the Mosul Great Mosque declaring the creation of an Islamic state with himself as its caliph, the Guardian / Archive.Today reported that Al-Baghdadi “quoted at length from the Indian / Pakistani thinker Abul A’la Maududi, the founder of the Jamaat-e-Islami party in 1941 and originator of the contemporary term Islamic state.”

In February 2015, an Iraqi news agency reported / JihadWatch that the Islamic State disfigured 15 women with acid for not wearing the niqab.

On July 7, 2015, Mississauga News reported that an NDP candidate and a Liberal candidate in the area had taken part to activities organized by ICNA earlier that month.

Discover the Networks: Profile of the Islamic Circle of North America

GMBDW: Profile of the Islamic Circle of North America

Pamela Geller (April 4, 2014): ICNA: Jihad is waging war “so that only the ‘evil sovereignty of beings other than Allah is wiped out’”

Point de Bascule (June 18, 2015): Gilles Duceppe does not question the pipeline bringing Saudi oil (among others) to Montreal via Portland. Could he change his mind about a pipeline that would bring Canadian oil to Montreal? [Article in French]

Conclusion: Quebec has to choose between two supplies of oil that will arrive by pipeline. One is from Portland (Maine) and the other one is from Western Canada. Quebec must choose the supply of oil whose sales will not fund those who threaten its security and its way of life.