On May 20, 2011, La Presse revealed that Rue Frontenac is being sued by Montreal-based Dar al-Iman school. The reasons behind the suit were not mentioned in the article. It is more than likely a libel suit.

The Muslim Association of Canada’s (MAC) own publications identify the school as a “MAC institution”. From 2002 to 2010, the documents submitted by MAC to the Canada Revenue Agency identify Lazhar Aissaoui as a member of the organization’s board of directors. From 2007 to 2010, he is specifically identified as the organization’s treasurer.

This information is of great importance because it confirms that Aissaoui was in charge of transfering funds from MAC to three organizations with some members who have been involved in terrorism in the past. In April 2011, just weeks after Rue Frontenac’s revelations, the Government of Canada has permanently revoked the charitable status of IRFAN-Canada, one of these three organizations, precisely because it had transferred millions to the terrorist organization Hamas in the past. (Toronto Star – GMBDR)

How much of the money transferred to IRFAN-Canada by MAC’s treasurer, Lazhar Aissaoui, ended up in Hamas’ coffers?

On MAC’s website (Archives PdeB), it is stated that “MAC adopts and strives to implement Islam, […] as understood in its contemporary context by the late Imam, Hassan Albanna [1906 – 1949] the founder of the Muslim Brotherhood. MAC regards this ideology as the best representation of Islam as delivered by Prophet Muhammad.”

A summary of Hassan al-Banna’s doctrine is available in the 50-point manifesto that he sent to several Arab political leaders in 1947. It was republished on the Muslim Brotherhood’s website in 2007. The manifesto promotes the abolition of political parties and the establishment of a single party system, the modification of existing laws to conform them to shariah, the multiplication of associations dedicated to promoting the spirit of jihad amongst the youth, the closure of dance halls and the censorship of movies, plays and so forth. In his manifesto, al-Banna stated his intention to impose a unique dress code to the entire population.

In the days ahead, we plan to publish a more elaborate article that will place the suit initiated by Dar al-Iman school against Rue Frontenac in the context of the information published by Point de Bascule since November 2010. In the meantime, we invite you to consult our Dar al-Iman dossier.

In Canada, tribunals rely on the decision rendered by the Supreme Court in the Grant v. Torstar Corp.., 2009 SCC 61, [2009] 3 SCR 640 case to determine the boundary between freedom of expression and defamation. For those wishing to get acquainted with the principles of law discussed in the case, the ruling is available on CanLII. The law firm McCarthy Tétrault also offers a summary of the case.

The Quebec Department of Education delegates the supervision of private schools to the Commission consultative de l’enseignement privé (Advisory Commission on Private Education). In the Commission’s 2007-2008 Annual Report (page 86), it is specified that the Dar al-Iman’s 5-year operating permit will expire on June 30, 2011. 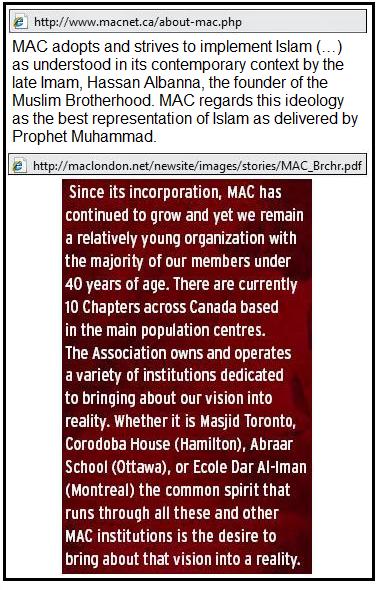