On January 31, 2017, The New York Times published an article on the shooting at the Islamic center in Quebec City in which Point de Bascule was described as “anti-Muslim” and a “less-tolerant voice.”

Point de Bascule’s director sent a reply to The New York Times. It was published on February 8, 2017.

Our reply is very short (less than 175 words) in accordance with The New York Times’ policy regarding the right of reply. We will publish a more elaborate reply in the coming days.

I disagree with the characterization of Point de Bascule, the website of which I am the director, as a “less tolerant” voice.

The implication that we are anti-Muslim does not correspond with our track record. Our efforts have focused not on Muslims in general but on leaders and organizations promoting Shariah and Islamic supremacism. While we are anti-Islamist, we are open to the idea that Muslims can embrace democratic values; this is why very early on, in 2008 and 2010, we organized public meetings with Muslim activists opposed to Shariah.

All Quebecers mourn the deaths of the six worshipers killed by a gunman late last month in the Quebec City mosque tragedy. This is not, however, inconsistent with dedication to the necessary vigilance and information-gathering on jihadists and other Islamic supremacists.

Point de Bascule (March 5, 2012): The CCIQ, Hamas and the project of new mosque in the Saint-Sauveur district in Quebec City [Article in French]

Point de Bascule (March 6, 2012): Excerpts of what is advocated by Islamist ideologues endorsed by the CCIQ [Article in French] 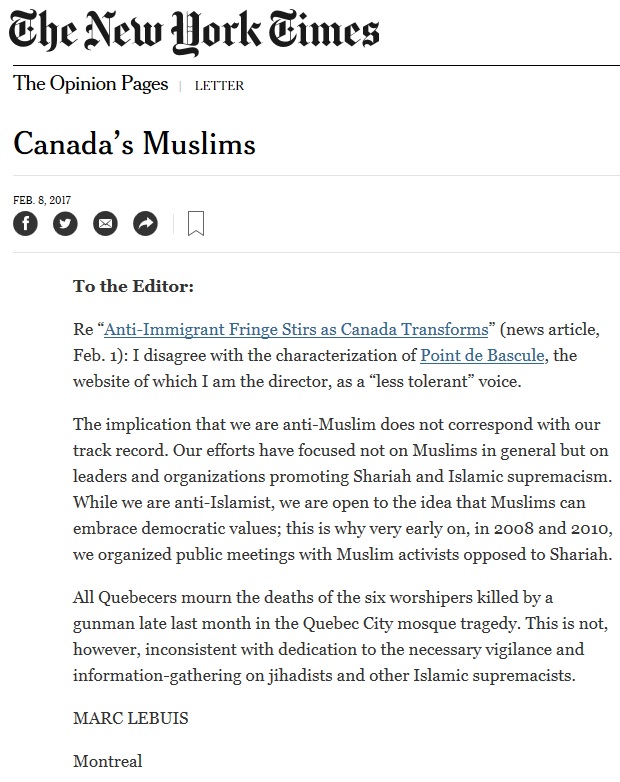