Quebec administrative tribunal rules that MAC will have to pay property taxes for its building on Belmont St. in downtown Montreal 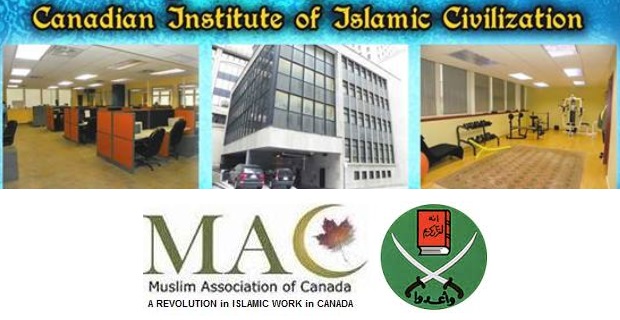 The upper part of the image comes from the announcement of a 2014 fundraising activity that was organized by the Muslim Association of Canada (MAC) for its Canadian Institute of Islamic Civilization located in its building on Belmont St. in downtown Montreal. For the occasion, Ahmad Kendile (also: Kandil, Qandeel) had been invited as speaker. In a 2013 sermon given at MAC’s Al-Rawdah mosque in Montreal, Imam Kandil advocated that those leaving Islam should be killed or jailed to death by the authorities of an Islamic state.

On January 18, La Presse reported that the Muslim Association of Canada (MAC) will have to pay property taxes for its building on Belmont St. in downtown Montreal. The Quebec Municipal Commission’s ruling released on September 28, 2016 is available on CanLii / Archive.Today.

The ruling is based on the fact that “[Translation PdeB] The building is mostly used for religious activities” (Section 33) but it is not a type of use listed in the Act respecting municipal taxation (section 243.8) that can lead to an exemption of property taxes.

MAC was represented by Lazhar Aissaoui before the tribunal. From 2002 to 2010, Mr. Aissaoui was a director of the Islamist organization, then its treasurer according to MAC’s file available at the Canada Revenue Agency. In the September 2016 ruling, Mr. Aissaoui is identified as the “president of MAC’s management committee.”

In 2009, Lazhar Aissaoui succeeded in getting property tax exemptions for two others buildings owned by MAC which he was managing: the Aboubakerseddik Centre on Saint-Denis St., which houses a halal certification agency, among others, and the Al-Rawdah Mosque / CCL Centre on Laurentien Blvd. Both rulings can be accessed by clicking on the names of the buildings.

Mr. Aissaoui became responsible for the building on Belmont St. after its initial manager, Chiheb Battikh, was sent to jail for the kidnapping for ransom ($500,000) of the grandson of a rich businessman in a Montreal park.

Point de Bascule (February 22, 2013): CHIHEB BATTIKH – An overview of the Muslim Association of Canada and the other Islamist organizations run by the alleged Montreal kidnapper