The booklet United against terrorism that was produced by Shahina Siddiqui and her National Council of Canadian Muslims praises jihad as ‘noble’ (pp. 17 & 34) and endorses numerous radical Muslim scholars, including Siraj Wahhaj who advocated converting to Islam youth who felt excluded, and eventually arming them with Uzi submachine guns so that they can wage jihad in U.S. streets. (Point de Bascule – Muslim Mafia / pp. 136-137)

On June 10, 2015, shortly after the Government of Quebec presented several measures aimed at preventing radicalization, including a hotline for youth and families at risk, Montreal Gazette’s Catherine Solyom enquired and reported about the reaction of Shahina Siddiqui, the Winnipeg-based president of the Islamic Social Services Association and a board member of the National Council of Canadian Muslims (former CAIR-CAN). Ms. Solyom presented Shahina Siddiqui as an actor against radicalization without ever mentioning all the radical Islamist preachers whom she has been endorsing and inviting in the past.

According to Catherine Solyom, Shahina Siddiqui has been trying, unsuccessfully so far, “to secure the funding needed to start the same kind of hotline to reach youths and their families in Manitoba [and she has been trying to get] the backing of the Manitoba or federal government for her team of counsellors,” hence her interest for the Quebec initiative.

In her article, Ms. Solyom described Shahina Siddiqui as “one of the authors of a handbook produced in conjunction with the RCMP called United Against Terrorism.” However, Ms. Solyom chose not to report that, although it was involved with two Islamist organizations in the process that led to the production of the booklet, the RCMP withdrew its support to the booklet before its release. 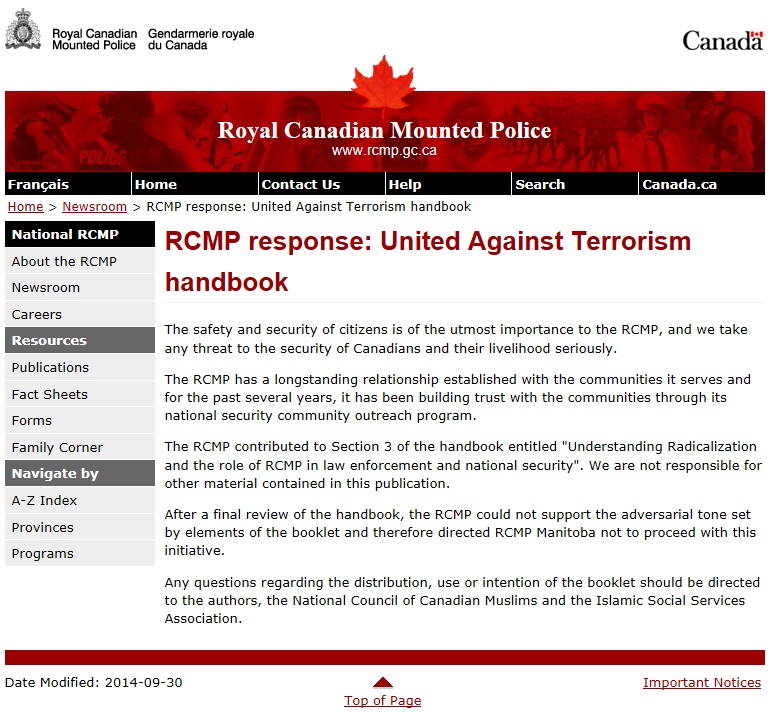 On September 30, 2014, the RCMP issued a press release explaining its rejection of the booklet in those terms: “After a final review of the handbook, the RCMP could not support the adversarial tone set by elements of the booklet and therefore directed RCMP Manitoba not to proceed with this initiative.”

The booklet United against terrorism that was produced by Shahina Siddiqui and her National Council of Canadian Muslims describes jihad as ‘noble’ (pp. 17 & 34) and endorses numerous radical Muslim scholars. In November 2014, Point de Bascule provided an overview of some radical positions taken by Muslim scholars praised by the authors for their “good understanding of life and Islam in North America.” On page 13, the authors of the booklet declare that they consult these radical scholars “to gain an accurate understanding” of Islam.

Here is a summary of some of the radical positions taken by ten of these scholars in the past:

SIRAJ WAHAJ: He incited to convert to Islam youth who felt excluded, and eventually to arm them with Uzi submachine guns so that they can wage jihad in U.S. streets. (Point de Bascule – Muslim Mafia / pp. 136-137)

JAMAL BADAWI: In an interview given in the early 2000s, he advocated that Muslims should become judges in North America and take advantage of their influential positions in order to stop applying current legal provisions that are incompatible with sharia.

ABDALLAH IDRIS ALI: He was listed as Secretary General of ISNA Development Foundation in the last financial statement that was produced before the organization’s charitable status was revoked by the Canada Revenue Agency (CRA). According to the CRA, the ISNA Development Foundation provided tax receipts to a second entity that transferred funds to a third entity whose armed wing wages jihad in India.

MUHAMMAD IQBAL MASOOD NADVI: This advisor to the National Council of Canadian Muslims (former CAIR-CAN) is close to the Jamaat-e-Islami (JEI). The Pakistan-based JEI’s founder Syed Maududi advocated the destruction of all non-Muslim states and governments from the face of the earth.

INGRID MATTSON: She praised Muslim scholar Syed Maududi for being the author of “probably the best work of Tafseer in English.” Maududi’s explanation of the Koran (this is what is provided by a tafseer) led him to advocate for the destruction of all non-Muslim states and governments from the face of the earth.

ZAID SHAKIR: He declared that “If better organized, Muslims could take over the U.S. in a very short period of time.”

YUSUF BADAT: He blamed the internet for the radicalization of young Muslims while disseminating around him books by Maududi that praise jihad and Islamic takeover.

HAMID SLIMI: He recommended a Saudi Koran that defines jihad as an “Islamic Holy War… with full force of numbers and weaponry… by [which] Islam is established [and] Allah’s Word is made superior.”

IHSAN BAGBY: He declared that “Ultimately we [Muslims] can never be full citizens of this country [the U.S.] because there is no way we can be fully committed to the institutions and ideologies of this country.” (The Muslims of America, p.115)

More information about these scholars is available in the article that Point de Bascule dedicated to the booklet United against terrorism: An Imam promoting armed jihad in U.S. streets and other radical scholars consulted by the NCCM (the former CAIR-CAN) “to gain an accurate understanding” of Islam.

In 1997, Shahina Siddiqui was involved in the organization of a 1-month long retreat for Muslim Students Association leaders operating in various North American universities. The event was held at the University of Manitoba. Siraj Wahhaj and Ihsan Bagby, two Islamist leaders endorsed in NCCM’s 2014 booklet, addressed the student leaders back then. Other Islamist speakers who were invited at the event that was organized by Shahina Siddiqui are worth mentioning:

JAAFAR IDRIS: In a 1975 lecture, Jaafar Idris incited North American Muslim student leaders who were gathered at a convention in Toledo (Ohio) to “Islamize” (Part 1 – Part 8) the countries where they operate. Idris was expelled from the U.S. in 2003 for visa violations.

AHMAD SAKR: According to his personal profile, Sakr was a “founding member and president of the Muslim Students’ Association of the U.S.A and Canada,” the first Muslim Brotherhood front that was established in North America in 1963. Sakr is currently a board member of IFANCA, one of the main halal certification agency in North America. Among the several possible reasons for the prohibition of pork in Islam that were provided by Ahmad Sakr in his book Pork – Possible reasons for its prohibition / WebArchive, one relates to Jews being transformed into swine:

Ahmad Sakr: “It is known that some of the children of Israel [Jews] regularly disobeyed Allah and as a result, were cursed. […] If the meaning of the Bible is taken into consideration, and one takes the meaning of the verse [5:60] of the Qur’an as a reality rather than allegory, then one may deduce the fact that swine and apes were perhaps human beings who were degraded and brought down into animals. This type of interpretation may also reinforce the idea of evolution, in the reverse direction. […] If this is true, one may be able to think about the wisdom of prohibition of swine as it was a human being who was degraded to an animal stage.”

According to her report, the mayor of Montreal and the province have not contacted Elmenyawi to discuss their latest initiatives to counter radicalization.

Once again, Ms. Solyom did not provide any background for Elmenyawi that could have helped her readers make up their minds on whether government officials should, in fact, be collaborating with him or not.

In 2004, Salam Elmenyawi tried to get an official endorsement from the Government of Quebec for the sharia council that he was establishing in Montreal.

At the time, Elmenyawi told Montreal’s Le Devoir that his sharia council was planning on getting advices directly from Muslim Brotherhood spiritual guide Youssef Qaradawi (al Kardaoui) in the future.

Mounia Chadi (Le Devoir – December 11, 2004): Pressure on the Government of Quebec in favour of an Islamic Court / WebArchive – Archive.Today [Article in French]

In the past, Youssef Qaradawi has advocated the conquest of the West by Muslims, he has endorsed the killing of Muslims who leave Islam (apostates), he has condoned female genital mutilations, and claimed that Hitler was sent by Allah to punish the Jews (video).

In his classic Priorities of the Islamic Movement (chapter 4), that is based on a speech that he gave in Algeria in 1990, Qaradawi states that resorting to force and coercion is legitimate to enforce Islam’s principles (“changing wrong by force whenever possible”). He also described the mosque as a political institution where participants are mobilized for jihad (“It must be the role of the mosque to guide the public policy of a nation, raise awareness of critical issues, and reveal its enemies. From ancient times the mosque has had a role in urging jihad for the sake of Allah”).

In conformity with a Muslim Brotherhood principle of operation already reported by the New York Times in February 1949, Qaradawi endorses the use of suicide bombers.

In an interview given to Montreal’s La Presse in 2003, Elmenyawi also justified that Salman Rushdie be killed for his novel The satanic verses.

Salman Rushdie was able to survive the death threat that was issued against him by the Ayatollah Khomeini in 1989 because of an important police protection. However, his translators and his editors were not so lucky. His Japanese translator, Hitoshi Igarashi, was murdered in 1991, his Norwegian publisher, William Nygaard, and his Italian translator, Ettore Capriolo, were seriously injured in failed assassination attempts. In the 1993 arson attack aimed at Turkish columnist Aziz Nesin who was trying to publish Rushdie’s book in Turkey, 37 persons died in the fire of the hotel where he was staying.

In January 2005, Ayatollah Ali Khamenei, the successor to Ayatollah Khomeini, reaffirmed that Salman Rushdie was an apostate who could be killed with impunity. In 2012, the Iranian Foundation close to the regime that promises to reward those who would kill Rushdie increased the reward to $3.3 million.

L’Express / Paris (September 18, 2012): 5 things to know about the fatwa against Salman Rushdie [Article in French]

‘Gatekeepers’ to the Muslim community

As mentioned earlier, the booklet United against terrorism, to which referred Catherine Solyom in her article, was launched by the Islamic Social Services Association and the National Council of Canadian Muslims (former CAIR-CAN). Shahina Siddiqui plays a leadership role in both organizations and was a key contributor to the booklet.

In his May 11, 2015 presentation in front of the Standing Senate Committee on National Security and Defence, Lorenzo Vidino, an expert on the Muslim Brotherhood, described the National Council of Canadian Muslims (to which he referred by its old name CAIR Canada that was misspelled CARE Canada in the Hansard) as an organization that was “created by individuals who have personal ties to different branches of the [Muslim] Brotherhood back in the Middle East and who have personal, financial, organizational and ideological ties to the movement.”

Vidino explained that the NCCM and other Muslim Brotherhood-linked organizations aimed at being acknowledged as the “gatekeepers” to the Muslim community by government officials and the media:

Lorenzo Vidino: “They [Muslim Brotherhood-linked activists] basically aim to be the gatekeepers to Muslim communities, so that whenever politicians, governments or the media try to get the Muslim voice, if there were such a thing, they would go through them. They are sort of the self-appointed leaders of Muslim communities.”

Recently, the Global Muslim Brotherhood Daily Watch (GMBDW) described the NCCM as “an organization which has changed its name in a blatant attempt to obscure its real origins.” GMBDW was referring to the fact that CAIR-Canada’s name change occurred after Judge Solis stated, in a 2009 American court case (pp. 14-15), that Washington-based CAIR, CAIR-Canada / NCCM’s mother organization, is linked to the terrorist organization Hamas. 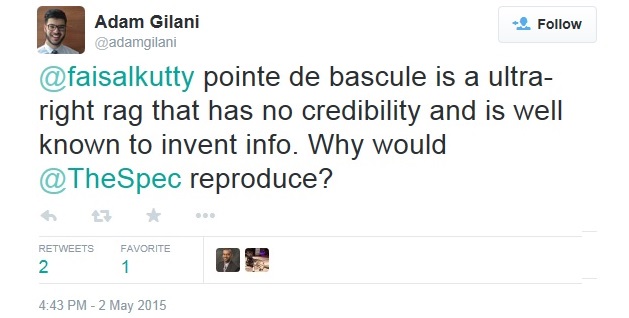 Adam Gilani: “@faisalkutty pointe [sic] de bascule is a ultra-right rag that has no credibility and is well known to invent info. Why would @TheSpec reproduce?”

Adam Gilani is a former president of the Muslim Students Association at the University of Ottawa (2011-2012). He recently criticized the Hamilton Spectator for referring to the Point de Bascule document that led to Hussein Hamdani’s suspension from his advising position at Public Safety Canada.