Iranian-trained Montreal imam Ali Sbeiti has passport revoked; he was once a ‘subject of interest’ in a national security investigation 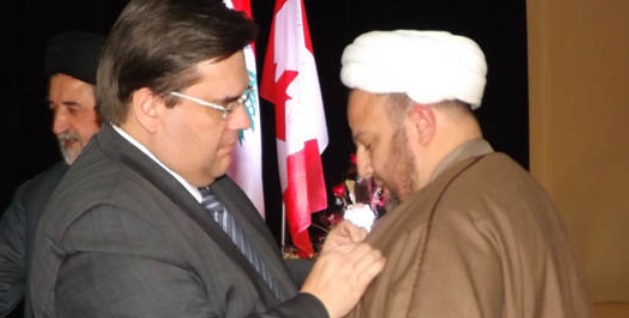 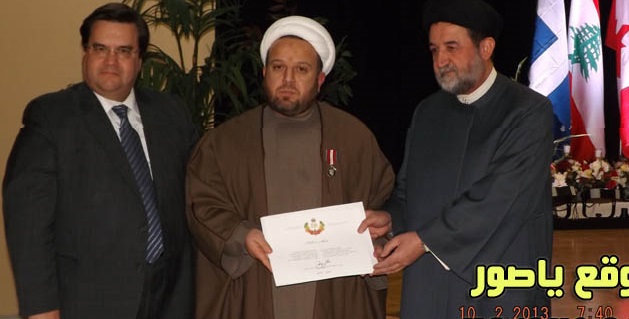 Denis Coderre, Ali Sbeiti and Sayed Nabil Abbas at the medal ceremony. In 2006, Imam Abbas was introduced as the Iraki Ayatollah Sistani’s representative in Canada. Iraqi Ayatollah Sistani tells Muslims who live in non-Muslim societies to obey the laws of the land “as long as doing so does not go against sharia law.” (Photo yasour.org)

Original title: Montreal imam has passport revoked; was once named as ‘subject of interest’ in probe

Federal officials have revoked the passport of an Iranian-trained Montreal imam once described by the RCMP’s Integrated National Security Enforcement Team as a “subject of interest in an ongoing investigation.”

Ali Sbeiti, who was born in Iraq but has been a Canadian citizen since 1991, was notified in a Nov. 19 letter that his passport had been “invalidated” and that Passport Canada was reviewing his “eligibility for passport services.”

The four-page letter from Citizenship and Immigration Canada advised Mr. Sbeiti he could no longer use his passport and that he had to return it immediately. While it cited federal regulations, the letter did not explain why the action was taken.

But internal government documents show that the Mounties have expressed interest in Mr. Sbeiti since 2009. He was also flagged by the Passport Canada security bureau after he altered his passport by trying to remove a sticker from one of the pages in 2007.

Mr. Sbeiti could not be reached for comment. His lawyer Mitchell Goldberg said he could not comment on the specifics of the case but that anyone advocating hatred or violence, or supporting terrorism, should be criminally charged. “None of us would want our passports to be revoked without even the right to know what allegations are being made against us, and the basic opportunity to give our side of the story,” he said, adding that fundamental rights included “the right to hold unpopular views.”

Citizenship and Immigration Minister Chris Alexander’s spokesman, Kevin Menard, said he could not comment on specific cases but that the government “will not hesitate to take action to protect Canadians from the threat posed by jihadi terrorists.”

The case is spelled out in documents filed last week in the Federal Court of Canada, where Mr. Goldberg is arguing the government “erred in law” by revoking the cleric’s passport “and denying him passport services for an unspecified time.”

In his application, Mr. Goldberg claimed the decision violated Mr. Sbeiti’s mobility rights and was based on “erroneous findings of fact it made in a perverse and capricious manner.” Passport Canada also failed to observe procedural fairness, he said.

The case is the latest test of federal regulations that allow the government to revoke or refuse passports on several grounds, including if it is deemed “necessary for reasons of the national security of Canada or another country.”

A 46-year-old Shi’ite cleric, Mr. Sbeiti was born in Najaf, Iraq, and studied religion in Lebanon and Iran, according to the Centre Communautaire Musulman de Montreal website, which identifies him as its imam, although a person who answered the centre’s phone said he no longer worked there.

“He immigrated to Montreal, Canada, in 1988 and went back to Qom, Iran, to continue his religious studies. Few years after he came back to Canada to serve the community,” it said. He founded “associations and community centres all across Canada,” including in Montreal, Ottawa, Toronto, Windsor, Edmonton and Vancouver, the CCMM biography said, adding he was an “active member of several committees and bodies involved in the community and religious activities across North America.”

According to Quebec corporate records, Mr. Sbeiti is president of the Association El-Hidaya, a Montreal non-profit group founded in 1997. The association’s address, according to provincial records, is the same as that of the CCMM.

In 2006, he told a self-styled “People’s Committee on Immigration Security Measures” about “his personal and community experiences of harassment” by the Canadian Security Intelligence Service, the Quebec activist group wrote in its report.

“He has been interviewed tens of times by CSIS (starting well before 11 September 2001), often for hours at a time,” and people who arrive in the country are regularly asked about him and whether they plan to attend his prayers; they are made to feel as though he is dangerous,” the committee’s report said.

Mr. Sbeiti “began having problems at airports” and complained about delays getting his boarding passes and being “asked to stand aside and wait while others were processed,” it said. “Eventually, he found out that he had been placed on the no fly list in the United States and that this was affecting him even when he was flying in Canada.”

When he tried to enter the United States, he was “arrested, handcuffed and put in a cell for six or seven hours” before being sent back to Canada, it said. “Next he was told by his bank that Canadian authorities wanted to make inquiries into his finances.”

His “Security Case History Sheet” at Passport Canada shows that in 2007 his passport was damaged when he tried to remove “a sticker.” He said it had happened in Saudi Arabia and denied he had attempted to remove a visa from his passport, which was later seized at Montreal’s Trudeau airport on the grounds it had been altered.

Two years later, on Aug. 31, 2009, the RCMP INSET in Montreal asked the passport office to “flag” Mr. Sbeiti since he was “of interest” to the section. The passport he used at that time had several entry and exit stamps from Lebanon, as well as an Iranian visa and indicates he had travelled to Kuwait, Saudi Arabia, Australia, the United Arab Emirates and Turkey.

When Mr. Sbeiti applied for a new passport in 2012, INSET again told Passport Canada it was interested in him. “As previously discussed, we would like to obtain a copy of the subject’s passport application and any other information you have concerning his application. He is a subject of interest in an ongoing investigation,” Samuel Mikhail of the Montreal INSET wrote in a Sept. 5, 2012 email.

Despite the RCMP’s query, Passport Canada received “no response from law enforcement” and issued a new passport to Mr. Sbeiti two weeks later, allowing him to travel to Lebanon via Paris. An internal email said he was not to be told he was a subject of police interest.

Seven pages of Mr. Sbeiti’s Passport Canada file were blacked out before being placed in the court record. The government said it intended to challenge the disclosure of the information under the Canada Evidence Act.