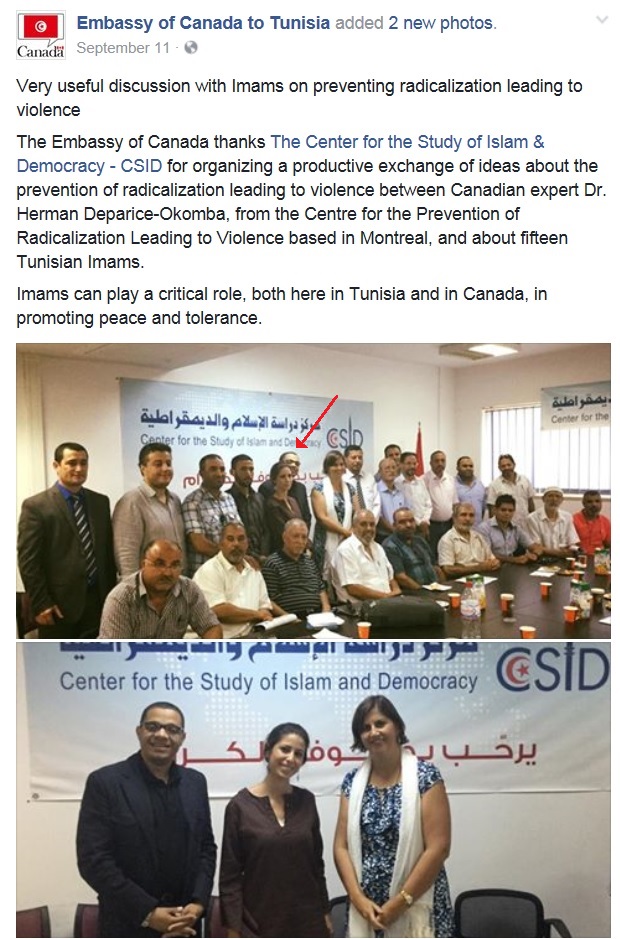 In the bottom photo, Herman Deparice-Okomba (LEFT), a member of the Quebec-UNESCO Radicalization conference expert committee and Carol McQueen (RIGHT), Ambassador of Canada to Tunisia

On September 11, 2016, the Embassy of Canada to Tunisia thanked the Center for the Study of Islam & Democracy (CSID) “for organizing a productive exchange of ideas about the prevention of radicalization” between Herman Deparice-Okomba and about fifteen Imams in Tunisia.

On May 26, Radio-Canada had announced that Mr. Deparice-Okomba had been appointed by the Government of Quebec on the expert committee of a Quebec-UNESCO conference on ‘Internet and the radicalization of youth’ scheduled to take place in Quebec City from October 30 to November 1.

CSID, which greeted Mr. Deparice-Okomba in Tunisia, is closely linked to the Muslim Brotherhood infrastructure. It has offices in Washington and Tunis. Last year, the Tunisian media Kapitalis described the CSID leader, Radwan Masmoudi, as “this lobbyist close to the Islamist party Ennahda and the Muslim Brotherhood network.” According to the Center for Islamic Pluralism, “The Center for the Study of Islam and Democracy (CSID) is a Washington-based think tank that professes to support moderate Islam, with a target audience primarily in the U.S. Government. […] CSID is a front for some of the most obnoxious members of the ‘Wahhabi lobby’ in America.”

Radio-Canada recently highlighted that the conference being coordinated by Mr. Deparice-Okomba “will not address directly the issue of Islamic radicalism.” According to UNESCO official Indrajit Banerjee, “[Point de Bascule translation] It is pointless to single out a group or a religion in particular because the problem is much more widespread. It could concern gangs in Latin America or those opposing the arrival of immigrants in Europe.”

Shortly after the announcement of the ‘Internet and radicalization’ conference by the Government of Quebec in January 2016, Point de Bascule published an article highlighting the following points:

On October 11, the Journal de Québec reported that the Government of Quebec is refusing to communicate the list of speakers who will address the conference at the end of October. A government spokesperson justified this refusal by invoking “the sensitiveness of the topics” that will be discussed.

Given that Point de Bascule and others have highlighted the links of Quebec government advisors with Islamists in the past, isn’t the government simply trying to prevent that the background of its speakers be examined instead? How many speakers scheduled to be in Quebec City at the end of the month have been advised by Muslim Brotherhood leaders in Tunisia or elsewhere in the past or are linked to their network?

Point de Bascule (March 12, 2015): Congrès maghrébin au Québec: Two governors of the Muslim organization chosen by the Couillard government to fight radicalization are arrested by UPAC for a second time [Article in French]

A sample of ideologues being promoted by CSID

At the beginning of the nineties, Muslim Brotherhood spiritual guide Youssef Qaradawi stated that, at this stage, technological weaknesses prevent the Muslim world from launching military offensives comparable to those of the past against non-Muslim countries (see: we depend on others for military power). Nevertheless, Qaradawi expressed his confidence that the Muslim world would be able to conquer Europe with an ideological offensive.

In 2002, Qaradawi presented the current Islamist offensive in Europe as a continuation of the Islamic military offensives of the past / Archive.Today. This is the context in which the ideological offensive waged by CSID must be understood.

Youssef Qaradawi: “Islam will return to Europe as a conqueror and victor, after being expelled from it twice – once from the South, from Andalusia [Spain – 1492], and a second time from the East, when it knocked several times on the door of Athens [1830]. […] I maintain that the conquest this time will not be by the sword but by preaching and ideology.”

Here is a sample of ideologues who have been associated with CSID or promoted by it over the years. We have consulted Global Muslim Brotherhood Daily Watch (GMBDW) for this portion of the article. This specialized website provides an extensive coverage of CSID’s activities.

JAMAL BARZINJI (1939-2015) and TAHA AL-ALWANI (1935-2016) – On April 21, 2016, CSID gave an award posthumously to its founders. Both men also played a key role in the establishment of the Muslim Brotherhood in North America and they founded the International Institute of Islamic Thought (IIIT). Bio Barzinji / Bio Al-Alwani

Ian Johnson, the author of A mosque in Munich, a book dedicated to the beginnings of the Muslim Brotherhood in Europe, describes the IIIT’s “real task” as “provid[ing] the theoretical underpinnings for the spread of Islamism in the West.” The IIIT is listed in an internal Muslim Brotherhood memorandum among 29 organizations described as being part of the Brotherhood’s infrastructure in North America (see the last page of the memorandum). This document was seized by police and produced for evidentiary purposes in a terrorism trial that led to the convictions of all leaders accused of terrorism financing in 2008.

Muslim Brotherhood Mission statement for North America (Section 4.4 of the memorandum): The process of settlement is a “Civilization-Jihadist Process” with all the word means. The Ikhwan [Muslim Brotherhood] must understand that their work in America is a kind of grand Jihad in eliminating and destroying the Western civilization from within and “sabotaging” its miserable house by their hands and the hands of the believers so that it is eliminated and God’s religion is made victorious over all other religions.

RACHID GHANNOUCHI – GMBDW has listed several CSID events featuring Tunisian Islamist leader and founder of the Ennahda party, Rachid Ghannouchi (March 2012, June 2013, March 2014, etc.) The Obama administration greatly facilitated the penetration of the Muslim Brotherhood within government agencies, so U.S. officials also took part in some of CSID events featuring Ghannouchi in Washington. Contrary to the Obama administration, the Canadian government (under a Liberal administration) blocked Rachid Ghannouchi from entering the country in 1998 due to his terrorist background.

In its 2003 refusal to grant refugee status to one of Ghannouchi’s lieutenants, the Federal Court of Appeal described Ghannouchi as “[Section 20] a terrorist who is an integral part of the international Islamist movement [and who] is regarded by some sources as one of the masterminds of terrorism. Mr. Ghannouchi has called for violence against the U.S. and threatened to destroy its interests in the Arab world. He has also demanded the destruction of the state of Israel.”

Section 21 of the same legal case lists several terrorist activities waged by Ghannouchi’s Ennahda organization in the eighties and the nineties: bombing attacks in France and Tunisia, arsons on cars and building, throwing acid in people’s faces, physical attacks in schools and universities, the use of Molotov cocktails, etc.

TARIQ RAMADAN – CSID has invited Islamist leader Tariq Ramadan in February 2010. In a 2004 interview, Ramadan told Egypt Today that Islamists operating in Canada must use the Canadian legal framework (“one of the most open in the world,” Ramadan highlighted) to subtly and gradually introduce rules of sharia in Canada. At the time, Tariq Ramadan strongly urged his supporters in Canada not to openly mention their commitment to sharia: “The term shariah in itself is laden with negative connotations in the Western mind,” said Ramadan. “There is no need to stress that. […] For the time being this is not how we want to be perceived,” he added.

In a speech given in Detroit in 2013, Tariq Ramadan defined jihad as “the way we implement sharia.” Ramadan’s formulation has the advantage of including violent and ideological methods used by Islamists to reach their goal.

On July 27, 2011, in a speech given at a fundraiser organized by the Islamic Circle of North America in Dallas, Tariq Ramadan openly enjoined his supporters to colonize the United States of America “with our understanding of Islam, our principles.”

In a speech given on Day 1 of the Islamist RIS Convention in Toronto in December 2013, Tariq Ramadan clearly told his supporters that “We [Muslims] are not here to be accepted. We are here to change the society.” (Video TR 48:56 – Excerpt on PdeB)

FATHI OSMAN (1928-2010) – Fathi Osman has been a member of CSID board and a leader of many other Muslim Brotherhood-linked organizations (UASR, MPAC, etc.) In 1999, Osman contributed an article for an edition of Islamic Horizons (ISNA’s “flagship bi-monthly magazine”) dedicated to the Muslim Brotherhood founder, Hassan Al-Banna. Al-Banna was being described as “a True Guide” by the magazine. In his piece, Osman presented Al-Banna’s proposal to dissolve political parties as an illustration of Al-Banna’s ‘emphasis on democracy’! No less. Al-Banna advocated the dissolution of political parties “so they could emerge as a single entity serving according to the guidance of Islam”. The “channelling of the political forces of the nation into a common front and a single phalanx” is also the first proposal in Al-Banna’s 50-point Manifesto. The fascist influence can be perceived not only in the proposal itself but in the terminology used to express it. Al-Banna’s Manifesto was published in 1936 while Hitler’s popularity was considerable in the Arab world. In his book To What Do We Invite Humanity?, Al-Banna presented Adolf Hitler as a model to his supporters looking for “success and fortune.”

Aside from being on the expert committee of the Quebec-UNESCO conference on ‘Internet and the radicalization of youth’ scheduled to take place at the end of October in Quebec City, Herman Deparice-Okomba is also the Executive Director of the Montreal-based Centre for the Prevention of Radicalization Leading to Violence (CPRLV).

In this capacity, Mr. Deparice-Okumba has access to all the information needed to understand the situation we are in and the seditious program waged by CSID in the U.S., in Tunisia and obviously in Canada. His involvement with CSID is inexcusable.

After the Quebec Government’s refusal to release the list of speakers who will address the Quebec-UNESCO conference on radicalization, the involvement of a conference coordinator with Islamists gives another reason to be suspicious about the conference’s real purpose.

Hashtag of the Quebec-UNESCO conference on Internet and radicalization: #confqcunesco

Point de Bascule (October 12, 2016): #confqcunesco – The Government of Quebec refuses to identify the speakers who will address the Quebec-UNESCO conference on Internet and radicalization [Article in French]