Muslim scholar Hamza Yusuf at RIS 2014 Islamist convention in Toronto: “When you are powerless, non-violence is the best way to approach your enemies.” 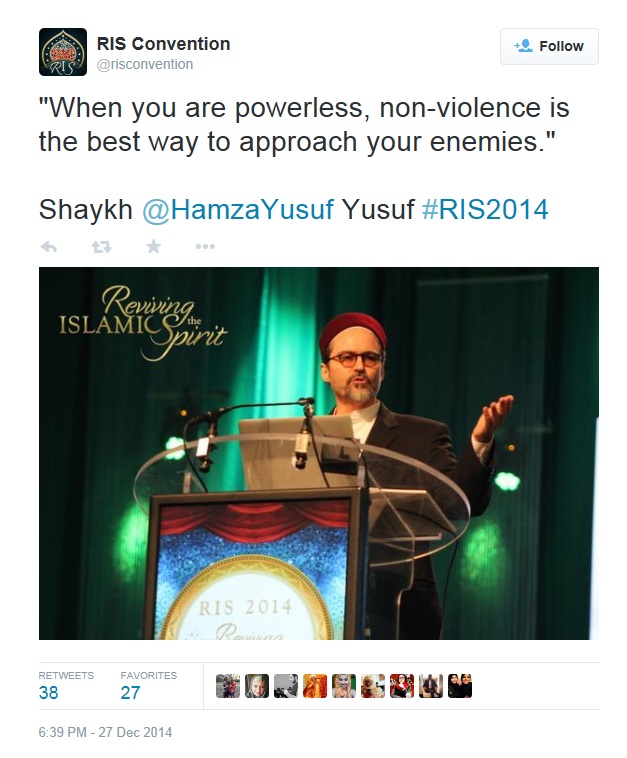 Hamza Yusuf ’s message was one of many excerpts of speeches tweeted by the organizers of the recent Reviving the Islamic Spirit (RIS) convention held in Toronto at the end of December 2014.

In 2013, Hamza Yusuf introduced Abdullah Bin Bayyah to Bill Gates as his “teacher,” whose mission he described as “eliminat[ing] diseases of ignorance with the vaccines of ideas!”

When Bin Bayyah was invited at the White House by the Obama administration also in 2013, the Investigative Project on Terrorism presented a different picture. It highlighted many past statements made by Hamza Yusuf’s “teacher” favorable to armed jihad, including a fatwa dated January 19, 2012, in which Bin Bayyah stated that Muslims can satisfy their charitable obligations by giving money (zakat) to those who are engaged in armed jihad, so that they can “buy weapons” and fulfill other needs.

Bin Bayyah was invited at the White House in spite of the fact that he is the vice-president of the International Union of Muslim Scholars (IUMS), an organization whose leader, Muslim Brotherhood spiritual guide Youssef Qaradawi, is banned from entering the United States due to his numerous statements in favor in terrorism in the past.

Bin Bayyah’s IUMS has expressed its support for Hamas on numerous occasions in the past. Aside from being engaged in the destruction of Israel (article 13), Hamas’s leaders have frequently advocated an Islamic conquest of the West (2006 – 2008 – 2011 – 2012). In 2011, for example, Hamas leader Mahmoud Al-Zahhar said on TV that Western civilization “will not be able to withstand the great and glorious Islam.” On July 16, 2013, Hamas threatened to launch terrorist attacks in countries where Israel’s embassies are located. Canada is among the potential targets, of course.

A praise of Abdullah Bin Bayyah by President Obama was incorporated by RIS organizers in a trailer of their recent convention (Video 2:03).

Hamza Yusuf stated that, when Muslims are weak, they should resort to non-violence in order to challenge their enemies. The corollary, of course, is that as they get stronger, they should start using violence. This principle was clearly stated by Youssef Qaradawi in a 1990 speech that he gave in Algeria and that became the base of his book Priorities of the Islamic movement in the coming phase. Qaradawi explained that one of the political principles brought to this earth by Islam is “changing wrong by force whenever possible,” wrong being what is incompatible with sharia, of course.

Muhammad Taqi Usmani, a former Pakistani judge, has also stressed in his book Islam and Modernism that the decision to use force against non-Muslims is strictly based on an assessment of Muslims’ military capabilities.

It was highlighted by the London Times in 2007:

Justice Muhammad Taqi Usmani argues that Muslims should live peacefully in countries such as Britain, where they have the freedom to practise Islam, only until they gain enough power to engage in battle.

After the conclusion of his book was made public by the Times, Usmani blamed the translation of his book from Urdu to English for providing a different connotation to his writings.

Usmani is identified by the Muslim Community of Quebec, one of Montreal’s oldest Islamic institutions, as one of its “sharia concillor” (sharia advisor). 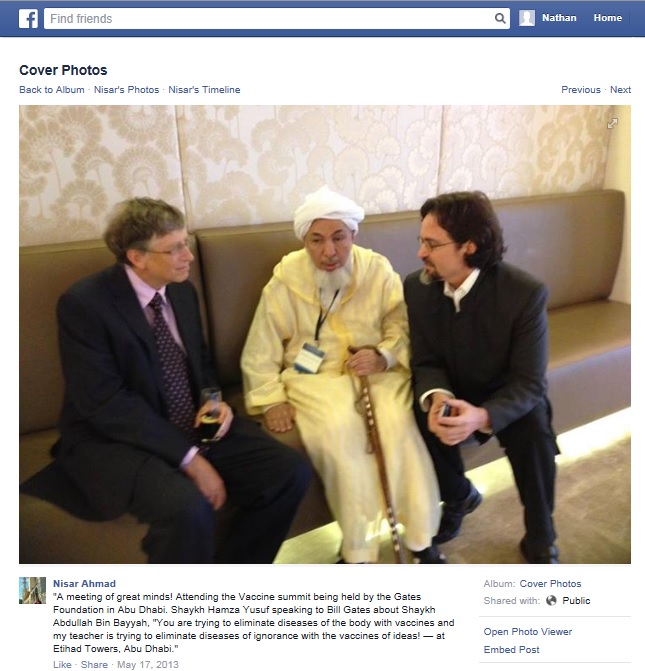