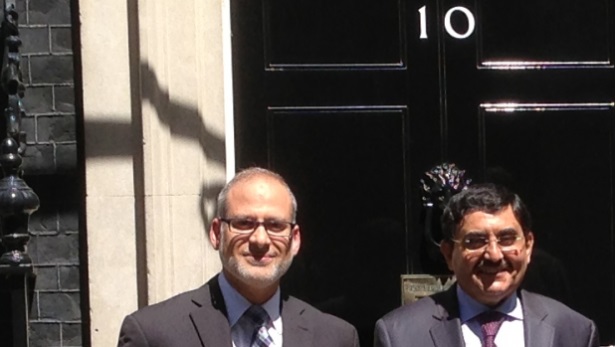 On June 5, 2013, Wael Haddara (left), senior advisor to then Muslim Brotherhood-backed Egyptian President Morsi and Essam El-Hadad (right), the President’s assistant on Foreign Affairs, stood in front of 10 Downing Street, after a meeting in preparation of Morsi’s visit in the UK. Morsi was ousted from power before his visit could take place.

On April 1, 2014, “[British PM] David Cameron […] ordered Whitehall officials to launch an investigation into the Muslim Brotherhood – drawing on assessments by MI5 and MI6. […] The Times reported that MI6, Britain’s overseas intelligence agency, would examine claims that the Muslim Brotherhood was behind the bus attack in Egypt. MI5 will assess how many leaders have been based in Britain after last year’s coup in Egypt in which Mohamed Morsi, the Muslim Brotherhood president, was ousted.”

After Cameron’s announcement of an investigation into the Muslim Brotherhood, reports were published that demonstrate how pervasive the Brotherhood’s influence is within the British public administration.

According to Middle East Eye, on June 5, 2013, while Muslim Brotherhood-backed Egyptian President Morsi was still in power, his advisor Haddara, and Essam El-Hadad, President Morsi’s assistant on Foreign Affairs, met with John Casson, (the British Foreign Affairs Secretary), in 10 Downing Street in preparation for a visit by Morsi in July 2013. Morsi was ousted from power before his visit could take place.

On May 17, 2013, UK Prime Minister Cameron himself had initiated a series of meetings between Downing Street officials and senior members of the Brotherhood. That day, Cameron had invited Gehad El-Hadad (Essam El-Hadad’s son) to lunch after a prime ministerial seminar in which this Brotherhood representative and others presented their vision. According to the Middle East Eye, “the prime minister asked what Britain could do to support [the Muslim Brotherhood’s vision].”

Also present at the seminar was Maajid Nawaz, the co-founder of the Quilliam Foundation.

On April 1, 2014, the same day that PM Cameron announced the launch of an investigation into the Muslim Brotherhood, GMBDW highlighted the fact, that in the previous week, Muslim Brotherhood leader Tariq Ramadan had been appointed on a new Advisory Group on Freedom of Religion or Belief chaired by Senior Minister of State, Baroness Warsi.

On April 13, 2014, The Telegraph published an article stressing that Tony Blair was facing accusations that his multi-faith charity, the Tony Blair Faith Foundation, has links to the Muslim Brotherhood being investigated by MI5 and MI6. This article was based on a 2009 GMBDW report.

In 2011 in Canada, the Tony Blair Faith Foundation joined forces with two Islamist organizations, Wael Haddara’s Muslim Association of Canada (MAC) and Muslim Presence established by Tariq Ramadan. Together, and with others, they sponsored the 2nd Conference on World’s Religion at McGill University in Montreal. One goal of the conference was to promote a resolution forbidding the criticism of religions. At the time, a group of high profile intellectuals opposed the resolution and issued a public statement explaining their opposition:

If this principle were to be adopted and turned into law, it would open the door to a wide range of blasphemy-type criminal and other legal proceedings. This is because it would suffice to claim that a criticism of religion was “denigrating” to justify legal action. In effect, this Declaration immunizes religion from criticism.

These measures embrace the line promoted for many years by the Organization of Islamic Cooperation (OIC). The OIC represents 56 Muslim majority countries and it pressures non-Muslim countries at the United Nations and in other international forums to prosecute their own citizens for blasphemy if they criticize Islam. Article 22a of the OIC Declaration on Human Rights in Islam reads as follows: “Everyone shall have the right to express his opinion freely in such manner as would not be contrary to the principles of the Shari’ah.”

Before Wael Haddara, other prominent Muslim Association of Canada leaders, such as Jamal Badawi, played important roles outside of Canada within the Muslim Brotherhood international network. The MAC also frequently invites important Brotherhood leaders from other countries, such as Ahmed Jaballah (France – Profile on GMBDW), Salah Soltan (Bahrain, Egypt – Profile on GMBDW).

In 2012, when he was president of the Muslim Association of Canada, Wael Haddara issued a press release to deny MAC’s links with foreign Islamist organizations:

In 2004, MAC has openly defended Hamas in a press release more than a year after the Canadian government added the organization to its terror list on November 27, 2002.

According to GMBDW, a website monitoring the Muslim Brotherhood around the world, aside from Hamas (Charter – Article 2), the Muslim Association of Canada is one of the rare sections of the network openly acknowledging its links with the Brotherhood.

MAC’s […] modern roots can be traced to the Islamic revival of the early twentieth century, culminating in the movement of the Muslim Brotherhood. […] MAC adopts and strives to implement Islam, […] as understood in its contemporary context by the late Imam, Hassan Albanna [1906-1949], the founder of the Muslim Brotherhood. MAC regards this ideology as the best representation of Islam as delivered by Prophet Muhammad.”